A rally was held for the man friends and family knew as "Dan Dan." Daniel Hambrick was shot and killed by an officer with the Metro Nashville Police Department Thursday. Saturday night, the 25-year-old’s memory was honored by the community.

A rally was held for the man friends and family knew as "Dan Dan."

Daniel Hambrick was shot and killed by an officer with the Metro Nashville Police Department Thursday. Saturday night, the 25-year-old’s memory was honored by the community at a rally at Watkins Park.

Many of those in attendance said they want answers, justice, and change.

According to the TBI, Hambrick was shot and killed by Metro Officer Andrew Delke. Authorities had been in the North Nashville area searching for stolen vehicles when they saw a vehicle driving erratically.

They attempted to stop the vehicle, but it continued to drive away, the TBI said.

Officials expanded their search and found the vehicle, and a video reportedly showed the men getting out of the vehicle as an officer entered the parking lot. One of the men, likely Hambrick, turned and ran.

Investigators said a foot pursuit ensued, and based on the video, Hambrick appeared to have a “dark-colored object” in his hand.

At some point, the situation escalated and resulted in Delke firing his weapon multiple times.

Hambrick was struck and died a short time later.

At the rally Saturday, Sheila Clemmons, the mother of Jocques Clemmons, spoke. Clemmons was shot and killed by a Metro police officer during a traffic stop in East Nashville in February 2017.

“It’s got to stop, and it’s going to take the people of our communities — east, west, north, and south — to come together and get this community oversight board. It will be put in place,” she said.

She added — concerning the delayed formation of a community oversight board — she believes the police do not want to be held accountable “because they’re the ones policing themselves, and if someone else is watching over them, they don’t want that. They don’t want it.”

She also expressed why she felt it was important for her to attend the rally for Hambrick.

“This right here brought back so many memories, and my heart goes out to this family,” Sheila said. “He’s not my son, but he is my son, and no mother, whether he’s murdered by people on the street or by law enforcement, should ever have to go through this.”

The rally turned into a protest as a group of people called for the community oversight board. They blocked the street near the park Saturday night.

Those at the scene said the protest was peaceful. Metro officials said they were on the scene to make sure everyone was safe and stayed on the sidewalk. 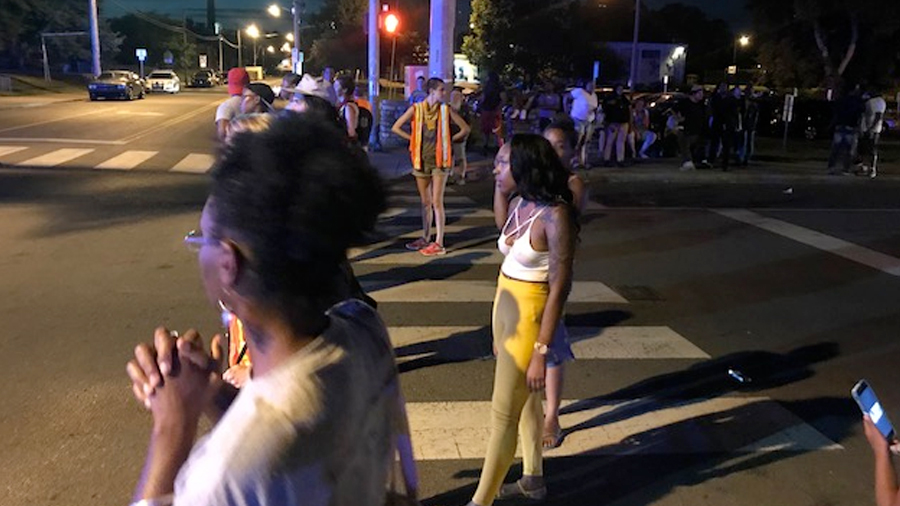 The protesters said they want to stay there until the issue is resolved. Police said they were okay with people staying, as long as they do not block the street.