TomKats Hospitality is renovating the historical Woolworth building in downtown Nashville, which was the site of several student sit-ins. 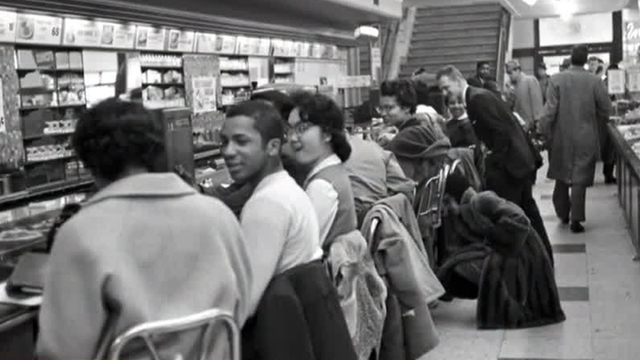 More than 100 students from Nashville's black colleges and universities held the first sit-ins at "white-only" lunch counters on February 13, 1960. Congressman John Lewis took part and was among those arrested.

The basement will allow for a dance floor, and host jazz, gospel, Rock N' Roll events - as well as artistic spoken-word performances and private events.

"This gives us the opportunity to come together as one and focus on what we enjoy together food, music, dance," Morales said.

What Morales said he's most proud of is preserving part of the building's history and honoring participants - like Congressman Lewis and local students like King Hollands - with the new restaurant concept.

"This is the lunch counter right here. This is the original," he pointed to the once segregated countertop.

"They had cigarettes put out on their head. They had syrup poured on their heads. Ugly, ugly situation but what was unique was their training. They came in suits and ties and they were trained not to react," Morales said.

King Hollands was a sit-ins participant who was also a former Father Ryan High School classmate of Morales in 1954.

"The philosophy itself was very appealing to me because it was a method in which everyone had an opportunity to interact and understand and to benefit from the movement," Hollands said.

Hollands was part of the first Nashville integrated class after the Brown v. Board of Education decision.

Growing up alongside classmates like Hollands, Morales said he empathized with the demonstrators.

"By his actions and his real bravery when I went to Father Ryan, we were 30 percent African-American and I think all that prepared me for life going forward and being able to be multi-dimensional in terms of my relationships," Morales said.

Walking through the restaurant, you will also see original railings, terrazzo tiles and vintage wallpaper.

"When I was 19 and participated in the first sit-ins movement I really wasn’t aware of what was going on in the civil rights movement because I was sheltered," she said.

On Feb 27, 1960 Henry hopped off a bus and ran into Diane Nash who asked her to join the sit-ins movement.

Demonstrators had already packed the Woolworth's counter so the two went to McClellan. There, Henry sat next to a white protester.

"He said they may spit on you and they may kick you and I'm saying to myself 'please don't let them do that to me'" she recalled.

Henry, a retired Metro school teacher of 40 years, remembers a woman lighting matches down her back.

Students were beaten, but taught not to fight back.

During the day, police arrested 79 protesters at the lunch counters but no attackers. After the first group was hauled away, more students walked in and sat down.

"And there's an alley that runs behind all the stores along Fifth Avenue. Sometimes that second group would be in the alley because on the 27th of February, we knew that they were going to be arrests made," participant Ernest Patton said.

Patton calls the sit-ins a God sent movement since many of the organizers never planned to come to Nashville.

"I think it's very significant at least a piece of this will be preserved," Hollands said.

And preserving the restaurant's history is what Morales intends to do.

Both Patton and Henry said they want today's younger generation to know why they sat down to stand up for change.

"My grandparents said if you don’t know your history, you what, repeat it," Henry said.

"It only takes one person to start a movement. If you have a passion to do something then you have to find other people who agree with you or want to work with you on that passion," Patton said.

On May 10, 1960  Nashville was one of the first major cities to desegregate lunch counters.