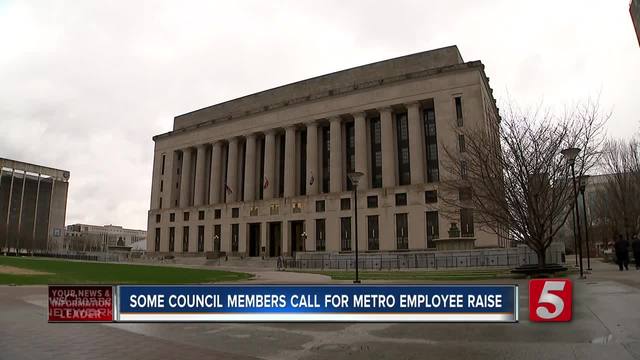 A group of Metro Council members feel if the City of Nashville can offer a $15 million dollar tax incentive to Amazon, then Metro employees should get a 3 percent pay raise.

A group of Metro Council members feel if the City of Nashville can offer a $15 million dollar tax incentive to Amazon, then Metro employees should get a 3 percent pay raise.

The State of Tennessee and the City of Nashville plan on offering Amazon up to $102 million in tax incentives if the company brings 5,000 jobs here for a logistics facility.

A 3 percent pay raise for Metro Employees was shot down months ago.

Metro Council Member Steve Glover feels Metro Employees should get a cost-of-living adjustment so he spearheaded a written motion.

"It's kinda ironic that the conservative member on the council is fighting to make sure that we are taking care of our employees, when normally it's the other way around," Glover said.

Council Members Freddie O'Connell, Robert Swope, and Brenda Haywood agree that Metro Employees should get a raise, and their names are on the resolution.

"If we keep chipping away at the foundation of our city on what holds us up, first responders, teachers, schools, those things… we don't have a city down the road," said Glover.

It would cost the city $18 million to give Metro Employees the 3 percent pay increase according to Councilman Glover.

Mayor David Briley's spokesperson, Thomas Mulgrew, issued us a statement: "While we are sensitive to the issue of the cost of living raises, these two things are separate matters and should be treated as such. Therefore, we are not supportive of this resolution."

Glover said incentives and pay raises come out of the operational budget.

He said the pay increase was promised, and he feels the Metro Council hasn't delivered.

Glover said, "I'm not backing down!"

The pay raise would not include Metro Council members.

In a statement released by the Nashville Fraternal Order of Police on Wednesday, Glover's sentiment is mirrored. The statement reads, " [W]e were disappointed to learn that this selection came with incentives that included $15 million dollars in corporate welfare to this multi-billion dollar corporation...Continuing to give these handouts to private companies place unnecessary burden on the Nashville community and its employees. Especially in a year when employees were once again told that the promised cost of living adjustments would not be honored by the budget."

The statement goes on to call on Mayor Briley, Vice Mayor Schulman, and all other members of the Metro Council who support this legislation to take action and provide those working for the metro government with what they were initially promised: "After years of frozen increments and failed promises to these hard-working men and women, we are no longer able to accept the fact that existing commitments to metro employees are ignored while our leaders seem all too eager to extend new commitments that do not include the Metro's workforce."

The resolution will go before the budget committee and the council this week.