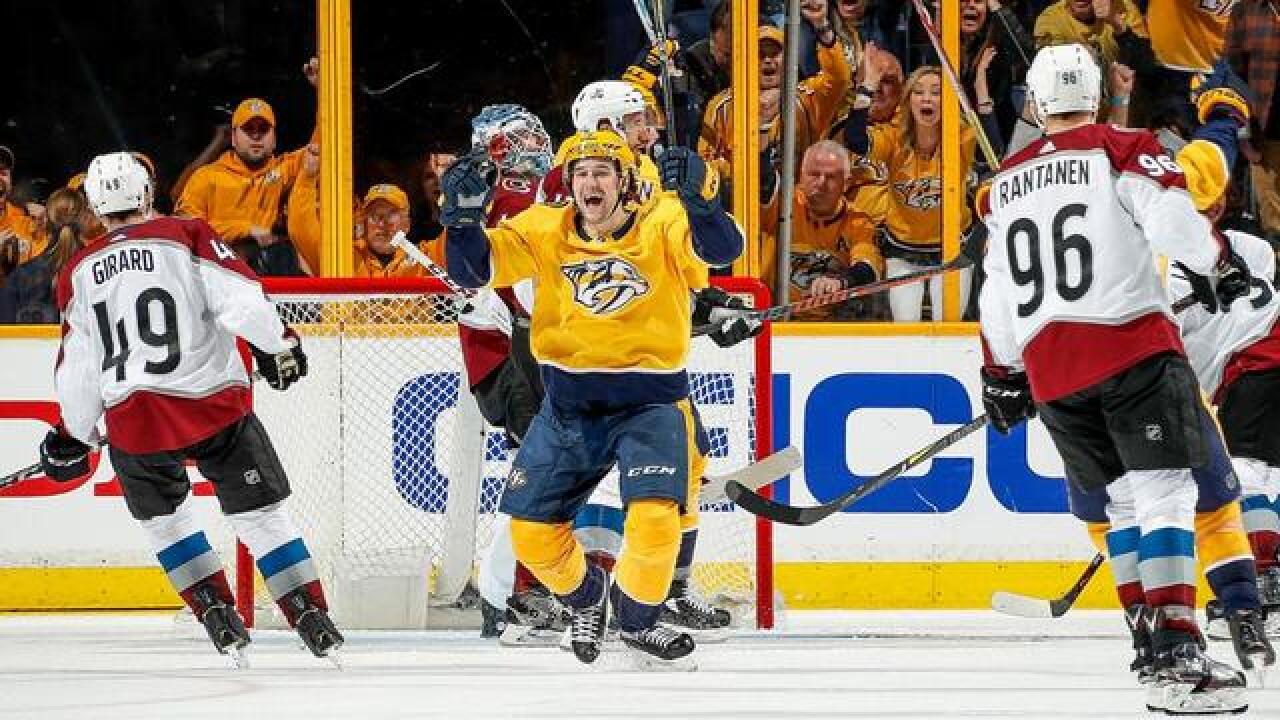 Copyright 2018 Scripps Media, Inc. All rights reserved. This material may not be published, broadcast, rewritten, or redistributed.
&lt;p&gt;Photo: NHL&lt;/p&gt;

They came to Broadway late in the afternoon and packed Bridgestone Arena more than 30 minutes before faceoff anticipating the start of another magical postseason. But then the 17,000-plus dressed in gold were forced to sit and wait for their heavily favored Predators to get into gear.

For nearly two periods things seemed just a bit off with the President’s Trophy winners, but finally Craig Smith’s power play goal tied the game with 11:10 left in the second period, and the Predators took over in the third for a 5-2 win over a game Avalanche team in game one of their opening round series.

“I think the power play goal (settled us in,” Predators forward Colton Sissons said. “I think that’s what turned the tide and got us going.”

Filip Forsberg scored a pair of third period goals, the first off a deflection of a Roman Josi shot from the point to give Nashville the lead with 13:52 left. Just over 6:00 later Forsberg schooled former teammate Sam Girard on a beautiful goal that all but put the game away.

Sissons’ empty-net goal with 1:57 left  capped the scoring on the Predators 11th straight win over the Avalanche.

It has to be a bit of a demoralizing loss for the eighth-seeded Avs that looked like the experienced playoff team early on with crisp passes and a dogged forecheck while the Predators’ rhythm seemed off, highlighted by missed chances and way too many turnovers.

The Avs struck first on one of those miscues, with a quick counter attack goal from Nikita Zadorov on their first shot attempt of the game. Pekka Rinne appeared to have been screened on the play reacting late to Zadorov’s blast from above the right circle on a drop pass from Mikko Rantanen.

Nashville’s problems continued with a pair of penalties late in the first period on Mattias Ekholm and Austin Watson. But the Predators were able to kill both off, including :19 of a 5-on-3, to give them some life to start the second period.

Less than 3:00 into the second Matt Irwin saved a would-be Avalanche goal when a puck rolled down Rinne’s back and sat precariously in the crease. Alexei Emelin cleared the puck and moments later Watson rifled a shot past Jonathan Bernier to tie the game 1-1.

Colorado quickly answered as they were still announcing Watson’s goal, Blake Comeau tipped a Carl Soderberg shot past Rinne for a 2-1 lead.

But Rinne kept them in the game with several key saves on point blank chances and the Predators caught a break midway through the period when Avs’ star Nathan MacKinnon was whistled for slashing. Just ten seconds into the power play Ryan Johansen found Smith in front of the net to tie the game at 2-2, igniting a Smashville crowd that was waiting for a reason to explode.

And the third period flurry was reminiscent of past playoff performances in this building where the Predators just simply find another level.

After struggling through the first period and change, the Preds looked like the best team in the NHL for the last 32:00 Thursday night.

“We got better every period, so that was good,” Predators coach Peter Laviolette said. “I give our guys a lot of credit for staying with it.

They worked through their first game jitters as the team now being hunted as the favorite in these playoffs and came out with a win.

The Predators can and need to play better, they know that. But this wasn’t a bad start.