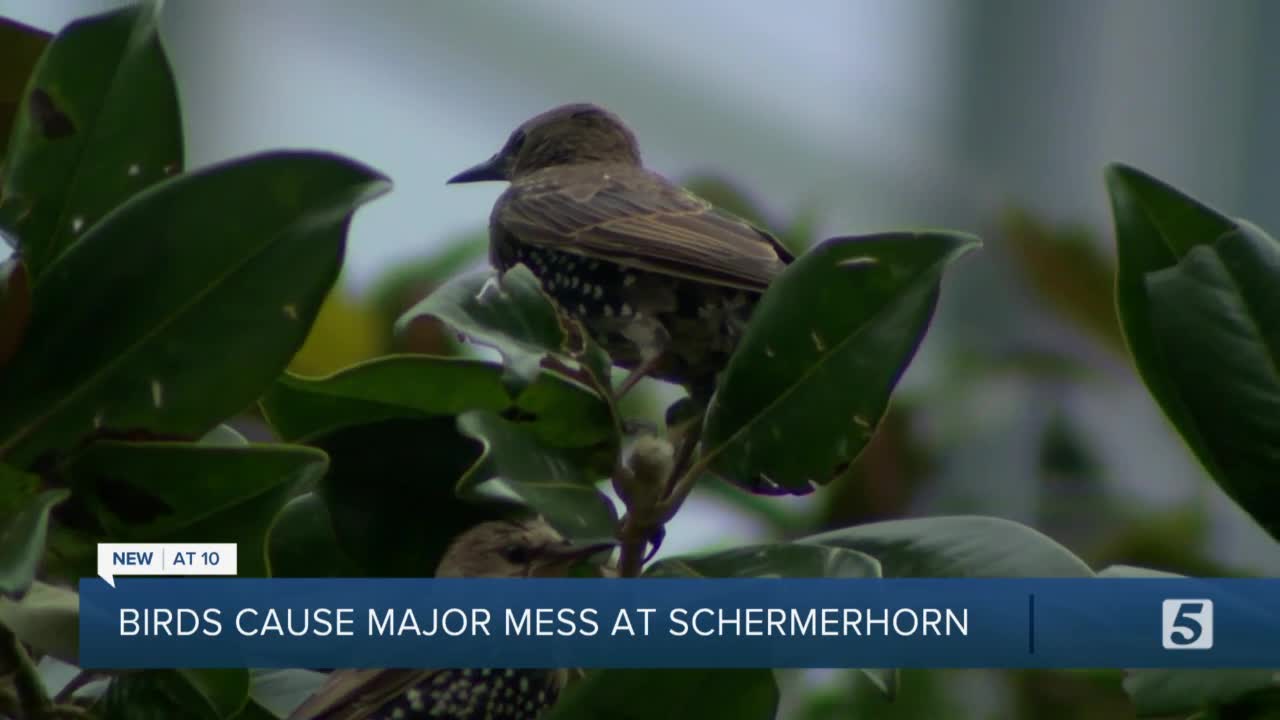 Every night for the past several weeks, around 150,000 birds have roosted in the trees outside downtown Nashville's Schermerhorn Symphony Center. 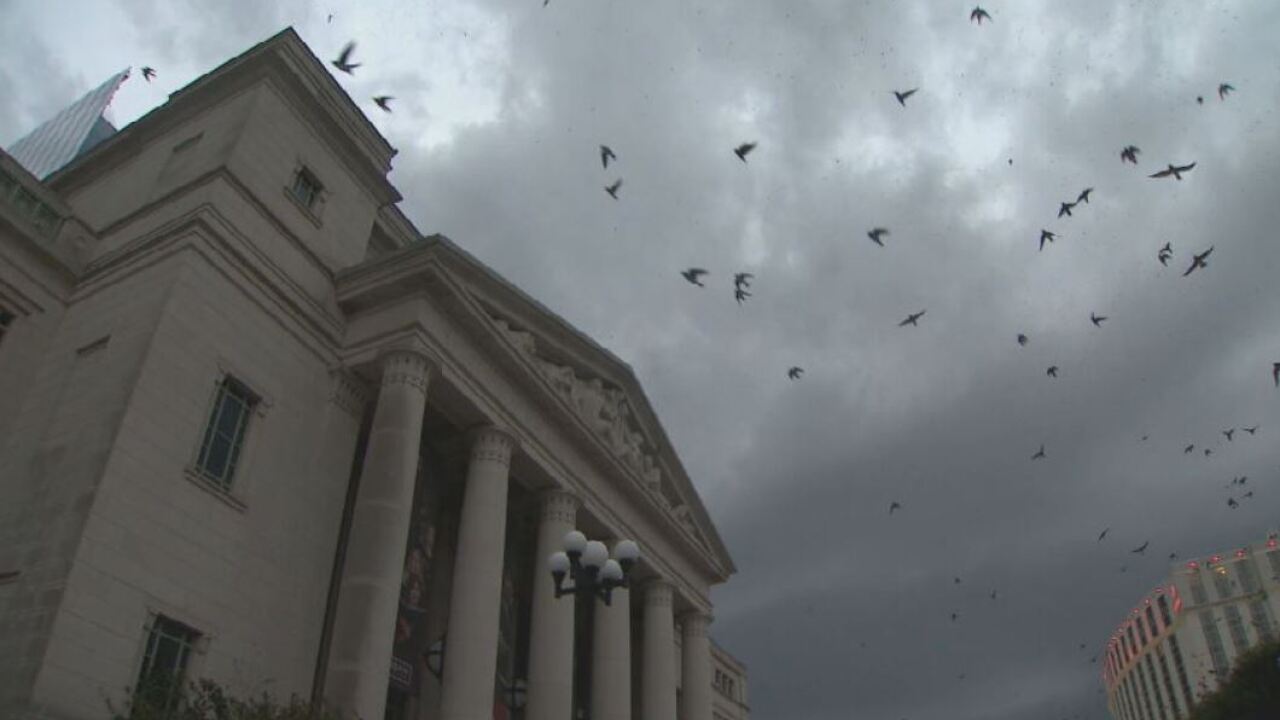 NASHVILLE, Tenn. (WTVF) — Even though COVID-19 has closed the Nashville Symphony, on Thursday night visitors showed up to see a performance outside of the Schermerhorn Center in downtown Nashville.

Every night for the past several weeks, around 150,000 birds have come to roost at the concert hall, creating a soaring symphony of their own. The birds are purple martins, and the Schermerhorn is a stop before they begin their migration to South America.

.@EricHiltNC5 and I may have been pooped on during this shoot today. But it was worth it. @NC5 🐦 pic.twitter.com/Gvfogr2lNi

But the aerial show leaves a mark on the symphony center, and the number one problem is the birds' number two.

"The droppings are sort of everywhere," Nashville Symphony CEO Alan Valentine said. "The grounds are completely covered, especially near the trees."

The droppings also cover railings, fountains and even the building's windows.

"That's both an aesthetic and a public health kind of issue," Valentine said.

Those issues are why Valentine at first wanted to have the birds removed, thinking they were common starlings, who are no stranger to causing trouble in Nashville.

"We were really concerned about the damage to the property that was occurring," Valentine said. "We have had in the past, of course, flocks of starlings roosting in our trees, and that’s been a little problematic for us."

But when contractors came out to start removal work, conservation groups like the Tennessee Wildlife Federation (TWF) raised a red flag. The group told the Nashville Symphony that the purple martins are federally protected, and disturbing them could injure the birds.

"We don't want to disturb them while they’re here, we want to make sure they’re in a good healthy state before they start their journey South," TWF Chief Development Officer Kendall McCarter said.

"We responded of course by stopping the effort to drive them away, and we’re really grateful to learn about these magnificent birds," Valentine said.

But the magnificent birds still leave a magnificent mess that could cost thousands to clean up, and it comes when the Nashville Symphony is already struggling because of COVID-19.

"We are currently shut down," Valentine explained. "The pandemic has had an incredible impact on our institution and we’ve had to furlough musicians and staff, and are really in a mode of trying to make sure we survive this pandemic."

So the TWF and the Nature Conservancy of Tennessee started the fundraiser to help pay for cleaning costs.

"It's really a bad time for a lot of nonprofits, the symphony is one of those that’s been affected by COVID. As birders and conservationists, we’d like to pitch in and help contribute to this cause and help defray some of this cost," McCarter said.

The TWF also plans to work with the Nashville Symphony to mitigate future damages from possible purple martin roosts.

"[The help] is absolutely critical and it just changed the entire conversation for us, from one when we were really focused on, 'oh my gosh how are we going to pay for this? How are we going to deal with this?' to one of, 'okay how can we make this a really interesting experience for our community?'" Valentine said.

What is the purple martin?

The purple martin is the largest member of the swallow family and have a long history with humans. The birds rely on humans to make their nests, and their connection with humans goes back to Native Americans.

"Native Americans would hang gourds in their villages to encourage purple martins to nest there," TWF administration manager Tony Lance said. "Purple martins, at least in the Eastern United States, no longer nest in the wild, they're totally dependent on humans for nest sites."

Lance said that creates a bond between people and the purple martins.

"There's such an emotional attachment to them because they're totally dependent on humans for nest sites, we have thousands and thousands of people across the country who are emotionally as well as financially invested in the welfare of these birds"

The purple martin spends its winters in Brazil, and every spring migrates to the Southern United States in the early spring, according to the Audubon Society. In the fall, they return to the Amazon Basin, but before migrating South, thousands of purple martins begin gathering at roost sites, like the one at the Schermerhorn Symphony Center.

"What they're doing is trying to build up their fat reserves because they're going to go all the way from the United States to Brazil," Lance said. "They come here at night to roost, primarily for safety, and then they go out during the day and forage."

Experts said the roosting time is about a month to six weeks, and the birds will likely leave Nashville in a week or so.

Experts say there is still time to watch the purple martins before the birds leave their Nashville roost. The best time to see the birds is when the leave their roost outside the Schermerhorn Symphony Center at dawn or when the return at night. Experts say the birds will likely continue their migration South in about a week.

"If you haven't seen it, it's worth coming down to have a look," Valentine said. "Just don't get too close to the trees or you might be doing laundry when you get home!"