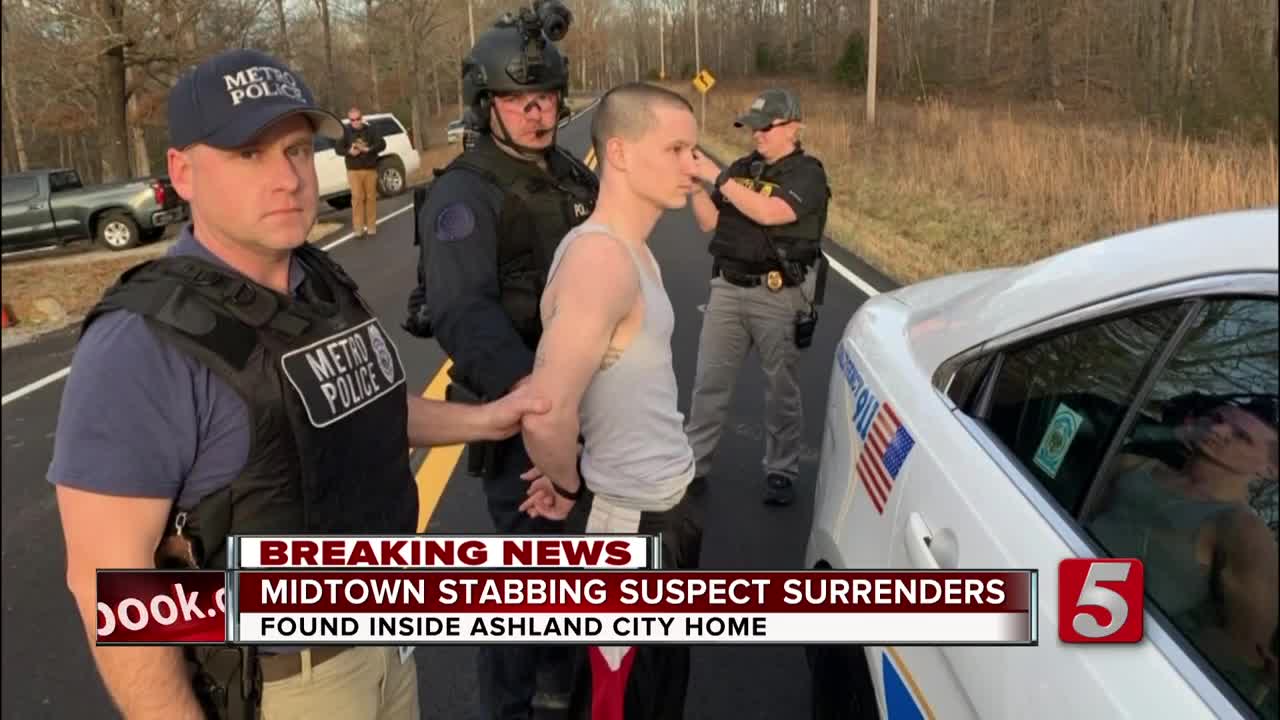 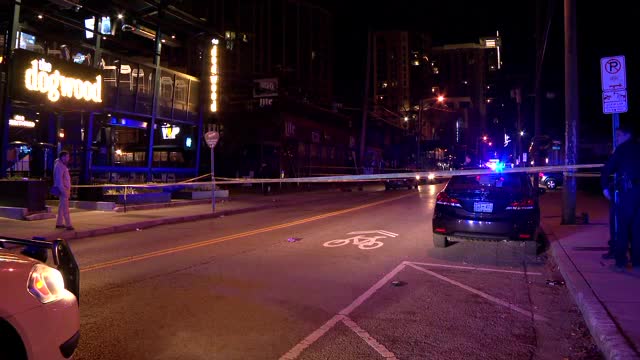 Metro police said Mosley made an unwanted advancement toward a woman inside the Dogwood bar. The woman was friends with the victims. Around 3 a.m., the argument, the argument led to a fight outside the bar on Division Street, where Mobley is accused of stabbing three men.

According to court records, Mosley has a court appearance scheduled for January for a previous aggravated assault charge. That charge is in connection with a December 2018 attack of a 37-year-old woman. Metro police said he was free on a $5,000 bond for the crime when the stabbing happened.

Police released surveillance video of three men and one woman who were sought for questioning in the case. Police said they have already spoken with one man and the woman seen in the video. Based on public tips, they were able to identify everyone in the video except the man in the Nike sweatshirt. Police said Mosley is one of the four seen in the surveillance video.

The third victim, Bethurum, a UT Knoxville student, said he is continuing to recover.

"I wish that everyone would pray for the families of my friends who were lost in the incident," Bethurum told NewsChannel 5.

All three were 2016 graduates of Battle Ground Academy in Franklin.

"We are devastated by this tragic loss to our community," Head of School Will Kesler said in a statement. "No one should have to endure such a terrible loss of loved ones. We pray for the families and their friends for strength, support, and guidance through this most difficult time."

The BGA Football Family is praying for the Beathard and Trapeni families. https://t.co/QdenDDJkTD

After graduation, Trapeni attended Rhodes College in Memphis and Beathard was a student at Long Island University.

Beathard, a standout football player at BGA, was named Tennessee's Division II Class A Mr. Football in 2014. He went on to play football at several colleges, most recently as a Pioneer at LIU.

Bryan Collins, head football coach for LIU, reacted to Beathard's death in a statement on Twitter.

"Clay had such an incredible impact within our family in such a short period of time. His love of life, people, especially his teammates, was a shining light in our program...He will be remembered always," Collins said in part.

In a statement on Twitter, the 49ers said "We extend our heartfelt sympathies to C.J. and the entire Beathard family as they cope with the unthinkable loss of a loved one"

Part of the Beathard's family statement:

"He was always worried about all of our welfare...never his own...He was never afraid of a challenge so please, all of you take on the challenge with faith in God and knowing Clay is smiling down and has your back."

Clay's brother CJ wrote on Instagram the day after a candelight vigil in their hometown of Franklin:

Clay is the sweetest, most humble, toughest, and kind hearted people this world had in it...What happened is absolutely awful and has been and will continue to be the hardest things my family and I have had to go through. But I can find some peace knowing that he is at peace in heaven right now, and I know without a doubt God will bring a whole bunch of good out of this."

Part of the Trapeni family's statement:

"Paul Douglas committed himself fully to a life of purpose, and he already knew that his purpose was to be present for the people he loved...We are so thankful for the countless prayers, messages, and stories we have received from so many."

Four businesses in the area, including the Dogwood, came together to offer a $20,000 reward for information that leads to the arrest and conviction of those responsible for the deadly stabbing. The TBI, Clay Travis and Gov. Bill Lee have each also contributed to the reward, bringing the total to $42,500.