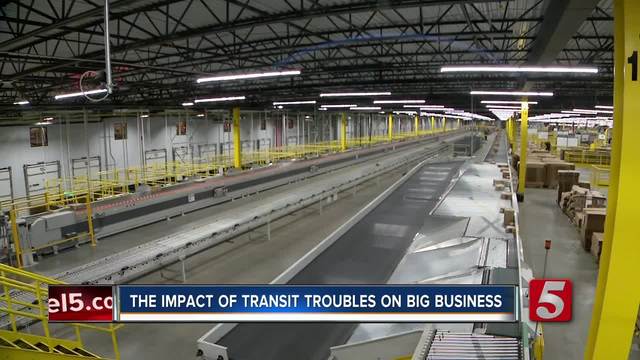 Big Businesses, like Amazon, could be deterred from coming to Nashville without some kind of mass transit.

Big Businesses, like Amazon, could be deterred from coming to Nashville without some kind of mass transit.

As late bloomers in a growing metropolitan area, experts feel Nashville has a lot of catching up to do when it comes to infrastructure.

While Music City could still be chosen for a second Amazon headquarters, some feel the failed transit vote could play a part.

Shanklin said Nashville as a whole has not embraced mass transit into their day to day culture. His son works at the Amazon headquarters in Seattle. He thinks Nashville will be one of the finalists for Amazon’s HQ2.but probably won’t end up winning the bid.

“I think  there may be others in the research triangle in the Washington D.C. area that may be more technically solid and better infrastructure with fiber and everything else that’s coming along the way. I think were going to be in the last running because we’re the it city right now but you can only be it if you keep earning that over and over and over," said Dr. Shanklin.

If the Amazon headquarters were to come to Music City, they would initially invest $5,000,000,000 into building.

"I don't honestly know how last night's vote will impact Amazon's decision, but we're pretty clear up front one of the considerations was a city with some sort of public transit system that would meet the needs of 50,000 workers," said Gov. Haslam.

"I don't think any single vote or any single decision of the city is going to keep us from being a vibrant economy and attracting people over the long run." Briley said.

An expert at Tennessee State University feels it could be a deal breaker.

“We’re about 10 to 15 years behind and coming up with a blueprint on how to set an infrastructure on moving residents around in a city," said Dr. Keith Hargrove.

Dr. Hargrove said Nashville's economy won’t grow as much as it could have.

“I don’t think business will leave because of that, but I do believe businesses will become hopefully more engaged with an alternative plan," said Hargrove.

The President of the chamber of commerce feels similarly. He said the urban sprawl could look different without mass transit.

Which is why he says we're not out of the race to win Amazon.