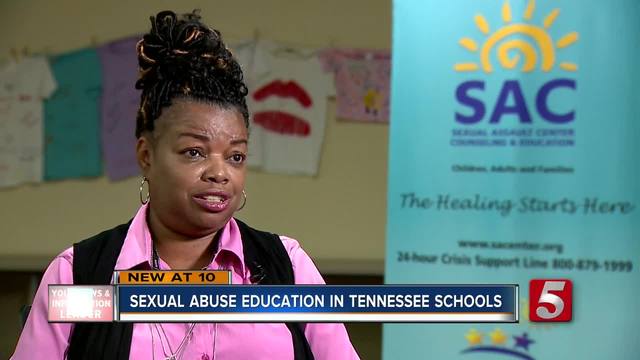 A local advocacy group has voiced its concern that Tennessee schools are skirting a state law about sex abuse education to avoid getting sued.

A local advocacy group has voiced its concern that Tennessee schools are skirting a state law about sex abuse education to avoid getting sued.

The group said Tennessee's elected leaders are to blame.

"Erin's Law", passed in 2014 requires teachers to instruct their kids about child abuse. The so-called "Gateway Law" - passed two years earlier - requires teachers to only use an abstinence-based sex education, banning discussion of any "gateway" behaviors to sexual activity.

The Sexual Assault center said that's leading some teachers in the state to not teach anything, in fear they might get sued if a student asks a question outside of "abstinence-only."

"We do have some laws that are crafted that tie the hands of teachers and educators and community people from being able to have open and thorough conversations about this topic," said Sharon Travis with the Sexual Assault Center.

But the President of the Family Action Council of Tennessee - whose group fought to pass the Gateway Law said there is a way for teachers to abide by both laws, saying in a statement:

"The gateway provision relates only to the very specific and defined subject area of family life curriculum and not to instruction on recognizing or reporting sexual assaults.  Since the 'gateway' law  only prohibits instructors from 'encouraging, advocating, urging or condoning' sexual activity among our children, I'm confident instructors can draw the line between discussing unwanted sexual activity and encouraging it."