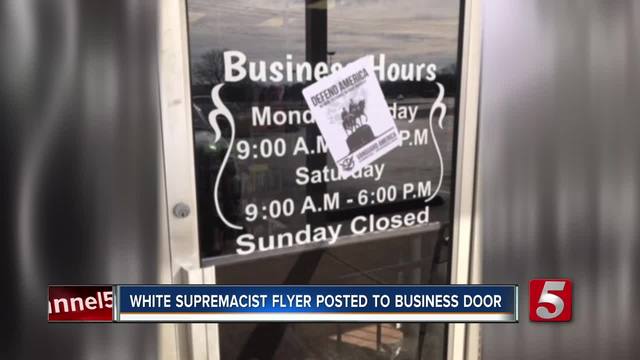 A white supremacist flyer was posted to the door of a local business. The poster, put on the door Friday, was allegedly from Vanguard America, and it said, "Defend America No More Tolerance, No More Diversity." 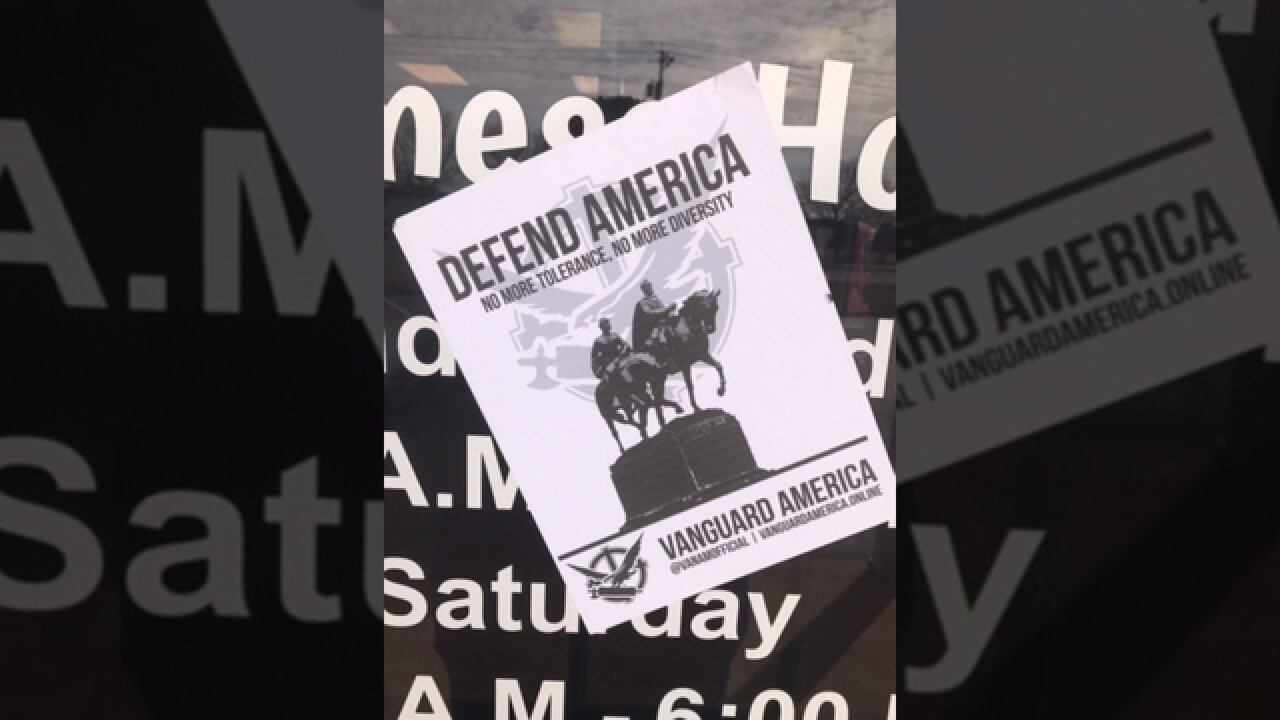 A white supremacist flyer was posted to the door of a local business.

The poster, put on the door Friday, was allegedly from Vanguard America, and it said, "Defend America No More Tolerance, No More Diversity."

Wayne Graham, the owner of TC's Pawn and Loan in Murfreesboro, said he's not sure why he was targeted.

"I've never heard of them attacking a business like us before," Graham said. "I don't know why they chose us to vandalize, but like I said, we don't appreciate it."

Graham said it's going to cost more than $100 to fix the damaged vinyl.

"It was like they intentionally picked the most sticky sticker they could find," Graham said. "It wouldn't just peel off. It took hours of scraping to get it off the door."

After looking up Vanguard America, Graham said they're concerned.

"We just want everybody to be aware and know that it's here," Graham said.

Sasha Armstrong, an employee, said she's never experienced hate like this before.

"You see it on TV, and they did have a march here a few months ago, but something happened and they didn't show up," Armstrong said.

She's upset that a white supremacist group is probably behind this.

"It was a disgusting situation," Armstrong said.

According to multiple news outlets, members of Vanguard America were seen at the protests in Charlottesville, Virginia.

A part of the website said, "As White men and women, it is our duty to not only stand against the tempest, but to fight it tooth and nail."

As a small business owner, Graham has wanted to make sure his customers know that TC's Pawn and Loan welcomes all people.

"It's just not what we're about. It don't matter what color you are, what nationality, what race, everybody's welcome here at TC's Pawn," Graham said.

As of now, the business is not releasing surveillance video to the public yet. The incident was reportedly captured on their video surveillance system.

We reached out in an email to Vanguard America for the following statement:

"The postering of private businesses and property is strictly forbidden in my organization. This unfortunate happenstance was a mistake from a new member who had not been informed of this rule yet. This member has been reprimanded and will reimburse and formally apologize to the business."