5 Things To Know For Monday After Colts Loss 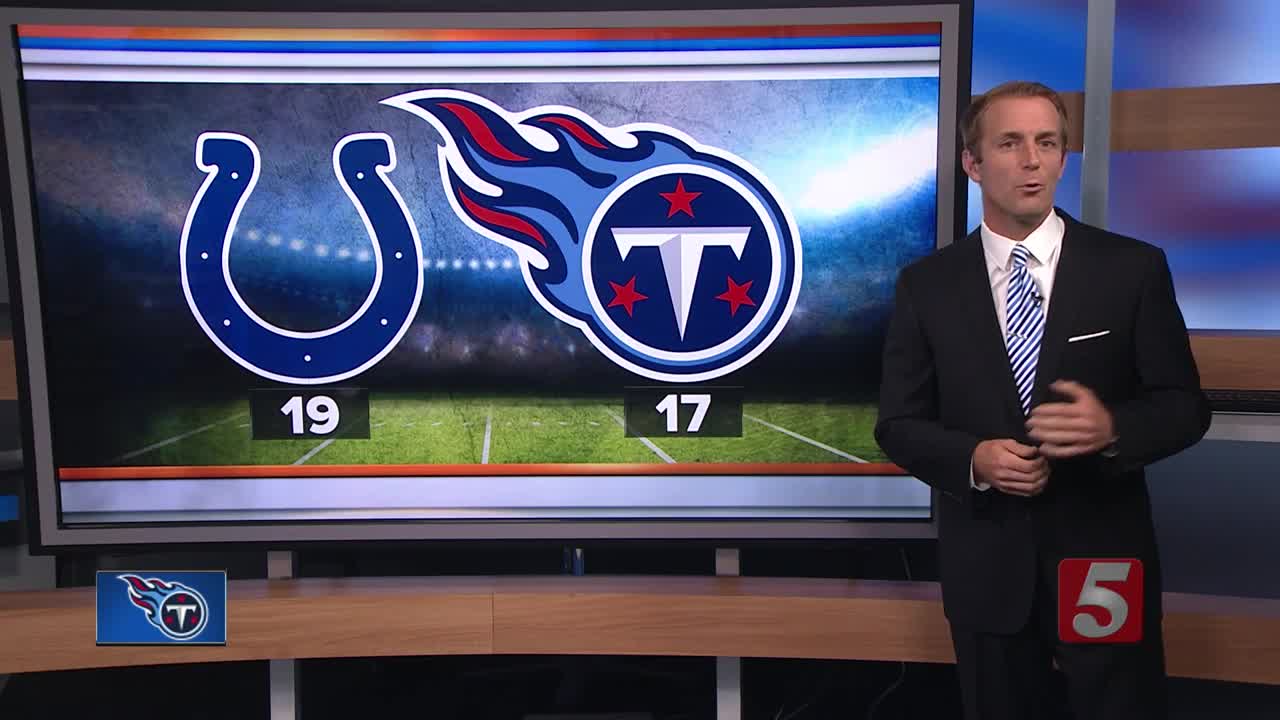 A week ago the Titans were the toast of the city, riding high off a 30 point win in Cleveland. Now the questions are about what went wrong in a 19-17 loss to the Colts Sunday that was their 18th defeat in the last 21 meetings in the series. 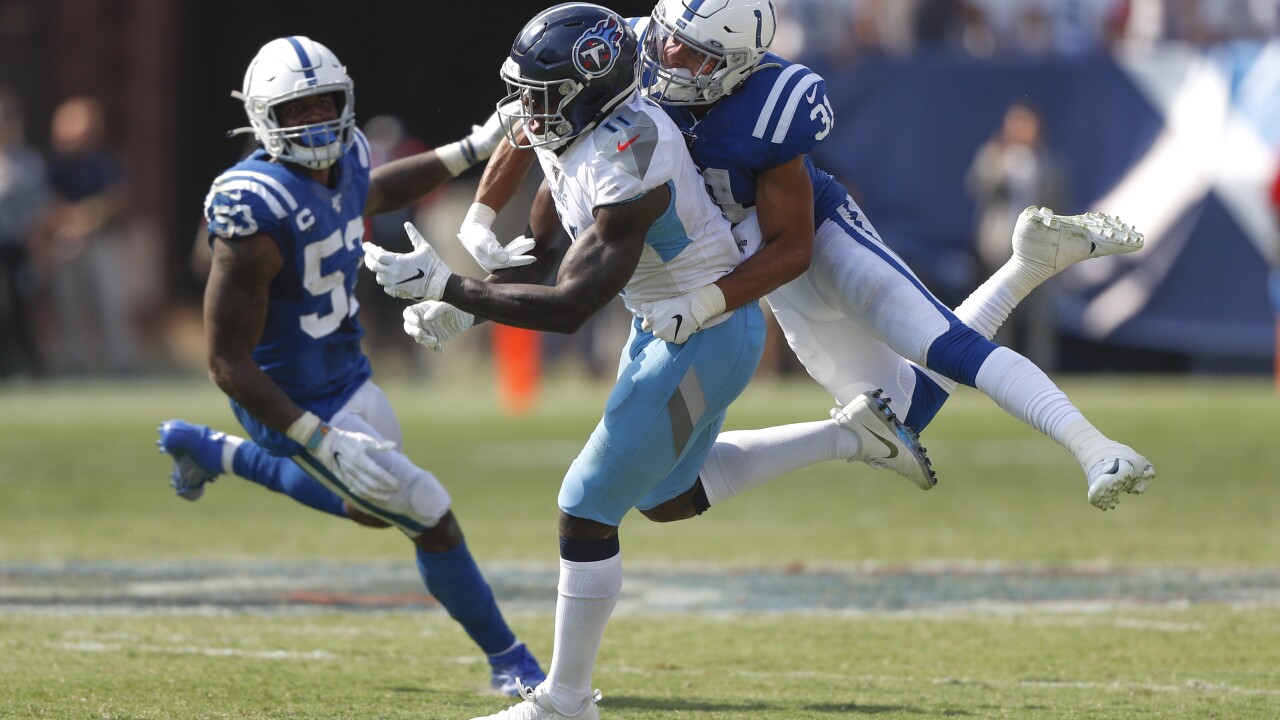 NASHVILLE, Tenn. (WTVF) — A week ago the Titans were the toast of the city, riding high off a 30 point win in Cleveland. Now the questions are about what went wrong in a 19-17 loss to the Colts Sunday that was their 18th defeat in the last 21 meetings in the series.

Here are our five things to know coming out of a game in which the Titans blew their opportunity to change the tide in the series against one of their biggest rivals, now without Andrew Luck at quarterback, and move into the early driver’s seat in the AFC South.

Mike Vrabel has largely been good in his 18 games as Titans head coach. The team is well prepared and the coaching staff has shown a knack for adjusting both in games and over the course of the season.

But Sunday was not good. The offensive gameplan was vanilla and, most notably, Vrabel made some late game decisions that will continue to be dissected for some time following the two point loss.

He head a pair of chances to challenge calls on the field, one for a pass interference on Malcolm Butler and another for the spot of a ball near a first down late on the Titans’ second to last possession. Vrabel said Monday that prior evidence has shown that neither of those calls are likely to be overturned without blatant evidence.

Even after electing not to challenge the aforementioned spot, Vrabel potentially cost his team with another decision. The second year coach elected to have the Titans take a delay of game penalty and punt the ball away after they briefly failed to draw the Colts offsides with a hard count. The move saved his three timeouts, but allowed a precious 40 seconds of game clock to tick off.

The Titans final drive was also plagued by poor game management. After a Marcus Mariota scramble got a first down near midfield, the Titans spiked the ball to stop the clock. The second down pass went to A.J. Brown short of the first down marker, then the Titans spiked the ball again leaving them with just one play to pick up a fourth down conversion and the clock dwindling to get into field goal range.

That pass was incomplete and the game was over. In that situation, you absolutely can not spike the ball twice in a set of four downs, giving up two chances or productive plays.

Over the course of his first four seasons in the NFL, Mariota has been plagued by inconsistent play. One game will be electric, but it’s often followed by a dud or, worse yet, an injury.

Mariota is now healthy and in his fifth year in the league. With his contract expiring at year’s end, now is the time he must prove that he can put that inconsistency behind him and be the guy to lead this team into the future.

He played pretty well in week one in Cleveland, throwing for three touchdowns, but faltered Sunday throwing for just 154 yards and one TD. He looked unsure with in the offense and was often late on throws. Worse yet, he held onto the football multiple times taking sacks. One of them early in the fourth quarter pushed a field goal attempt back to 45 yards and Cairo Santos missed wide left.

The poor game will only increase the chatter amongst his critics that believe he is not a franchise quarterback.

PUT AN APB OUT FOR HUMP

The Titans signed Adam Humphries to a four-year, $36 million dollar contract in the offseason to come in and be a major factor in their passing game.

A year ago in Tampa Bay he proved himself to be one of the most slippery slot receivers in the NFL with 76 catches. We saw him make plays, sliding free from coverage time and time again in training camp, and he was heavily featured on the Titans very first series of the preseason in Philadelphia.

There were reasons to believe he would be one of the stars of this offense. But two games into the regular season Humphries has been targeted just three times, catching all three for a total of four yards. His two catches against the Colts went for negative-one yard.

Humphries has to become a part of this offense soon.

One of the areas Humphries was supposed to have the biggest impact was on third downs, so his lack of targets may contribute to the woeful start the team has had on third down.

The Titans were just one of 10 on third downs Sunday vs. the Colts. Meanwhile, Indianapolis was 7-14, extending multiple drives with third and long conversions that helped them go down the field and score touchdowns.

Tennessee isn’t extending any drives. It’s now just three for 20 on third downs this season. That means the Titans are punting the ball away instead of handing it off to Derrick Henry to start a new set of downs or stretching the field to find Corey Davis or finding Humphries or Delanie Walker over the middle more times each game.

Part of the third down problem stems from inefficiencies from the offense on first and second downs leading to third and long situations. Thirteen of their 20 third down opportunities have been 10 yards or longer to reach the line to gain. That’s obviously low percentage.

The Titans have to be more efficient on first and second down to get themselves in more manageable third down situations. That will open up the playbook and hopefully increase the touches for the team’s playmakers.

As disappointing as Sunday’s loss was the Titans have to forget about it and move on quickly.

The team held meetings and a walk through Monday and will hold their only practice of the week Tuesday at St. Thomas Sports Park. They will then leave Wednesday for Jacksonville ahead of Thursday night’s kickoff against the Jaguars.

It’s the shortest turnaround of the season made even tougher by the fact that Sunday’s game was played in the hottest conditions ever at Nissan Stadium. Don’t expect Jacksonville to be much cooler, even at night.

It’s a critical game with the Titans wanting to avoid a second loss in four days and, more importantly, an 0-2 start against divisional foes.