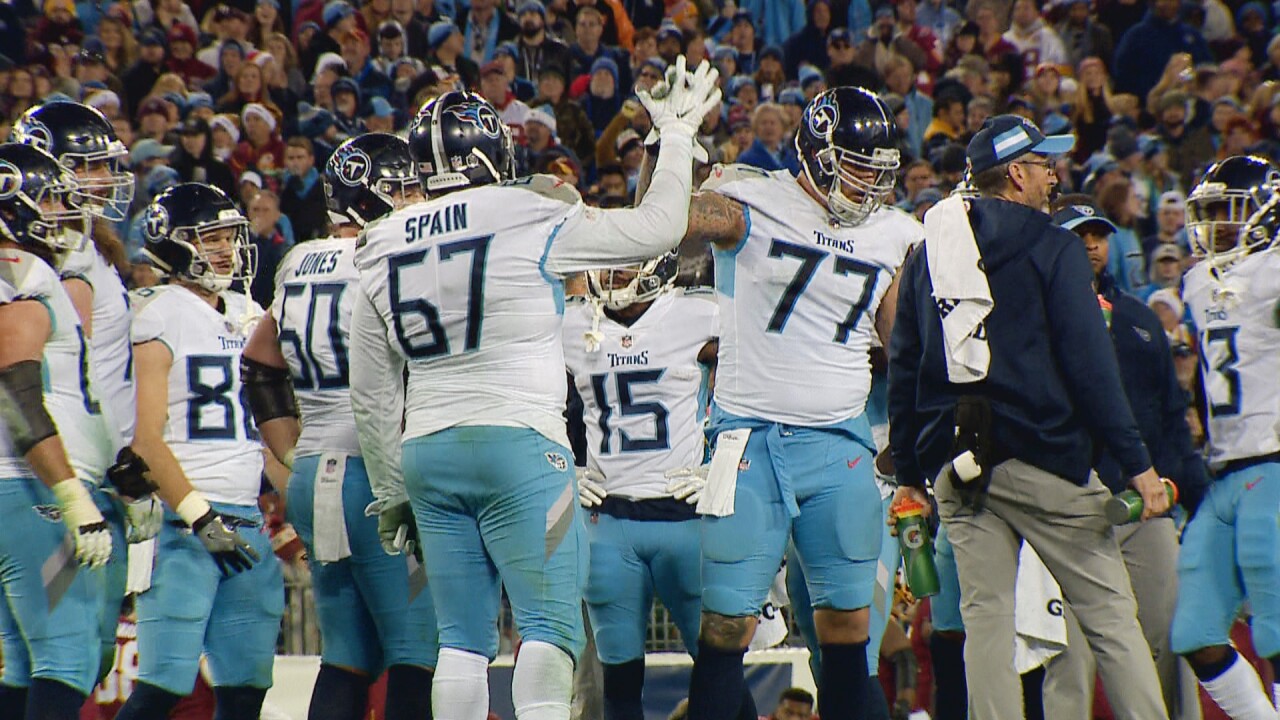 NASHVILLE, Tenn. (WTVF) — Marcus Mariota kneeled around the 20-yard line as trainers rushed to his aid late in the first half Saturday at Nissan Stadium. As they worked on his shoulder the quarterback grimaced, then quickly got up and headed to the locker room, his afternoon done thanks to a stinger.

It was a sight that has typically meant doom for the Titans. Never before had they won when Mariota had been knocked from a game. But this time was different, as Tennessee rallied back with 16 fourth quarter points to beat Washington 25-16 and keep their playoff hopes alive.

The win sets up a week 17 showdown with the Colts in which the Titans can try to win their 10th game for the first time since 2008, and possibly clinch a playoff berth for the second straight year.

The win happened because a Titans team that has followed a script of running the football and stingy defense in December, stayed patient when things were slow to get started, didn’t panic as bodies dropped and got key contributions from some unlikely spots.

Ryan Succop missed an extra point and Pro Bowl defensive tackle Jurrell Casey joined Mariota on the sidelines with an injury in the second half. And the Redskins controlled the clock, riding Adrian Peterson for 119 rushing yards as they built a 16-12 fourth quarter lead.

But Blaine Gabbert, who struggled to get the Titans offense going after Mariota exited in Miami and Indianapolis earlier in the year, came in off the bench and played well. He completed 7-of-11 passes, including a big 35-yard strike to Taywan Taylor midway through the fourth quarter when time and opportunity was dwindling away.

That’s when Derrick Henry, the Titans’ MVP during a four-game December winning streak, put them on his back again. The bruising back picked up 33 of his 84 rushing yards on four carries on the drive, dragging defenders for 18 yards down to the two on the final one.

That set the stage for maybe the season’s biggest surprise. On first and goal, with the Redskins selling out to stop Henry, Gabbert rolled out and hit a wide open MyCole Pruitt for the go-ahead touchdown with 4:30 left to play.
It was Pruitt’s first career touchdown catch. A special moment for a guy who started the season in Houston and was only brought to Tennessee following the season-ending injury to Delanie Walker, and then inserted into a regular role after Jonnu Smith suffered a knee injury.

It’s been the “next man up” mantra for the Titans all year, and it’s why this team believed it could win even as the chips stacked against them Saturday.

It’s why a defense that was gashed by Peterson all day still believed it could make a play to win the game minus Casey and minus top cornerback Logan Ryan after his season-ending injury last week.
It made two.

The first came when Malcolm Butler perfectly timed a cornerback blitz with the Redskins driving for an answer following the Pruitt touchdown. Butler leaped in Washington quarterback Josh Johnson’s face, forcing him to throw high and airmail a pass right into the waiting arms of Kevin Byard, all but sealing a Titans’ win.

The Redskins did have one last desperation play from their own 15-yard line, but Butler intercepted that pass and ran it back 56 yards for a touchdown, cueing a celebration from a home crowd that will now get the chance to cheer this team on in arguably the biggest game in Nissan Stadium in a decade next week.

They still need a little help, but with either a Baltimore or Pittsburgh loss the Titans will be playing for a playoff berth against the rival Colts.

It’s a scenario that seemed unlikely four weeks ago when they were 5-6 following back to back losses in Indianapolis and Houston, or even in the first half Saturday when Mariota went down.

The Titans were eliminated from playoff contention when Mariota broke his leg at Jacksonville in week 16 of 2016. They lost when he exited in Houston last year with a hamstring strain and suffered the defeats to the Dolphins and Colts with no. 8 unable to finish earlier this year.

But this is a Titans team that continues to believe. Through all the injuries and adversity, they’re confident they can continue to find a way.

Survive and advance. And they have.

And now if they can do it one more time they almost certainly will be dancing into the playoffs once again.