Newschannel 5’s exclusive coverage of the Titans’ first ever international game begins with coverage from London on Thursday and continues daily through Sunday. Make sure to check out our Titans Tackle London special pregame coverage at 7:30 a.m.

Sunday before the CBS network pregame, and then watch Sunday Sports Central following the 10 o’clock news Sunday night for extensive postgame coverage from the only station that travels with the Titans everywhere they go.

Throughout their stay in London, Newschannel 5 Sports’ Steve Layman will update this running blog of the sights and activities around the Titans visit in one of the world’s most historic cities.

1:30pm CST: Sitting at gate C2 at Nashville International airport along with sports executive producer Brian McKeegan, about to board a flight for Chicago before the long haul across the pond to London.

I love my job every day. Following a boyhood dream and getting to share my passion for that with our NC5 viewers is an every day thrill and such an honor. But the idea we’re headed to Europe to cover a football game that will put Nashville’s team and the city itself on the global stage is almost too good to be true.

5:02 p.m. CST: About to take off in Chicago for the nearly eight hour flight to London, but getting one last taste of home courtesy of Maneet Chauhan. 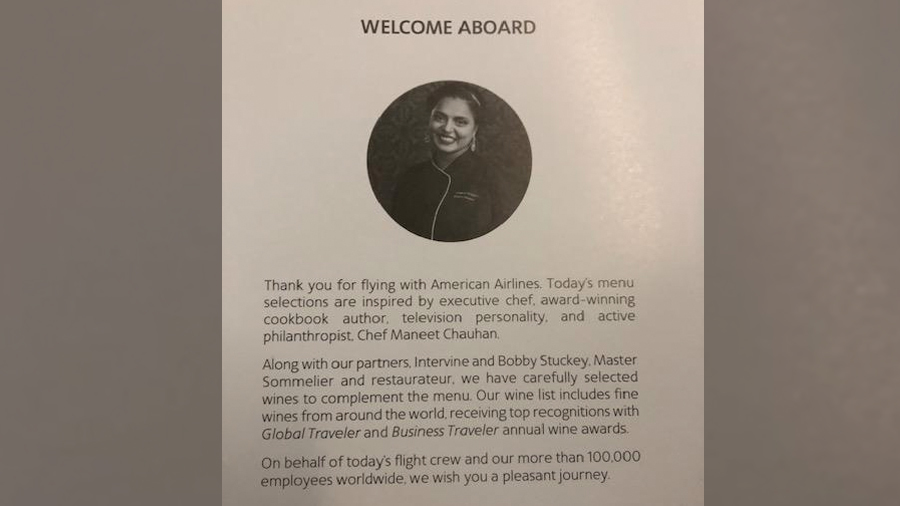 How cool is this? One of Nashville’s top chefs is the talent behind the menu on this American Airlines flight. The menu looks fantastic, but I’m going with the short rib option. Yum!

If you haven’t experienced Maneet’s cooking, I urge you to recommend to support a local Nashville chef and try Chauhan Masala and Ale, Mockingbird or, my personal favorite, Tansuo.

6:53 a.m. GBT: Welcome to London! Our short trip across the pond took just over seven hours, but considering it was supposed to be closer to eight no one’s complaining!

We landed at Heathrow about 30 minutes ahead of schedule and made it through a friendly customs line quickly. Now it’s off to find our luggage and a taxi and get this day started.

I managed about three hours of sleep on the flight, but I don’t think Brian slept a wink. Here’s to hoping adrenaline gets us through today. Otherwise, a coffee shop is in our future. And anyone who knows me knows I hate coffee!

1:25 p.m. GBT: Stopped at the Marble Arch to shoot standups for my first story in London. It’s a beautiful sunny day with temperatures in the low 60s. What a great forecast it appears to be for the weekend. 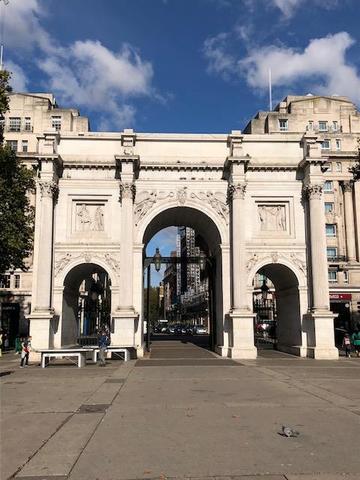 Then it was off to Piccadilly Circus to talk with local Londoners to see what they know about the NFL, the Titans and even Nashville. Here’s a hint: after music, it’s not much. Maybe that will change after Sunday. 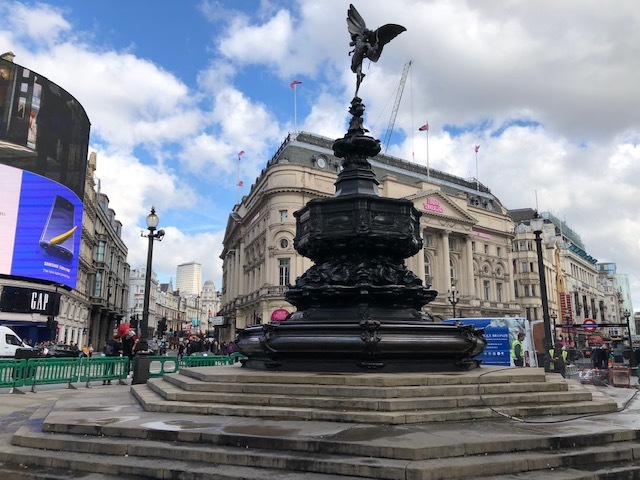 We did come across a pair of couples, Mark and Kat Davis and Robert and Joella Boyd, both from Nashville, that said they jumped at the opportunity to come the moment the schedule was announced last spring. Looks like their trips are off to great starts and they remain optimistic about the Titans’ chances. You can see their interviews coming up on Newschannel 5 at 6 p.m.

2:22 p.m. GBT: We just got done speaking with Mark Waller, the Executive Vice President of International for the NFL. He’s in  charge of the London games and is very bullish about the future of the game here. 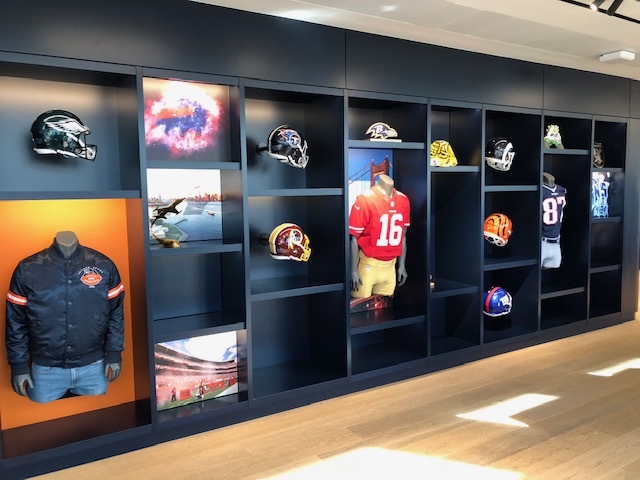 See the juiciest parts of our conversation with him tonight at 6 and 10 p.m., but let’s just say he thinks international expansion, and not just in London, is coming to the NFL at some point.

9:31 p.m GBT: Brian is putting the finishing touches on the sixth and final story of our day. It’s been a pretty exhausting run of 35 hours or so with one short nap on a plane. Kudos to Brian. I’m exhausted, but I’m not lugging the heaviest gear or shouldering a camera all day. He was the MVP today for sure. 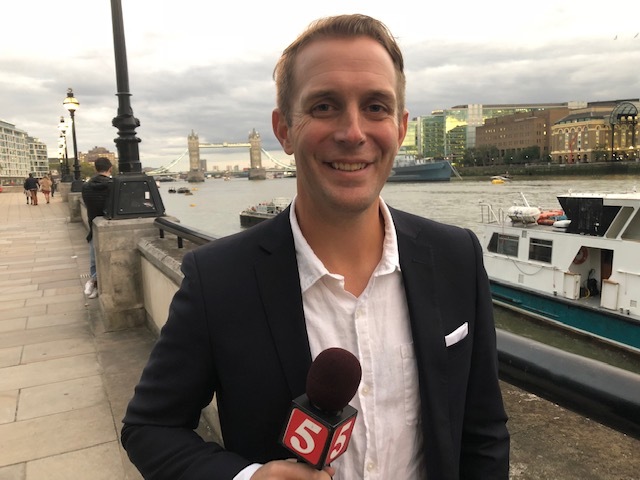 I’m fading fast, so here’s to a great night’s sleep before another big day tomorrow. Cheers!

4:13 p.m. GBT: Well, this was unlike any practice I’ve ever seen. Ever seen a football practice at a castle before?

The #Titans are practicing next to something that seriously looks like a castle. @NC5pic.twitter.com/PrQmHkTSYT

The Titans arrived in London just after six this morning, then bused to their hotel at Syon Park. From there, it was a short walk out onto the practice field, a converted patch of grass just outside the home of the Duke of Northumberland.

The scene was incredible. A NFL team practicing on a patch of grass that was only about 50 yards long in the shadow of a 400 year old castle.

And the Titans insist they got good work in as they tried to avoid twisting an ankle in the divots. Impressive for a bunch of guys who didn’t get much sleep last night. They’re tougher than I am.

Check out the Augustus statue peering over Logan Ryan during the media session. 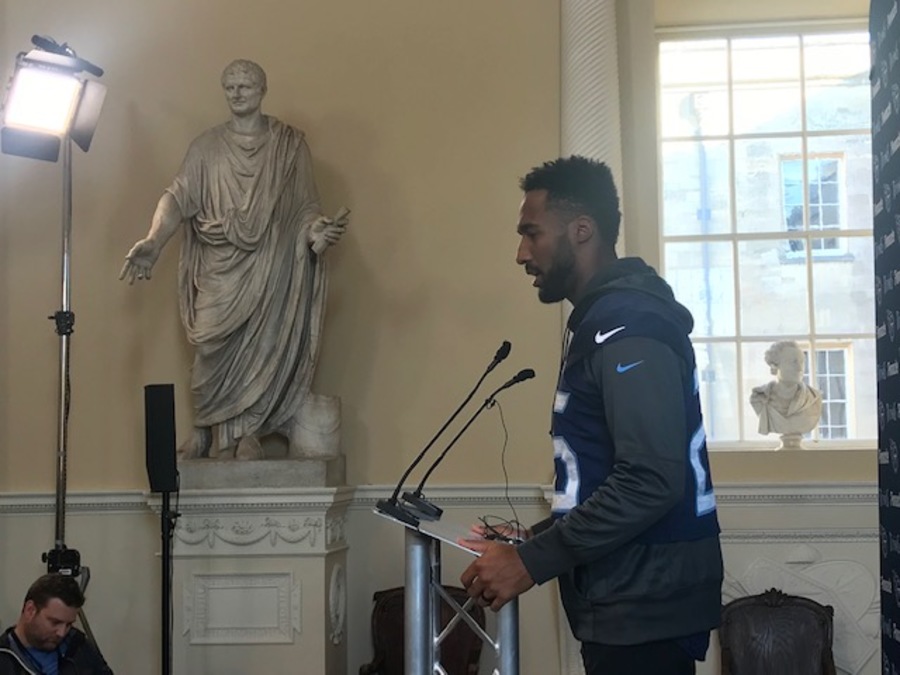 I also got a chance to catch up with Titans controlling owner Amy Adams Strunk. Here from here tonight at six, and make sure to tune in to our Titans Tackle London special coverage Sunday morning at 7:30 for our exclusive interview with her on the Titans appearance in London, the NFL Draft and her vision for the franchise.

Lastly, a shoutout to the other Nashville media friends that sent people to cover this historic game.

8:14 p.m. GBT: The Titans and Chargers aren’t the only teams playing American football in London this weekend. We just stopped in on a workout of the London Blitz under-19 team.

The Blitz may just be the most successful program in the British American Football Association. Coach Adrian Klemins became the youngest coach in the U.K. when he took the Blitz over at age 22.

But now Klemins is focused on developing the Blitz’s youth program, coaching their Under-19 team to six titles in the last eight years, and building a recruiting pipeline to some of the U.K.’s top athletic talent. The Blitz have produced three players that have been in NFL camps, and several more that have played college football in the U.S.

From the looks of things there will be more on the way.

2:49 p.m. GBT: Wow. What a game. As a longtime Chelsea F.C. fan, I was chomping at the bit to fit in a trip to Stamford Bridge. Throw in the fact they were playing Manchester United and it became a bucket list sporting event.

The tickets were a bit pricey, but my friend Travis Haney (who cover the Titans for The Athletic) and I went all in for the experience. And man, did it love up to the hype.

The Bridge’s neighborhood setting reminds me a bit of Wrigleyville around Wrigley Field in Chicago, the fans on both sides were terrific and our seats were outstanding.

And the game was fantastic. Chelsea scored early, Man U roared back to take the lead and looked to have the game won in stoppage time, but the Blues equalized it on Ross Barkley’s rebound goal in the 96th minute. Amazing.

It was dramatic, it was loud and, considering it came against their old manager Jose Mourinho, it almost felt like Chelsea won despite the 2-2 score.

Anyway, if you love soccer, you need to check out a Premier League game some time. They’re pretty special.

7:08 p.m. GBT: Shot our standups today just outside of Buckingham Palace. What a cool backdrop. It’s almost hard to capture on camera.

I think we have some cool stories to share, as well. More of my exclusive interview with Titans Controlling Owner Amy Adams Strunk will come up at six following Alabama and Tennessee. Then at at 10 we’ll have my earlier mentioned story on the London Blitz.
And, of course, we’ll have the day’s news from the Titans as they look forward to the one of a kind atmosphere Sunday at Wembley Stadium, but mostly to beating the Chargers and getting back on track.

We’ll be up bright and early with you at 7:30 central time tomorrow for our Newschannel 5 This Morning special presentation of the Titans Tackle London, leading up to CBS network pregame at 8 a.m. We hope to see you then!

Monday 12:28 a.m. GBT: Wow, what a day. Brian and I left the hotel this morning at 9:30 to head to Wembley Stadium and are just now rapping up our final story for Sunday Sports Central. I think that’s an honest day’s work.

Hope you enjoyed our Titans Tackle London pregame special this morning. We did our best to encapsulate their 72 hour trip to England and what the NFL’s presence over here means.

And how about that game? After Saturday’s Chelsea/Man U game and then today’s thriller I’m convinced that every sporting event in London is incredible. As a bonus, I’m headed to tour the All-England Lawn and Tennis Club Monday. Pretty good few days of sports venues.

It was a heartbreaking loss for the Titans, and I vehemently disagree with the decision to go for two, but Mike Vrabel has coached this whole season with an aggressive edge. You live by the sword, you die by the sword I guess. But now the Titans face a long flight home and have to regroup before the season’s second half.

Wembley Stadium was spectacular and the atmosphere had a significant buzz to it, from hours before the game right up until the final play. It’s clear there’s a passion for this kind of football here. Also, I got goosebumps for the national anthem on foreign soil followed by “God Save the Queen.”

The hospitality here was amazing, just too bad the Titans couldn’t have capped it off with a win.

We hope you’ll join us to wrap up our weekend long trip to London tonight on the Electric Power Companies Sunday Sports Central after the news at 10. We’ll have complete reaction from Vrabel and the players on his controversial decision to go for two, analysis with my guy Jonathan Hutton, the team’s reaction to their London excursion, a one-on-one interview with Tajae Sharpe following maybe the best game of his career, and a look at what “The Freak” - Jevon Kearse - is up to these days.

Hope to see you then and thanks so much for following along all week. We have a real passion for our sports, telling you stories and taking you along for the ride to some amazing stadiums and locations. This one may have topped them all. I really hope that came through.

Four and a half days, 15 packages, four interviews, four sportscasts, a pregame special and our extra postgame coverage later and our work here is done. Look forward to seeing you all back in Nashville.

But first I’m going to take a few days to myself to be an actual tourist over here. If you want to see more of London and Paris, make sure to give me a follow on Twitter and Instagram at @SteveLayman.