Butch Jones Is Out, What's Next For Tennessee? 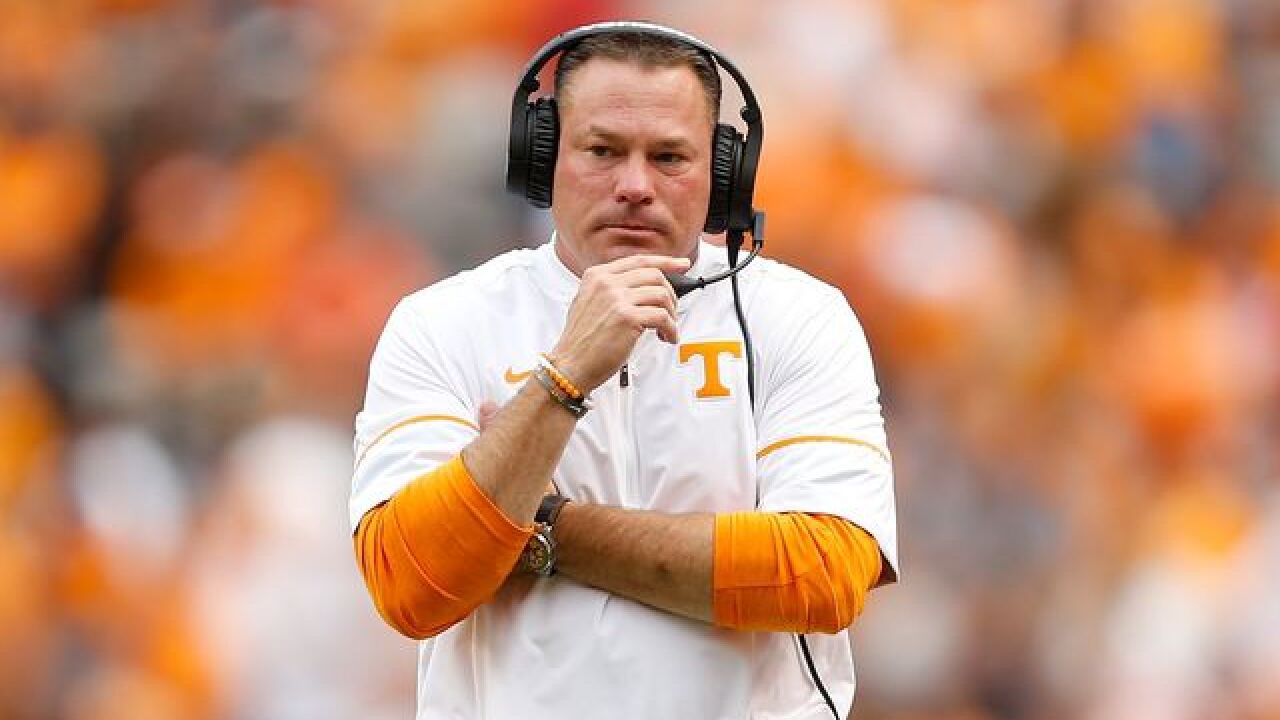 Copyright 2017 Scripps Media, Inc. All rights reserved. This material may not be published, broadcast, rewritten, or redistributed.
&lt;p&gt;Butch Jones on the sideline during a Tennesee game. Jones was fired Sunday with the Vols struggling to a 4-6 start to the season.&lt;/p&gt;

Now that Tennessee Athletics Director John Currie finally gave Vols fans their wish and showed Butch Jones the door, the question immediately goes to who will be the next coach headed to Rocky Top?

Jones should be credited for proving that it's possible to keep great players in the state to go to Tennessee and to recruit four and five-star athletes from elsewhere to head to Knoxville. While he ultimately proved to be a failure as a coach, Jones restored the bedrock of the program's foundation by bringing the talent back to Neyland Stadium.

He leaves Tennessee in a much better place than how he found it and that should make the job more attractive to candidates now than it was five years ago when Mike Hamilton plucked Jones from Cincinnati. The fact that the school has removed itself from it's financial difficulties of the past certainly won't hurt John Currie find his man, either.

The following candidates are on my radar, and should be on Curry's as well.

Let's start right at the top because there have been rumors about the Monday Night Football analyst and former Tennessee grad assistant for years now and Vol fans are hoping this could be the year that marriage finally comes together. So why not call him? It's hard for me to imagine that a Super Bowl coach who makes a reported $13 million a year between ESPN, EA Sports and his coaching camps would want to take a stressful collegiate coaching job, but if you're Currie and you can get a hold of him you have to make him say no.

Despite being a disaster in the NFL, Kelly remains one of the brightest offensive minds in the country. If he's willing to come back to the college game he could do a lot worse than landing at Tennessee, where he can stockpile top recruits for that light speed offense of his similar to the way he did at Oregon. It's been said that if Kelly returns to college it would be at a west coast landing spot, but if none of those openings are attractive enough perhaps Tennessee would be. I think Kelly would win big with his style on Rocky Top.

First off, anybody who can take Mississippi State to number one in the country is a whale of a coach. Mullen has proven himself to be a strong recruiter and developer of talent (an area Jones seemed to lack), and a strong game coach. He's gone a remarkable 68-45 in nine seasons with the Bulldogs and has gotten the school to pour resources into the program and upgrade facilities. But Mississippi State remains probably the hardest job in the SEC and Mullen is six games below .500 in conference play. Is it finally the time for him to make a move?

What Frost has done in Orlando is nothing short of astonishing, having taken over a program that went 0-12 in 2015 and leading the Golden Knights to a bowl game last season and a 9-0 start and top 20 ranking this year. Frost has an innovative offense and seems to know how to recruit, but is rumored to be the top choice at Nebraska and on the radar at Florida as well.

Campbell should be the slam dunk pick for Big 12 Coach of the Year having beaten the league's top two teams, Oklahoma and TCU, during a 6-4 start. He's engineered a remarkable turnaround in just two years in what is normally a football wasteland in Ames and won nine games in three of his four seasons at Toledo before that. He'd be a good choice, but the price tag would be hefty as Campbell reportedly has a buyout in excess of $8 Million.

His star isn't quite as bright after the Boilermakers' struggles in the second half of the season, but people around football believe Brohm has one of the brightest offensive minds in the game. His teams at Western Kentucky put up record numbers and he's at least made perennial doormat Purdue competitive in just his first season at West Lafayette.

Morris has elevated the Mustangs from Conference USA bottom feeder to bowl eligible in his third season. Before that, he helped Dabo Swinney put Clemson on the map as his offensive coordinator. A Texas native, Morris is right at home in the Metroplex, but probably would be intrigued by the opportunity to come back east for a job like Tennessee.

The polar opposite of Jones, Schiano would be a no nonsense head coach that would straighten out some of the "distractions" within the Tennessee program right away. He did an incredible job of building Rutgers (Rutgers!) into a Big East contender from 2001-11, but was a disaster in the NFL with the Bucs. He's spent the past couple years working under Urban Meyer at Ohio State while waiting for his next opportunity. He's turned down other jobs to wait for the right one this time around. Is Tennessee the right one?

Norvell has built on the foundation Justin Fuente laid at Memphis, going 16-5 over two seasons to put himself on the radar. The Arkansas native knows the state and the region well. He may not be ready for the microscope of the Tennessee job, but the Vols could do a lot worse.

The 50-year-old Cowboys coach was interested in the job five years ago before Jones accepted it, would he be again? Sources tell me Gundy's relationship with mega booster T. Boone Pickens has gotten better and it's hard to imagine anybody else in Stillwater having enough sway to make him want to leave his alma mater after what he's built with the Cowboys, but it wouldn't hurt to call.

Similar to Gundy, Patterson was on the radar the last time Tennessee went shopping for a head coach. He's a defensive minded coach in a league where defense is next to impossible, but seems more entrenched at TCU now that the Horned Frogs have moved into the Big 12. But if there's any chance Patterson might be interested, he's a program builder that the Vols should look at.