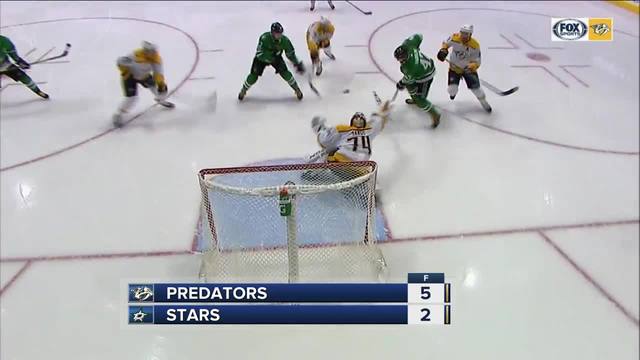 When the Predators signed Ryan Johansen to an eight-year, $64 million contract over the summer it was a benchmark moment for a franchise that has long been in search of a bonafide top line center.

When the Predators signed Ryan Johansen to an eight-year, $64 million contract over the summer it was a benchmark moment for a franchise that has long been in search of a bonafide top line center.

That's why, with that in mind, it was of some concern when Johansen left Saturday night's win over the Ducks with an undisclosed upper body injury.

But what we've seen in wins over the Bruins and Stars the past two nights is a Nashville team that is built with enough skill and depth to absorb short term losses to even one of it's biggest stars.

No place is that depth more evident than in the center of the ice where Johansen's absence forced recently acquired Kyle Turris to the top line flanked by his productive linemates Craig Smith and Kevin Fiala. Calle Jarnkrok moved up to the second line center slot followed by veteran Nick Bonino and youngster Frederick Gaudreau.

If the "Jofa" line with a healthy Johansen, Filip Forsberg and Viktor Arvidsson leads every opponent's scouting report, the Turris line is quickly establishing itself as a line they will have to reckon with as well. In Monday's 5-3 victory over the Bruins Turris, Smith and Fiala swept all three Stars of the Game positions, combining for three goals and four assists.

The trio has combined for 35 points since Turris was acquired last month. Perhaps no one has benefited more than Smith, who now has 11 goals this season after scoring two in the first period against Boston, one goal sky of his total from all of last season when he never seemed to get going. Fiala also seems to be finding his groove after a slow start coming off a broken leg suffered during last year's playoff run, scoring a goal in both games this week. He's scored four of his five goals and has six assists since Turris was acquired.

Turris himself has found a quick home in Nashville on a Stanley Cup contender. He's scored in seven of his 12 games with the Predators, dishing out eight assists while showing a unique playmaking ability. He also provides the Preds with another formidable guy in the faceoff circle along with Johansen. But it's not just Turris's addition that makes the Preds now arguably the deepest team in the center of the ice in the NHL.

Jarnkrok scored a goal and an assist in in Tuesday's 5-2 win over the Stars, and continues to be one of the best two-way forwards in the league. The veteran Bonino, a two-time Stanley Cup champion with the Penguins, battled through injuries early in the season, but has found his role as a gritty third line center. And Gaudreau, who actually led the beat up Predators with three goals in the Stanley Cup Final against Pittsburgh last summer, provides a young, but talented fourth line option when Johansen is out.

And that doesn't even count a guy like Colton Sissons, the team's top line center in the Stanley Cup Final who recently slid over to wing, or Austin Watson, a physical former center that can play any number of roles for Peter Laviolette's team.

With the win in Dallas the Predators move into first place in the Central Division and currently hold the no. 1 overall seed in the Western Conference. And it was done the last two nights without Johansen, much like it's been done all season without star defenseman Ryan Ellis, who hopes to return around Christmas after offseason knee surgery. The Preds have also been without the services of one of the key cogs to their Power Play, Scott Hartnell, in a recent stretch that has seen them run off 13 wins in their last 16 games to rocket up the standings.

The Predators are already playing as well as anybody in hockey and there's still another level they can reach. And that should be scary for the rest of the NHL.