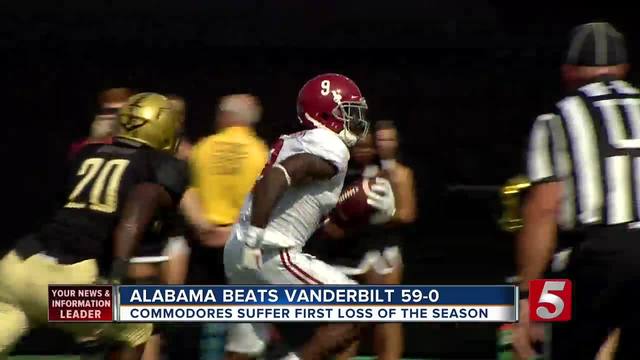 Be careful what you wish for. Vanderbilt said it wanted Alabama and it got a big dose of it Saturday afternoon in a 59-0 smackdown at Vanderbilt Stadium. 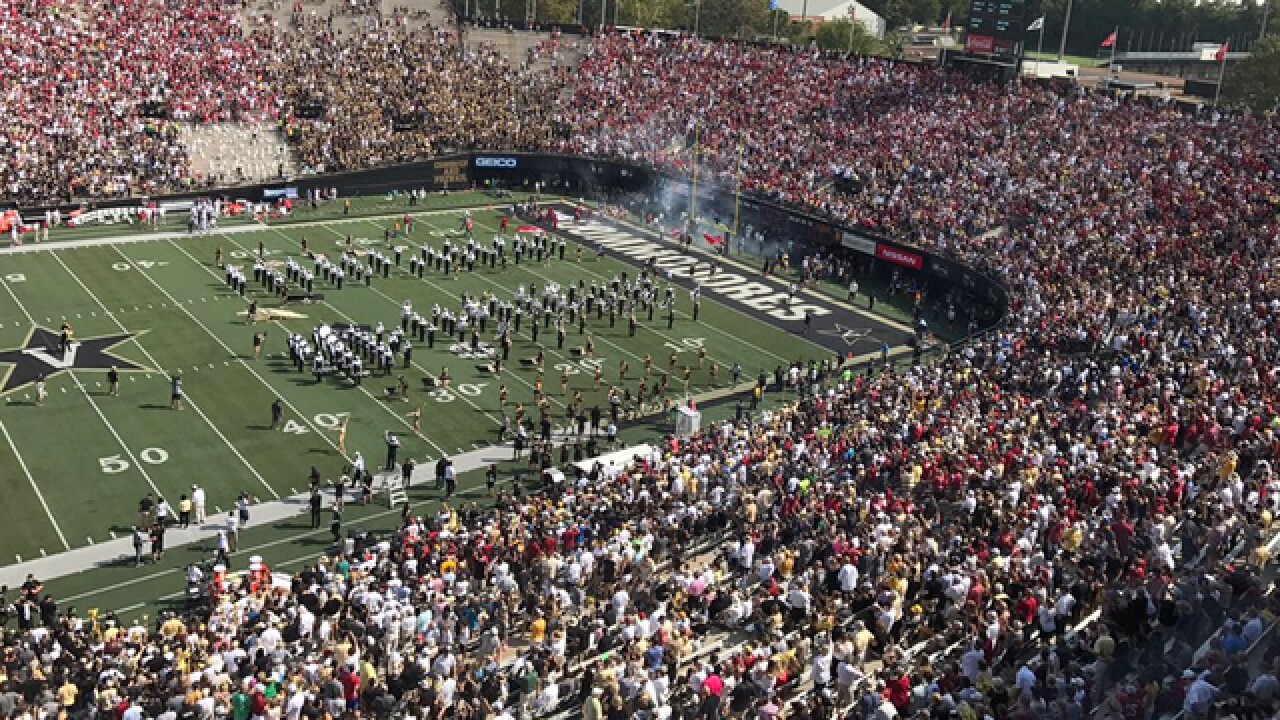 Be careful what you wish for. Vanderbilt said it wanted Alabama and it got a big dose of it Saturday afternoon in a 59-0 smackdown at Vanderbilt Stadium.

The Commodores had started the season 3-0, allowing a SEC-low 13 points through three games. After beating no. 18 Kansas State last week, defensive lineman Nifae Lealao declared, "You're next, Alabama."

What was next was a beatdown not seen before in the Derek Mason era at Vandy.

"I think they outcoached me and they outclassed us," the fourth-year Vanderbilt head coach said after the game.

The top-ranked Crimson Tide flooded Commodore Country with a fanbase that made up more than half of the sellout crowd and with a football team that flexed it's muscles outgaining Vandy by nearly 600 yards.

"Credit Alabama, I think Alabama is exactly who everybody thinks they are," Mason said. "Extremely good football team, well coached, physical, don't beat themselves. I thought for us, we dug a hole early and it snowballed on us. I didn't think we did a good job responding.

The numbers are eye popping. Alabama ran 93 plays for a whopping 677 yards while possessing the ball for 42:55. Five different players, including starting quarterback Jalen Hurts rushed for more yards than Vandy did.

And a Vanderbilt offense that has shown so much promise over the first few weeks of the season needed to be checked for a pulse by the second half. Kyle Shurmur went just 4-15 with an interception before being knocked out of the game in the third quarter while star running back Ralph Webb rushed for just 20 yards on only six carries.

Perhaps the most telling stat on a lobsided afternoon is the fact that Alabama registered a school-record 38 first downs in the game. Vanderbilt ran 38 offensive plays TOTAL.

"We practiced for it, we planned for it, but at the same time they had a better ball team than we had today," Vanderbilt linebacker Emmanuel Smith said. "And they came out and it showed on the field of play."

This was no contest.

And while Alabama winning in Nashville is not a shock to anyone, the Crimson Tide after all was a 19-point favorite, this is a frustrating reality check to Vandy faithful.

But maybe that is the greatest testament to how far this Vanderbilt program has come in Mason's four seasons. This program lost his opening game on this same field by 30 to Temple. The Commodores managed just seven wins over his first two seasons.

After an Independence Bowl trip a year ago and a 3-0 start to this campaign, there is a newfound belief on West End that the Commodores can compete in the SEC. And Saturday was a chance against the nation's premier program on your home field with a national audience watching on the CBS game of the week.

That's what made this so disheartening.

"Obviously, you always want to come out and execute to the best of your ability," wide receiver Trent Sherfield said. "Once things had started to go downhill, just the snowball effect, it got really frustrating."

Now the challenge is for the Commodores to tune out the naysayers who will inevitably tout this team as the "same ole Vandy" following this performance. This isn't the same ole Vandy, and they aren't 59-0 worse than Alabama.

This was a disaster, yes, but it only counts as one loss. This program has come along ways in a short time, and it's up to the veteran leaders to make sure they get this train back on the tracks quickly. Next week's trip to The Swamp to face Florida is critical to Vandy's SEC East hopes, which are still legitimate despite Saturday's result.

Many teams have been embarrassed by Alabama before. Vanderbilt's 2017 season will be judged not by what happened on the big stage Saturday, but by how it responds for the rest of the season.