No. 8 Notre Dame Holds On For 22-17 Victory Over Vanderbilt 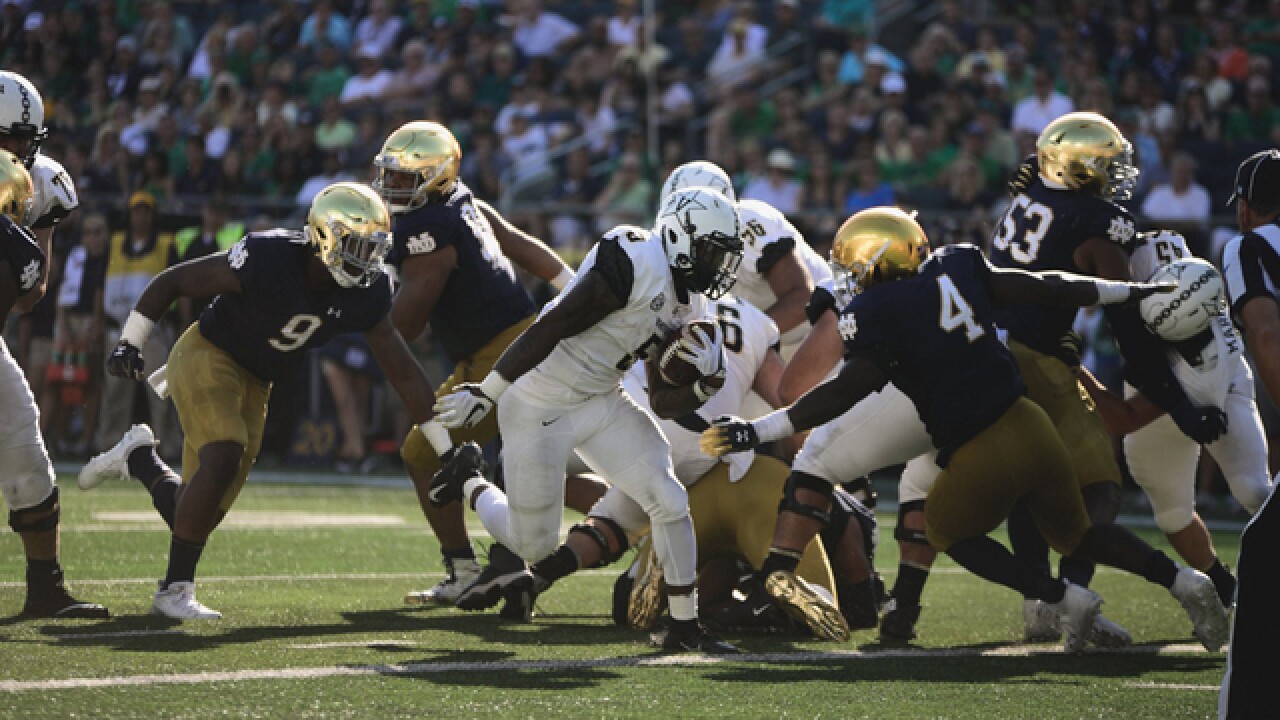 Jalen Elliott knocked the ball loose from Vanderbilt receiver Kalija Lipscomb with 1:07 remaining to give Notre Dame a fourth-down stop and No. 8 Notre Dame held on for a 22-17 victory over the Commodores on Saturday.

Kyle Shurmur threw for 326 yards and one touchdown for Vanderbilt (2-1), rallying his team back from a 16-3 halftime deficit. His fourth-and-4 pass from the Notre Dame 31 to Lipscomb, who caught a game-high 11 passes, was nicely thrown and the receiver almost made a reaching catch at the 11. But the safety Elliott, with some help from the ground, knocked the ball loose and incomplete.

Wimbush, who had 297 passing yards but three interceptions in the 24-16 victory against Ball State, threw for 122 yards and added 84 yards on the ground, including a 13-yard scramble for a touchdown as Notre Dame took an early 10-0 lead late in the first quarter. But despite a 2-yard TD pass from backup quarterback Ian Book to tight end Nic Weishar early in the fourth quarter for a 22-10 lead, the Irish struggled over the last three quarters and had to hold on.

Vanderbilt finished with 420 yards to 380 for the Irish, who did not turn the ball over but got three from the Commodores.

Vanderbilt: The Commodores couldn't get anything on the ground early against the defense coordinated by Clark Lea, a former Vanderbilt fullback. They rushed for minus 1 yard on their first eight carries before Ke'Shawn Vaughn ripped off an 18-yard run with 7:33 left before half and finished with 27 yards on 11 carries in the first half that Notre Dame led 16-3. They finished with 94 rushing yards on 27 carries

Notre Dame: After a strong start with 161 total yards while taking a 10-0 lead in the first quarter, the Irish struggled over the next two, totaling 111 with just 25 yards in the third quarter as Vanderbilt closed the deficit to 16-10. Two of three first-half drives of 10 plays by Notre Dame ended in field goals by Yoon, though the kicker missed a short kick late that would have put the Irish up by eight.

Notre Dame: The Irish play their first road game of the season Saturday at Wake Forest.