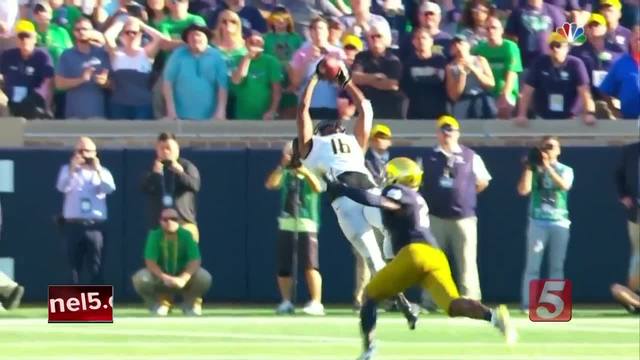 So close, yet not quite good enough. That was the story Saturday as Vanderbilt furiously fought back from a 16-0 deficit only to fall short against no. 8 Notre Dame 22-17. 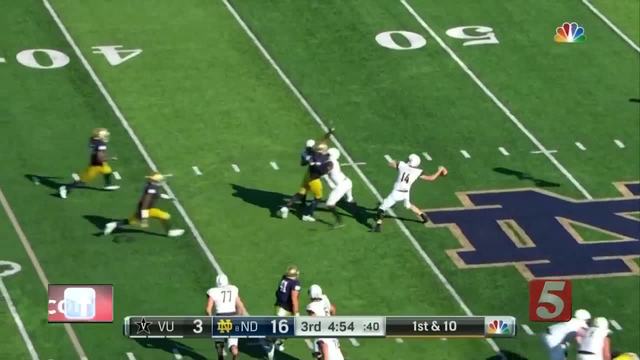 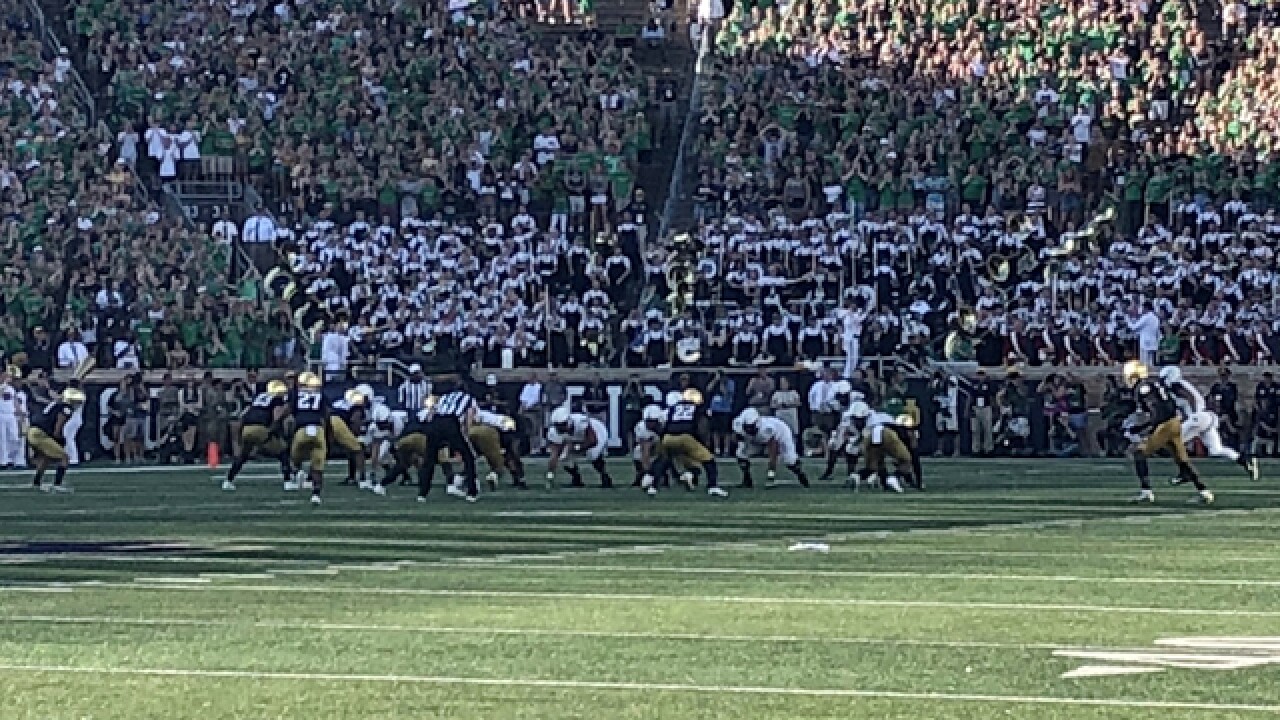 So close, yet not quite good enough. That was the story Saturday as Vanderbilt furiously fought back from a 16-0 deficit only to fall short against no. 8 Notre Dame 22-17.

Kalija Lipscomb couldn’t quite hang on to a fourth down pass near the Notre Dame 10-yard line with just over a minute to go as the Fighting Irish avoided what would’ve been a stunning home loss.

The Commodores survived one fourth down on the drive thanks to a pass interference penalty. But Lipscomb, who caught 11 passes, more than double any one else on the field Saturday, couldn’t make what would’ve been a spectacular leaping catch with a defender draped all over him.

“They bit on the under route, so I threw it high to him and he had to go up and get it,” Vanderbilt quarterback Kyle Shurmur said following a 26-43, 326 yard passing performance. “It just didn’t shake out our way.”

The game was decided late, but Vanderbilt will rue its missed opportunities. The Commodores had three promising scoring chances during the middle portion of the game that resulted in just three points.

First, Donaven Tennyson caught a strike from Kyle Shurmur down to the Notre Dame one yard line, only to be stood up and stripped of the football. Irish star Julian Love recovered one of his two fumbles on the day after a mad scramble in the end zone.

The very next drive Tennyson had a well designed pass bounce through his hands on a likely touchdown, forcing Vandy to settle for a field goal as time expired on the first half. Ryley Guay also missed a field goal on the Dores’ opening possession of the third quarter.

“The difference in winning or losing in this game is putting the ball through the uprights or in the end zone,” Vanderbilt head coach Derek Mason said. “If we do that, I think we can win this game going away, I really do. But that wasn’t the case.”

It would have been a monumental win for Mason and Vanderbilt in his fifth season at the school. The Commodores took a step back, failing to reach a bowl game last season, but look to have a team ready to compete with anyone this fall.

This is a veteran team that has been through the battles, falling just short numerous times in their career. They believed, even when trailing by double digits against the no. 8 team in the nation on the road, that they would still get it done.

“It’s (a) disappointment,” said Jared Pinkney, who pulled Vandy within five by plowing his way into the end zone at the end of an 18-yard pass from Shurmur midway through the fourth quarter. “We were supposed to win that game. We showed we were the better team. We had too many red zone opportunities and too many opportunities down near the goal line and we didn’t capitalize.”

The stat sheet shows the Commodores with a 420-380 edge in total yards, a statistic that would slant significantly more in their favor after the first quarter. The missed opportunities just proved too much to overcome.

And that’s not okay with this group or their head coach.

“There are no moral victories in this game, you win and you lose and that’s it,” Mason said. “Let’s not try to sugarcoat it with we had a chance. That’s not what you’re looking for, you’re looking for a win. If you have a chance to win it, let’s win it.”

Ultimately, football is judged by wins and losses and Mason knows that as well as anybody. The Vanderbilt team that battled mighty Notre Dame for three and a half hours Saturday in the shadows of Touchdown Jesus looked like it will win more than it loses.

But the Commodores must avoid the letdown they had a year ago when a loss to number one Alabama spiraled the team following a 3-0 start. The team’s veteran quarterback warned of the perils of allowing a hangover to set in after one loss.

“This one will hurt the rest of the day,” Shurmur said. “But speaking to last year, we can’t let one game turn to two or three losses. The bottom line is we’ve got to move forward. We’re going to look at our mistakes and move forward.”

And that’s why Vanderbilt leaves Notre Dame Stadium with its head held high. The Commodores didn’t win Saturday, but they showed the mettle of a team that can, and, perhaps most importantly, expects to win this season.

There are bigger games ahead, starting with next week’s SEC opener against South Carolina. And the Dores vow to be ready.

Read More: No. 8 Notre Dame Holds On For 22-17 Victory Over Vanderbilt