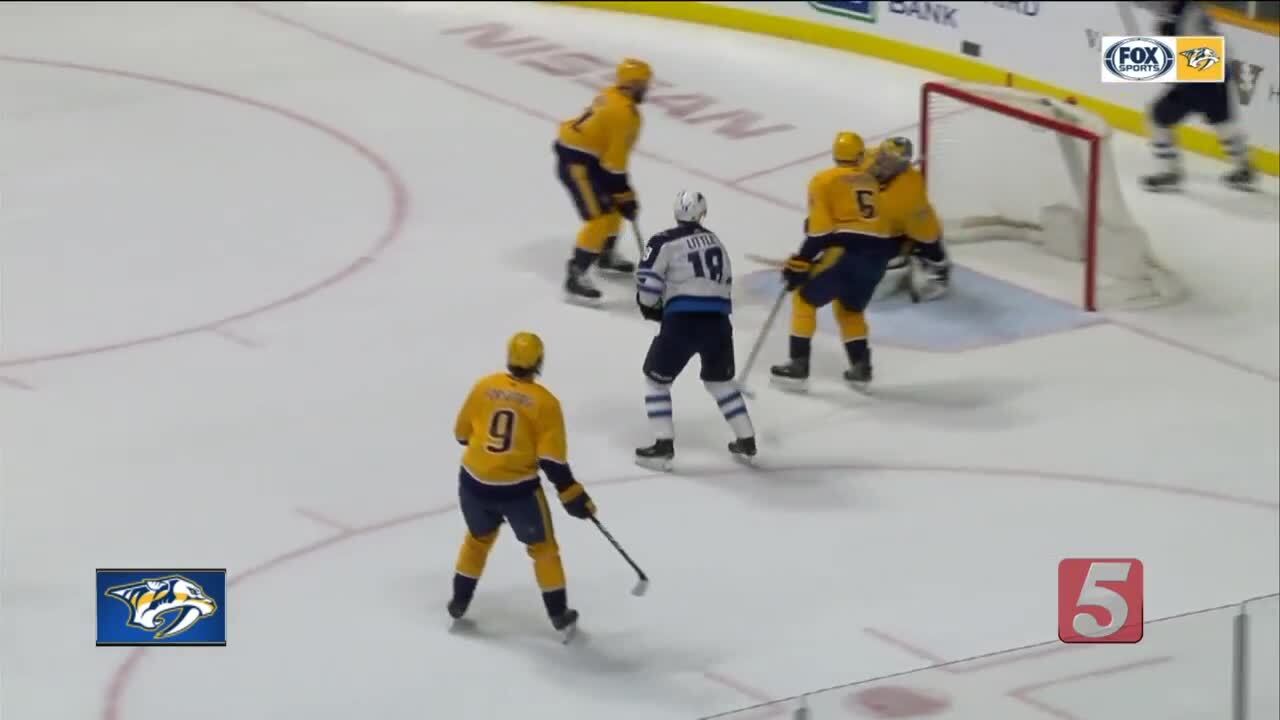 NASHVILLE, Tenn. (WTVF) — I was in the camp that the Predators did not need to make a move ahead of the NHL’s trade deadline. This was the best team in hockey last season and when it gets fully healthy after the All-Star break I expect it to return to a consistently elite level once again.

But Thursday night’s loss to the nemesis Jets made me rethink my opinion. Predators general manager David Poile has to do something if this team is going to get past Winnipeg.

And make no mistake, the Preds are going to have to get past the Jets. The same team that eliminated them last year by this same 5-1 score here on home ice will almost certainly be in their way again come late April in the second round.

Watching this latest home defeat made it clear that this Predators team isn’t built to beat the hefty Jets over the course of a seven game series.

Yes, it’s only one regular season game. But it’s the last look at these two teams on the same sheet of ice before the trade deadline. When they meet again in Winnipeg in March rosters will be all but set for the playoffs.

So the time to make a move is now, and it needs to happen. The Jets delivered the same 60 minute effort Thursday that silenced the Smashville crowd on three of four nights last spring. They won the physical battles against the boards and in front of the net, capitalizing on their offensive opportunities and stifling the Preds’ chances.

The greatest illustration of that came in the second period. With Nashville buzzing Kevin Fiala turned it over, leading to a Jets possession in the offensive zone. The Preds fought hard to get the puck back, but Fiala quickly turned it over again and Joe Morrow hit Mason Appleton backdoor for a 2-0 lead.

Fiala is the poster child for what ails the Predators against the Jets. He’s a fast, skilled and capable goal scorer, but he’s prone to mistakes, especially when being pushed around by Winnipeg’s huge forwards. He completely disappeared last year in the playoffs along with slender linemates Kyle Turris and Craig Smith.

The Predators chalked it up then to just a bad series for the trio, but despite Turris’s absence Thursday due to injury, it looks more and more like it may just be a bad matchup.

That’s Poile’s job to figure out, and decide just how to go about fixing it. The hot talk on Twitter and social media is that the Predators should go after Flyers’ bruising forward Wayne Simmonds, who would be able to push back against the Jets and provide some scoring punch for Nashville’s anemic power play. But at what cost?

Is Simmonds, who would likely just be a rental through the end of the season before he reaches unrestricted free agency, worth trading another first round pick? Would you deal of the team’s two highly regarded prospects Eeli Tolvanen or Dante Fabbro for him? Or an enigmatic, young player with Fiala’s potential upside?

The window for this Predators team to win it all is open, and appears like it should be open for a few more years with the core of this team intact. But nothing is guaranteed in sports, so the time is now.

The next step for Poile and the Predators isn’t clear. But what is clear is that they need to do something, and it needs to be done with beating the Jets in mind.

Nashville is good enough to beat anyone in the league, but it isn’t built to beat Winnipeg.

And since these two teams appear destined for another second round collision, right now that’s the only opponent that matters.