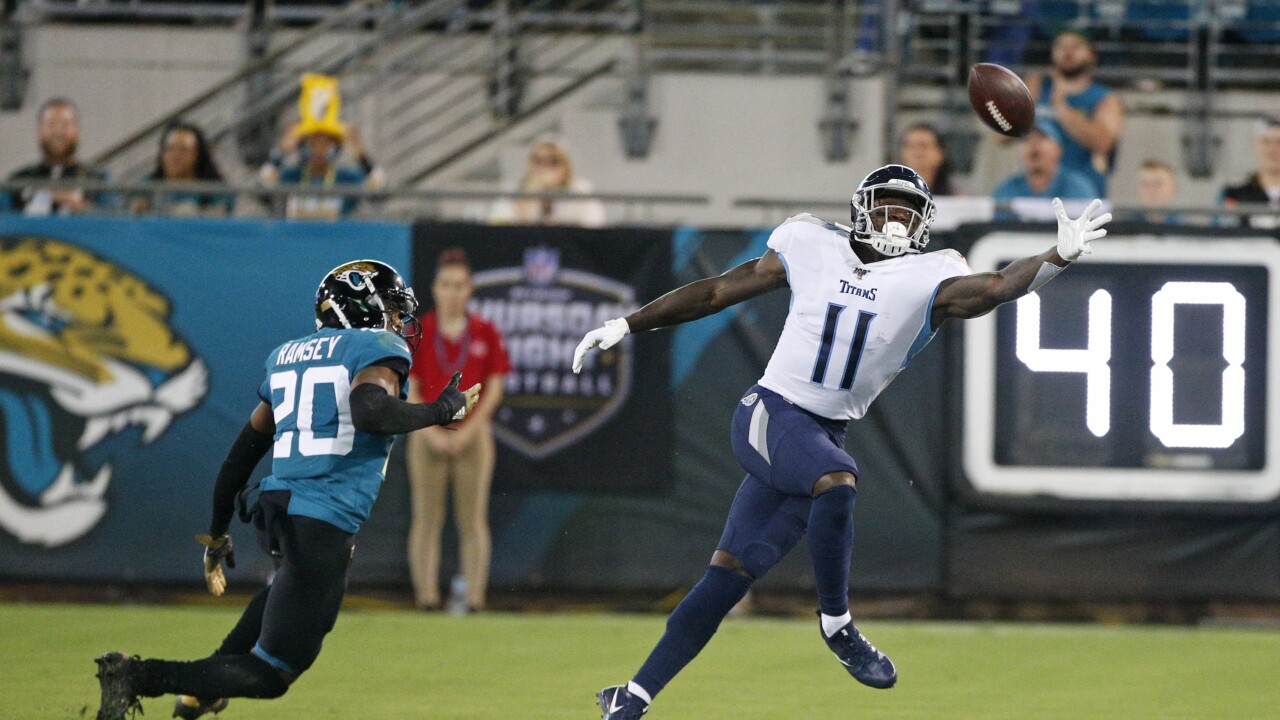 Stephen B. Morton/AP
Tennessee Titans wide receiver A.J. Brown (11) reaches for a pass as he is covered by Jacksonville Jaguars cornerback Jalen Ramsey (20) during the first half of an NFL football game, Thursday, Sept. 19, 2019, in Jacksonville, Fla. Brown was called for offensive pass interference on the play. (AP Photo/Stephen B. Morton)

JACKSONVILLE, Fla. (WTVF) — From bad to worse. The Titans followed up Sunday’s frustrating home loss to the Colts by laying an egg Thursday in a monsoon in Jacksonville. They were out-played, out-toughed and out-coached in a 20-7 loss that completely erases their week one beatdown in Cleveland and drops them to 1-2 on the season.

For the first time in three games the Titans prideful defense did not yield an opening drive touchdown. It didn’t matter. On the Jacksonville punt Adoree’ Jackson tried to field a bouncing ball, slicked by the rain, and muffed it, handing it to the Jaguars at the seven-yard line. A play later rookie quarterback Gardner Minshew hit James O’Shaugnessy for a touchdown and a 7-0 lead.

After the Titans punted, Minshew led Jacksonville right down the field for another score. Making just his second start, Minshew was turned loose by aggressive playcalling offensive coordinator John DeFilippo and dropped a pair of dimes, first to Dede Westbrook over an outstretched Malcolm Butler for 28 yards and then a 22-yard touchdown to D.J. Chark to make it 14-0. It was the type of start that a Jaguars team that had lost its first two games and its starting quarterback needed to feel like it could compete against a rival that had owned them, winning six of the last seven meetings including four in a row.

But this time the Titans had to adjust from their gameplan, forced to play from behind yet again, putting pressure on a quarterback and an offensive unit that has struggled mightily the last two weeks.

Once again the offensive line struggled to block for Derrick Henry or keep Marcus Mariota upright. Receivers failed to quickly create separation, and when they did, Mariota often missed them. First and second down struggles continued which meant the Titans spent much of the night in third and long again. After going just 3-20 on third downs over the first two games of the season, they faced distances of 16, nine and 24 yards. Not exactly high percentage plays.

The Titans entered tied for the fewest penalties called against this season, but committed 10 in the first half, many by an overmatched offensive line that ultimately gave up nine sacks. Even when he had time, Mariota and the Titans were unable to connect. Henry dropped a screen pass that was beautifully set up to likely go for a touchdown. Mariota had a pass intended for a wide open Delanie Walker in the end zone tipped away by a linebacker, and also overthrew a wide open Sharpe when he beat his man on a double move that could’ve gone for six.

For all the mistakes and missed opportunities, the chances were still there to win this game. Right after Mariota missed Walker on the would-be touchdown on the opening drive of the second half, Mike Vrabel elected to go for it on fourth down instead of kick a 29-yard field goal. The result was a sack. And instead of a 14-3 game, the Jaguars soon drove down the field to make it 17-0.

It was an overly aggressive decision by Vrabel that backfired, preventing his team from pulling within a score when Henry ran in a one-yard TD early in the fourth quarter. Not that it would matter anyway with Jacksonville pass rushers pinning their ears back to harass Mariota and this beleaguered offensive line.

The Titans need Taylor Lewan back in the worst way. Kevin Pamphile, too. Perhaps the later will be able to return for another difficult road test in Atlanta next week as Lewan serves the final game of his PED suspension
They also need Mariota to play better. His completion numbers and touchdown to interception ratio aren’t bad through three games, but he continues to leave plays on the field that a NFL quarterback has to make. Right now the Titans have the worst offense in the AFC South and two of the four teams have backup quarterbacks running the show.

You can blame the offensive line or the playcalling or wide receivers not being where they are supposed to be on certain routes. There’s some validity to all those claims, but the excuses are running tired with Mariota. Injuries, new offensive systems every year, a lack of weapons were all reasons used to explain why he didn’t progress as expected over the past couple seasons. But this is a make or break year for him as the Titans franchise quarterback, so it’s time to put up or shut up. And after the last two weeks of offensive futility even the most ardent Mariota fans are starting to grow skeptical that he can get the job done in this offense.

There’s still a lot of season left with 13 games left to play, but this team is light years away from the good to great slogan they kept preaching all summer long.

What we saw Sunday against the Colts in the record heat at Nissan Stadium was bad. What happened Thursday night in the rain in Jacksonville was even worse.

And it should cause every coach and player in that locker room to take a good, long look in the mirror.