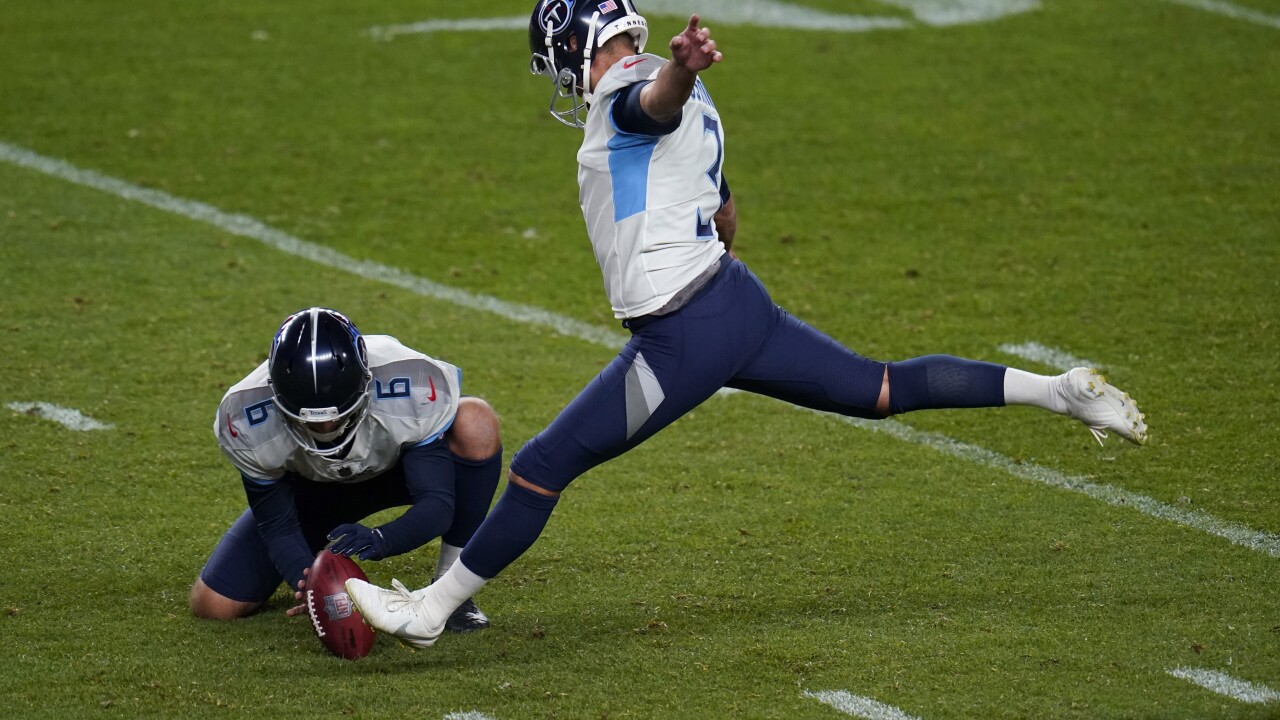 (WTVF) — There was never a doubt, right? Stephen Gostkowski shook off a brutal kicking debut with the Titans to make the game-winning field goal from 25 yards out with :17 to play Monday to help Tennessee pull out a 16-14 victory in a bizarre season opener in Denver.

Redemption? More like an expectation. Gostkowski missed three makeable field goals that would have given the Titans leads. He also missed a critical extra point. But he made the one that proved to be the difference.

“It’s an opportunity I didn’t deserve,” Gostkowski said after the game, while answering every question about his erratic right foot. “I just got here so for me to go out there and play like that and for guys to still support me, that’s why I was grateful for the opportunity at the end because the guys deserved to win.”

Gostkowski took his kicking shoe off after the fourth miss to re-lace it, and joked after the game that he would’ve taken his pants off to make the final kick. That’s the only way this opener could’ve gotten weirder for the three-time Super Bowl champion and one of the most accurate kickers in league history.

Credit to him for sticking with it, and credit to the Titans for giving him another chance.

“It’s like roulette,” Mike Vrabel said. “It’s been red 10 times, I’m betting on black this time.”Gostkowski pushed his first kick, a 47-yard field goal in the first quarter, wide right. He had a 44-yarder blocked just before half. Then followed with a 42-yard miss in the third quarter, and a shanked extra point after the Titans briefly took the lead 13-7 on Ryan Tannehill’s fourth and goal TD toss to a wide open Jonnu Smith.

The four misses cost the Titans 10 points and lowered their in-game win probability by 33 percent. Instead of leading 23-7 early in the fourth quarter, Tennessee soon found itself trailing. Melvin Gordon’s one-yard touchdown run capped Denver’s 75-yard response on the ensuing drive. The Broncos made their extra point and took a 14-13 lead with 9:08 to play.

The Titans didn’t answer immediately. The offense bogged down with back to back three and outs. But the defense held the deficit at one and got them the ball back with 3:05 to go.

Tannehill drove the Titans 83 yards in 12 plays, hitting A.J. Brown for 16 yards and drawing a pass interference flag with another target to the second-year wide out. Derrick Henry capped his 31-carry, 116-yard night with runs of five, 13, four and five to get the ball into the red zone. The Titans were hoping to avoid that final kick, but Tannehill overthrew Brown on a fade into the corner of the end zone on third down. That forced Vrabel to call on Gostkowski for the chip shot field goal.

“I mean, it wasn’t pretty,” Tannehill said. “We didn’t come out and execute the way we wanted to for the length of the football game, but we battled and the guys keep battling. We fought through a lot of adversity and we found a way to win in the end. When we needed to put points up, we found a way to do it. I’m proud of the guys and how we battled through that adversity.”

Denver provided some help. Offensive coordinator Pat Shurmur called passes on two of three plays on a possession that started with just 4:06 to play. Both fell incomplete saving the Titans precious time. Then when Tennessee moved into field goal range, Denver coach Vic Fangio did not elect to use any of his timeouts to save time for his offense or to ice Gostkowski before that critical kick.

It was not pretty, but a win is a win. No preseason action meant miscues, misalignments and penalties, including the ejection of linebacker Rashaan Evans after he was cited for unsportsmanlike conduct for throwing a punch at Broncos’ tight end Jake Butt.

But the Titans did enough to win. They got the stop they needed, the drive they needed and the kick that had eluded them all night.

“The tougher it gets, the better we are,” Vrabel said. “We can embrace those tough football games and win those tight football games.”

The Titans are grinders, so this result won’t bother them. But the continued kicking issues have to. They can correct the mistakes and eliminate the penalties, but the leave Denver once again wondering if they have anybody on the roster who can consistently kick the ball through the uprights.

NFL kickers are supposed to be nearly automatic, but Titans kickers have been comically bad since the start of last season. Gostkowski’s winning kick was just the team’s ninth made field goal in 22 attempts over that span.

It didn’t cost them Monday night, but Vrabel knows the Titans have to figure the kicking game out or it will at some point this season, just as it did last year.

“We all have a job to do and I’m very confident it’ll get corrected,” Vrabel said. “We’ve got to make them. Fortunately for us, it didn’t cost us the win.”