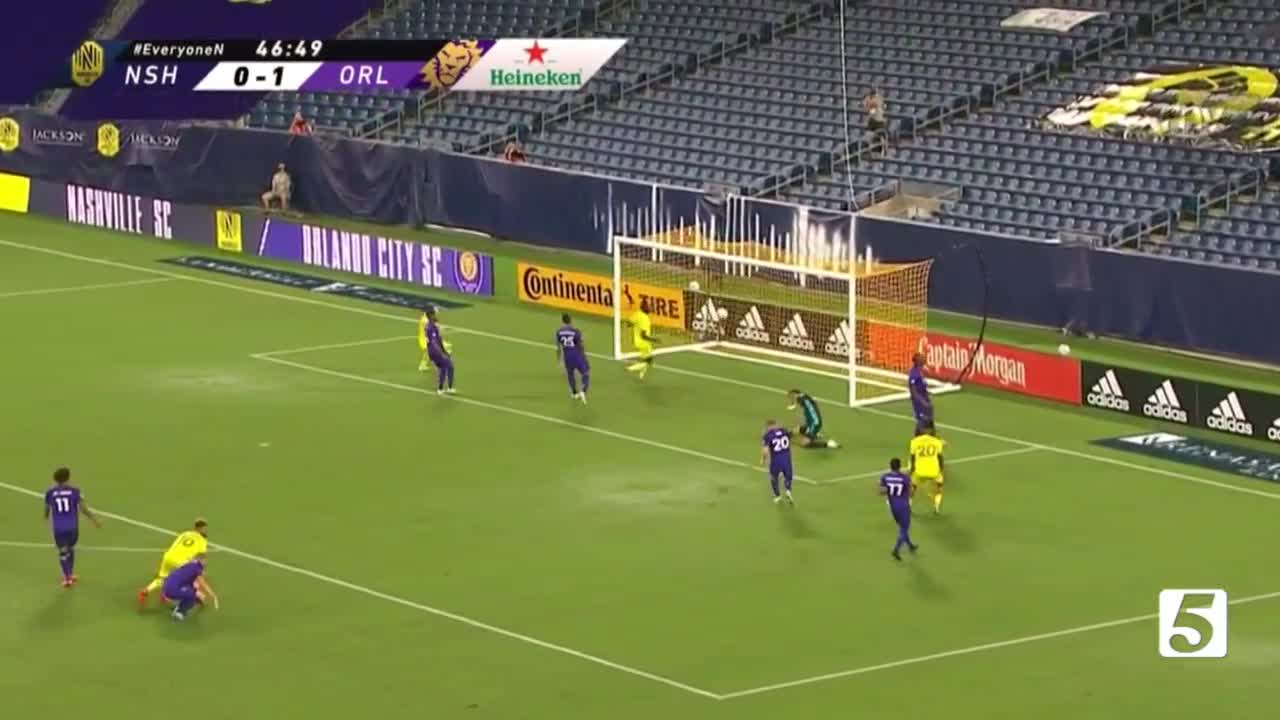 Who needs fans for a little homefield advantage? Nashville S.C. turned in perhaps its most impressive performance of its inaugural season rallying from a 1-0 halftime deficit against Orlando City S.C. Wednesday inside an empty Nissan Stadium.

NASHVILLE, Tenn. (WTVF) — Who needs fans for a little homefield advantage? Nashville S.C. turned in perhaps its most impressive performance of its inaugural season rallying from a 1-0 halftime deficit against Orlando City S.C. Wednesday inside an empty Nissan Stadium.

It was the second straight positive result at home for Nashville after its return to MLS play last month, giving the club four points in just four days after a 1-0 victory over Inter Miami on Sunday.

Even more impressive than Wednesday’s result was the way Nashville earned its way back into the match.

After a rather uneventful start to the match, the boys in gold found themselves behind. Benji Michel finding some open space after Anibal Godoy slipped and rocketing a shot from just outside the box past a diving Joe Willis into the upper corner of the net. It was yet another world-class strike against a Nashville side that has only given up nine now in eight matches this year.

But despite trailing against a side that dominated the second half last Wednesday on the way to a 3-1 result in Florida, Nashville responded. Led by the aggressive play of defender Daniel Lovitz and the creative work of Randall Leal they started to create some opportunities late in the first half.

And just two minutes into the second half Leal broke through for the equalizer. In a nifty sequence, Leal fed Godoy on a give and go. Once he got it back he hit Hany Mukhtar, who should the skill that got G.M. Mike Jacobs to bring him in as the club’s first designated player, with a beautiful touch back to Leal who finished expertly in the box.

It was the first career MLS goal for Leal, and the type of clinical execution that had been missing from the Nashville attack through the first eight matches of the year.

Nashville kept pressing. Dominique Badji and David Accam both forced saves with strong shots, but it was Orlando City that had the best chances late.

And it was goalkeeper Joe Willis that saved the day for Nashville. In the 84th minute a contested header sent the ball down to open space in the box. Willis decisively closed out and slide to deflect the shot from Junior Urso out of play.

That save prevented what was almost certainly a goal for Urso and delivered a positive result for Nashville against an Orlando City team that finished as runner-up in the MLS is Back Tournament and sits in third place in the Eastern Conference table here in early September.

It was the type of result you might expect with the help of a boisterous home crowd. But even without their backline supporters, Nashville S.C. turned in a strong performance that should further boost their spirits as they now return to the road again for a match Sunday in Miami.