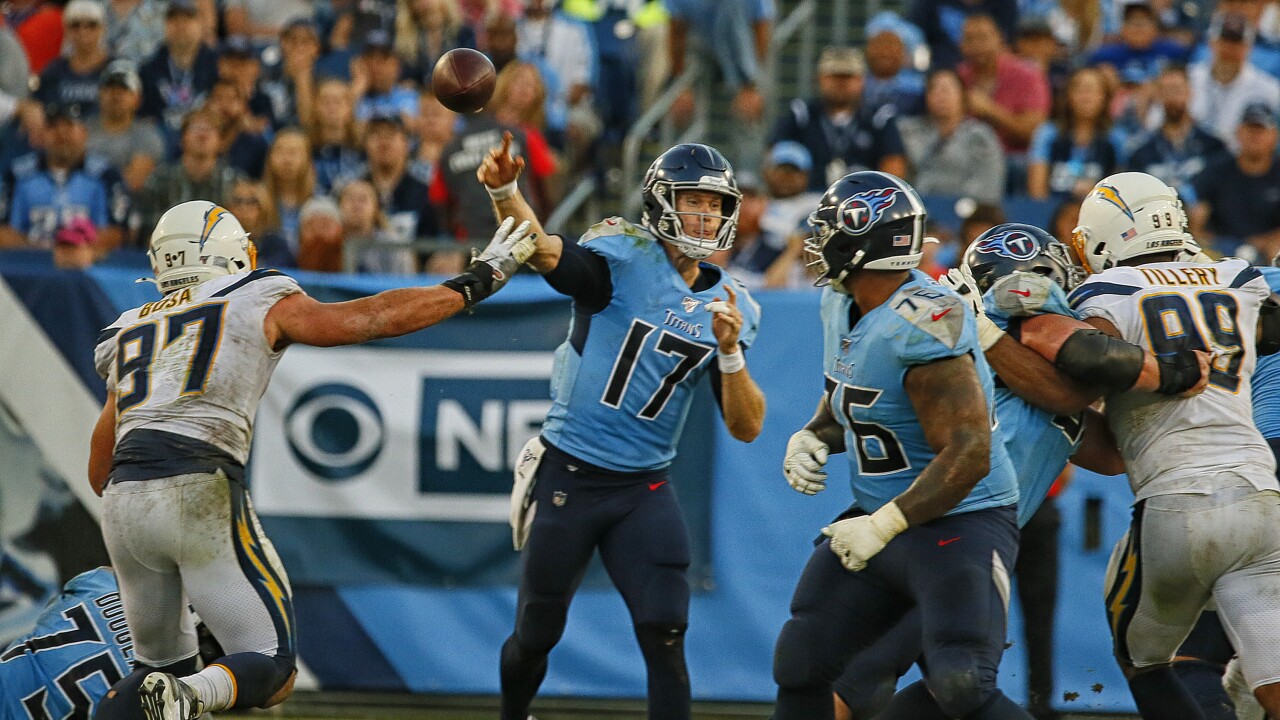 NASHVILLE, Tenn. (WTVF) — The day started with a spark from a new quarterback and finished with a furious goal line stand by a defense that may have just saved the Titans’ season by securing a 23-20 victory over the Chargers.

Los Angeles appeared to have won the game twice. First, when Austin Ekeler took a Phillip Rivers pass 15 yards right down to the goalline. He initially was ruled to have scored a touchdown that would’ve given the Chargers the lead with less than a minute left, but replay showed he was down at the half yard line. After the teams’ traded penalties, it appeared Melvin Gordon would be the one to put L.A. on top. But his apparent touchdown was also overturned when replay showed his left knee was down with the ball short of the end zone.

It was as wild as any final sequence of plays in the history of Nissan Stadium, and it ended on second and goal when Gordon was stood up short of the goalline again and stripped of the football by Wesley Woodyard. Jurrell Casey recovered the ball in the end zone and the Titans survived for a win they absolutely had to have.

It was an especially sweet moment for a defense that still is yet to allow more than 20 points to any opponent this season, but has struggled to come up with critical stops late in games. Both the Colts and Bills were able to march for game-winning fourth quarter touchdown drives on this same field earlier this season. Had the Chargers been able to do the same after trailing by 10 points midway through the fourth quarter, it would be easy to see how this season could just crash and burn.

But instead the Titans got the stop and emerged with a new lease on life, now at 3-4 on the season, with three of their next four games at home and a new QB providing a spark.

Ryan Tannehill made his 89th career start, but first as a Titan, Sunday and ignited the team’s struggling passing game. His 80% completion percentage, 323 passing yards and QB rating of 119.9 were all season highs for Tennessee. The former first round pick and starter in Miami for six seasons replaced Marcus Mariota in the second half of last week’s 16-0 loss in Denver, but was unable to get the Titans to the end zone. With the benefit of a week of practice under his belt, Tannehill played with confidence Sunday, displaying decisiveness and a strong and accurate arm.

He simply made throws that Mariota either physically can’t make or lacks the confidence to make at this point in his career, after all the injuries and different offense he’s been in. Some feel like Mariota needs a fresh start away from Tennessee. Tannehill’s performance Sunday is evidence that that can be exactly what the doctor ordered.

Tannehill spread the ball around to seven different receivers, including Corey Davis and A.J. Brown who both registered six receptions. Those two high draft picks displayed their promise while Adam Humphries finally looked like the underneath chain mover the Titans signed him to be this offseason. The offense was far from perfect, but when you couple the passing game with 90 yards rushing from Derrick Henry it was at least functional. And that’s more than what you could’ve said for the offense that mustered just seven points over the previous 10 quarters entering Sunday.

By scoring 23 against the Chargers, the Titans improved to a perfect 9-0 when they have scored at least 21 points in the season-and-a-half that Mike Vrabel’s been their head coach. Reach the end zone three times in a game, and victory is automatic.

And that’s the thing. The Titans don’t need their offense to become prolific, they just can’t afford for it to be horrific. The defense carries this team and will give it an opportunity to win every week. It just needs the offense to do its part.

On Sunday, led by Tannehill, the offense got going. And then turned it back over to a defense that came up with the stop of the year to help keep the season alive.