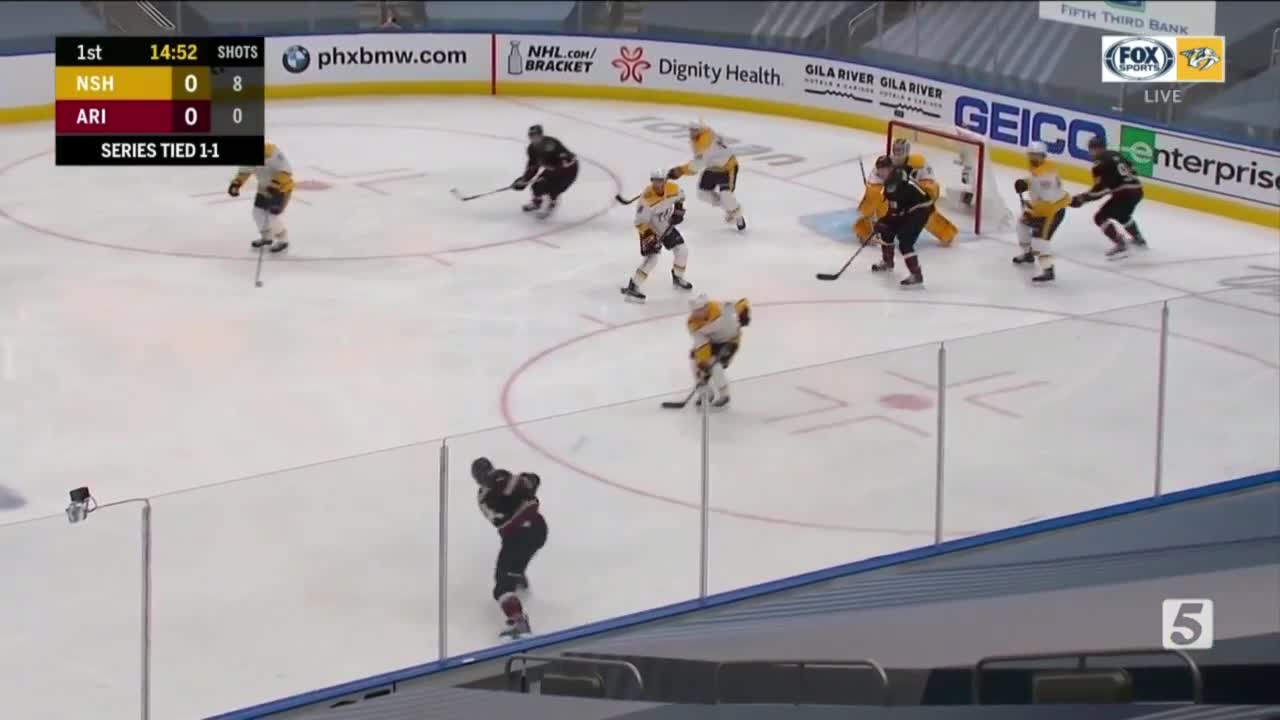 The Nashville Predators are down 2-1 in the playoffs after losing to the Coyotes Wednesday.

NASHVILLE, Tenn. (WTVF) — For much of Wednesday, and perhaps much of this series, the Predators have been the better team than the Coyotes. But Arizona has been more clutch, more disciplined, a bit more lucky and now is one win closer to advancing after a 4-1 victory in game four of this Western Conference Qualifying series.

Nashville meanwhile faces elimination already in game four Friday (1:30 p.m.) in what currently feels more like an extended road trip instead of some kind of a postseason run inside hockey’s impenetrable bubble in Edmonton. It’s hard to get in, even harder to stay there.

It probably should be the Predators up 2-1 in this best-of-five series even after a disastrous first period cost them game one on Sunday. The Preds certainly deserved a better fate in game three when they came out buzzing.

The rejuvenated line of Ryan Johansen, Filip Forsberg and Viktor Arvidsson had three scoring chances on their opening shift and dominated the action just about every time they put skates on the ice. Nashville fired the first 12 shots of the game, and 40 in all, but it was Arizona that struck first when Christian Dvorak’s stick deflected a puck by Juuse Saros.

All that hard work and the scoreboard read 1-0 Coyotes after one period. Such is life in hockey.

Credit the Predators for sticking with it and tying the game on Arvidsson’s second goal in as many days. The rejuvenated JOFA line continues to dominate, now with four goals and four assists through three games.

But once again secondary scoring has become a major issue for the Preds in the postseason. The second line of Matt Duchene, Mikael Granlund and Kyle Turris are yet to record a point in Edmonton, the continuation of the second line woes that started in the 2018 postseason.

It looked for a brief moment like the trio had given Nashville a third-period lead when Turris deposited a perfect Roman Josi drop pass top shelf past a near-flawless Darcy Kuemper, who recorded a season-high 39 saves in the contest. But Coyotes coach Rick Tocchet saw something that appeared off and challenged the goal for offsides.

The replay clearly showed that Duchene was inside the zone before Josi carried the puck across the blue line, nullifying the goal despite the fact he wasn’t really part of the action.

Josi, the team’s captain, was forced to try to explain the mistake after the game since Duchene was not made available to comment with only two players required to go to the media podium. Josi said it was the type of thing that happens numerous times in the course of a game and unfortunately just took away a goal.

He’s not wrong. But offsides can not happen at that juncture by a player making $8 million that didn’t even factor in the play. It’s a mistake that took away a potential game-winning goal and may have swing the series.

The Preds didn’t hang their heads. They kept attacking, but another mistake came on a counter attack minutes later when three Predators tracked towards Derek Stepan on an Arizona rush. He sent a pass to the slot where Conor Garlund deked a slow to arrive Mattias Ekholm and ripped a shot past a helpless Saros.

The mistakes were not done. Craig Smith leveled Garlund with an illegal check in the neutral zone with just under 5:00 to play. The resulting power play led to a Taylor Hall goal that put the Coyotes up 3-1 and put the game out of reach.

The Coyotes have been clutch. The Predators have failed to capitalize on the momentum their play has generated. And now their season is on the brink.

The series is not over. Nashville has the talent to beat Arizona Friday and again Sunday in game five, and it will still be an upset if the ‘Yotes can finish the job.

But the Preds have to stop beating themselves or it will happen.