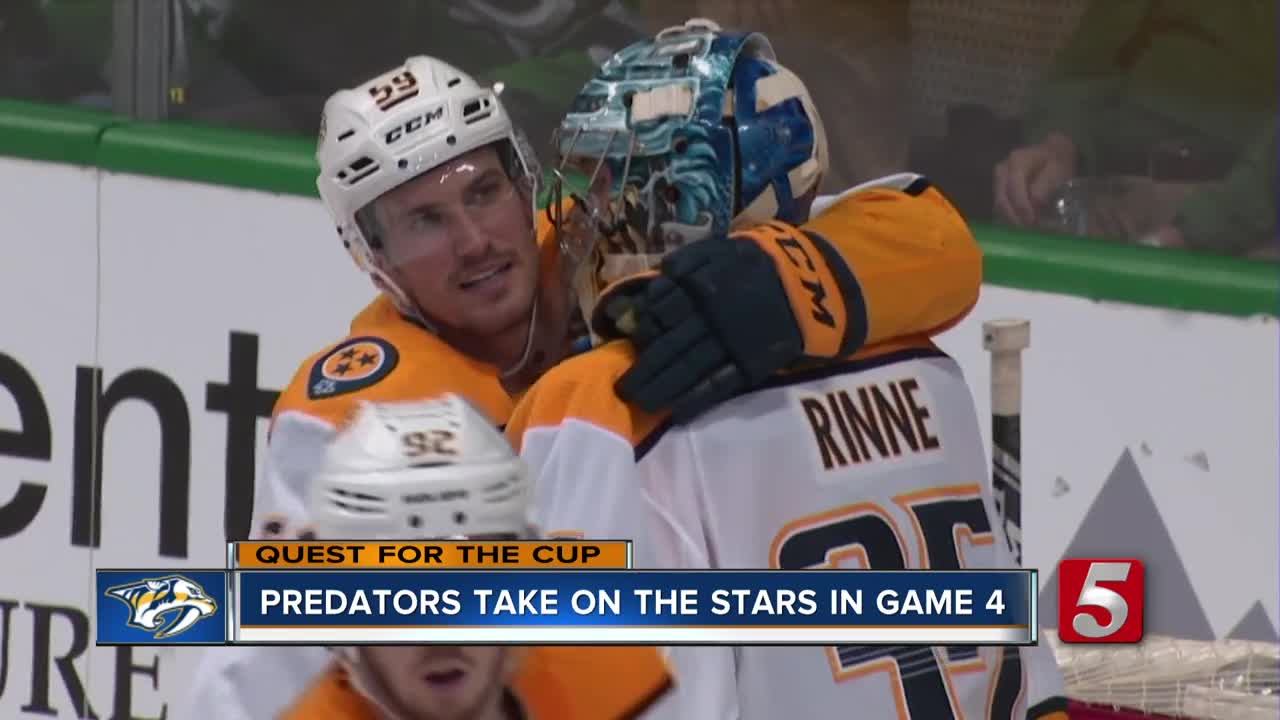 The Predators know they are at their best when they are the team doing the attacking, and will look to get back to their game tonight. They know a fast start can be critical in a building that was roaring Monday behind a Stars team making its first playoff appearance in three years.

DALLAS (WTVF) — There was an interesting juxtaposition Wednesday morning if you walked between the Stars and Predators dressing rooms ahead of game four.

The Predators won game three 3-2 here at American Airlines Center Monday night, but it was the Stars that controlled much of the play, which has them feeling good despite trailing 2-1 in this best-of-seven series.

“We got the win last game, but didn’t play all that well,” forward Austin Watson said Wednesday. “I think this is an opportunity for us to get back to playing Predators hockey.”

The Stars won the possession battle Monday and tilted the ice in their favor for long stretches of the second and third periods. After being outshot decisively in the first two games in Nashville, Dallas held a 42-28 edge in shots on goal in game three.

That attacking type of game is the way the Stars hope to play moving forward in this series.

“We keep playing like that and eventually it’s going to give,” Stars center Jason Dickinson said. “That’s why there’s seven games in the series and we’ll keep pushing it to the edge.”

With Dallas aggressively forechecking and moving into the offensive zone with ease, Nashville spent much of the night on its heels playing defense. The Stars creating a whopping 28 high danger chances, but only managing to get three to go.

“We weren’t happy with our game,” Predators captain Roman Josi said. “I think we can play a lot better. Pekks kind of stole a game for us. I don’t know about them, but for us, obviously, there’s a lot of things we can do better.”

The Predators know they are at their best when they are the team doing the attacking, and will look to get back to their game tonight. They know a fast start can be critical in a building that was roaring Monday behind a Stars team making its first playoff appearance in three years.

“We’ve had our success by playing the game a certain way,” Predators coach Peter Laviolette said. “I’ve always said you try to play more of your minutes than the other team gets to play their minutes. We just have to get back to our identity.”

If the Preds can do that they have a great chance of grabbing complete control of this series. A win tonight would give them a 3-1 series edge heading back to Nashville for game five Saturday.

History tells us that margin in a series is important. Only 28 teams have recovered from a 3-1 deficit to win a NHL playoff series, meaning Nashville would have a better than 90 percent chance of moving on to round two.