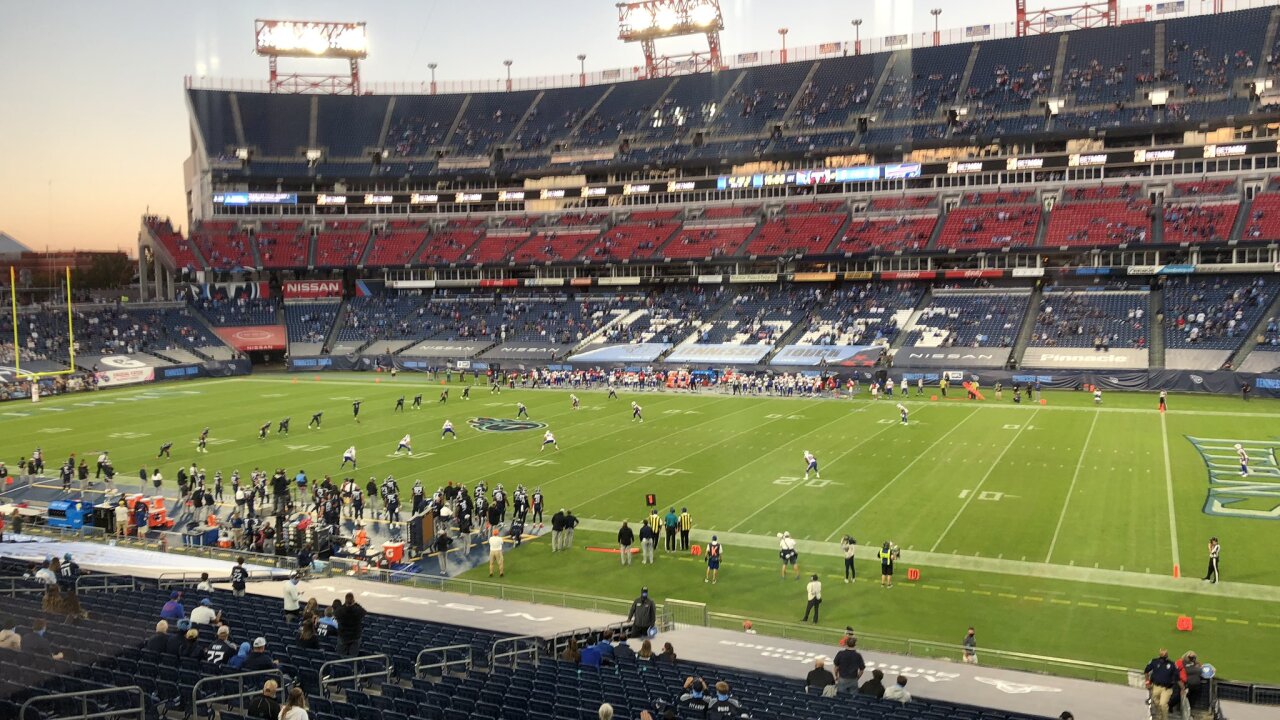 About 8,600 fans were on hand at Nissan Stadium, a sellout under the stadium's COVID-19 restrictions, for the Titans first game since a temporary shutdown due to COVID-19

NASHVILLE, Tenn. (WTVF) — The positive tests piled up. The lights at the team facility stayed dark. For nearly two full weeks the Titans were living a nightmare, quarantined out of the NFL’s schedule due to the Coronavirus. They were allowed to reemerge in time for the just the third Tuesday game in the NFL since 1946, a 42-16 romp over the previously unbeaten Bills.

Malcolm Butler intercepted a Josh Allen pass that slipped through Andre Roberts’ fingers on the third play of the game and there were cheers. The Titans welcomed fans back to Nissan Stadium for the first time in 10 months, officially there were 8,403 of them that should be commended for the noise they made, helping to provide a sense of normalcy to a game that was anything but routine.

The Titans held just two practices and a walk through in the last 16 days, yet circled the wagons for one of the most impressive wins in franchise history.

The team was without eight of the 13 players that tested positive who remain on the COVID-19/Reserve list, and two more players, cornerback Kristian Fulton and linebacker Kamalei Correa, were removed too late to have any impact on the game. The coaching staff was also without two members who were among the 11 positive from staff since September 24th.

Yet none of it seemed to matter as the Titans quickly capitalized on Butler’s interception when Ryan Tannehill welcomed A.J. Brown back to the lineup with a 16-yard strike that made it 7-0 just 2:15 into the game. Brown is the team’s best receiver, and he made a huge impact coming back from a bone bruise that sidelined him the previous two games. The second year star caught a team-high seven passes for 82 yards to make up for the fact the team’s top two pass catchers so far this season, Corey Davis and Adam Humphries, were among the group that was out.

The Titans also got a boost from Kalif Raymond, who continues to play much larger than his stature. The 5’8 speed merchant broke a 41-yard punt return late in the first quarter, then converted a third and 20 Tannehill pass for a first down to set up a one-yard Derrick Henry TD that made it 14-7.

The Titans capitalized on the short field four times. Butler’s second interception, a horrendous decision by Allen, was returned 68 yards down to the Buffalo 12, and set up the first of two touchdown passes to tight end Jonnu Smith. The Titans finished 6-6 in the red zone with Tannehill throwing three touchdowns and also running one in.

When the Titans recovered a Bills’ fumble on a kickoff return with under 4:00 to go leading 35-16, starters like Henry, Brown and linemen Taylor Lewan and Rodger Saffold were pulled to rest up for Sunday’s game against the Texans, which is now less than five days away.

Who saw this coming? The Bills were 4-0 and one of the most impressive looking teams in the league. Allen was an early season MVP candidate until he got rattled Tuesday.

The Titans were a mess. A team without a home, literally, for much of the last two weeks whose only day of work in the first week of the saga came in the form of two off-site, player organized workouts that are still the subject of a NFL and NFLPA investigation. But while the league looked into what happened and opponents were pointing fingers, casting blame and, perhaps hopefully, wishing for the worst possible punishments, the Titans stayed positive, started testing negative and used all the leaks and barbs to fuel their fire.

Safety Kevin Byard said upon the team’s return to work Saturday that he “took note of what people were saying” and that it will “definitely motivate me.” That should come as no surprise. Mike Vrabel loves a challenge, and this team reflects the personality of its head coach maybe as much as anyone in the league. They relish the doubt.

“They blamed us for everything,” Lewan said as he defiantly walked off the field after the game Tuesday. “They hate us.”

The Titans showed the haters what this team is made of, even shorthand and with Henry rushing for only 57 yards on 19 carries, though he did have two touchdowns. They did it behind Tannehill, who was the best player on the field, hitting reliable targets like Brown and Smith, and guys that rose to the occasion, like Nick Westbrook-Ikhine and Cody Hollister, after being elevated to the active roster. The defense had its struggles, failing to get off the field 13 times on 17 third downs and allowing 370 yards, but forced three key turnovers that turned the tide.

“We’ve has some really satisfying (wins),” Tannehill said after his 21-28 performance, “But with what this team, what this organization has been through the past couple weeks, to really fight that off, shake it off... I think that makes a statement.”

This team believed they could win when very few others outside of their socially distant locker room believed they could. Vrabel says everybody in the organization will receive a gameball for helping the team get through two of the darkest weeks in NFL history.

But the head coach also made it clear what happened Tuesday night was exactly what his team set out to do.

“You don’t all the sudden galvanize when things are bad,” Vrabel said. “I think it’s a testament to the players and the things we’ve tried to build here. You don’t (say), ‘Oh there’s a $#!+storm, let’s galvanize.

“We want to win every game.”

Improbable or not the Titans did just that. And when they wake up Wednesday morning the story will no longer be about testing. It’ll be about a 4-0 football team off to its best start in a dozen years, albeit nine days behind schedule.