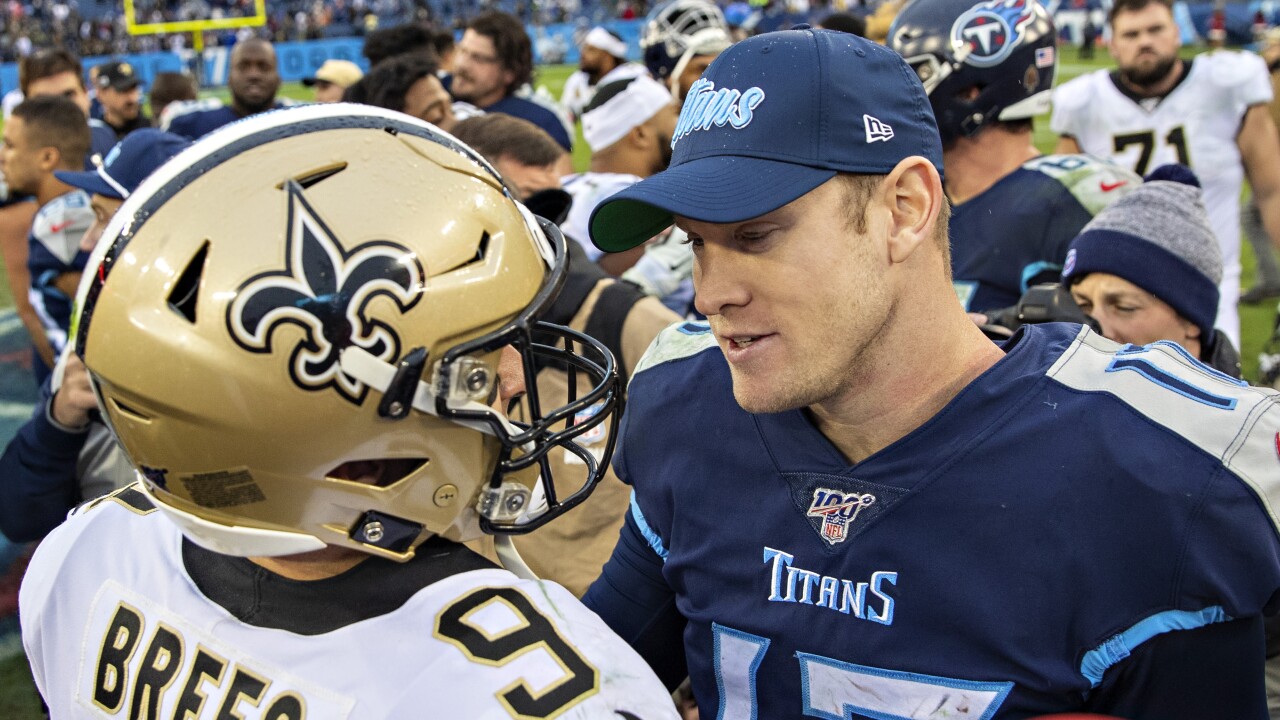 NASHVILLE, Tenn. (WTVF) — If it’s possible to win while losing, that’s what happened Sunday for the Titans. At the end of a weekend in which the most important results happened in games involving teams in other cities, the Titans find themselves in win and you’re in position for the playoffs despite Sunday’s 38-28 loss to the Saints.

If you’re still in the process of sending out Christmas cards, you might want to add the Jets to the mailing list after they toppled the Steelers 16-10 Sunday for just their sixth win of the season.

That was the result the Titans needed after the Texans clinched the AFC South title Saturday with a win over the Buccaneers in Tampa Bay. Pittsburgh’s loss means Tennessee now controls its destiny in the race for the AFC’s final wild card spot.

If the Titans can beat the Texans this week, in a game that’s been moved to the 3:25pm CST window on NewsChannel 5, it will finish the regular season at 9-7 and, more importantly, reach the playoffs for just the second time this decade.

And while the Titans lost to the Texans 24-21 at home just eight days ago, this road contest figures to shape up differently. Houston has already clinched the division title, in large part due to that win in the first meeting, and may have nothing to play for if the Chiefs beat the Chargers to lock up the AFC’s no. 3 seed in Sunday’s early window.

If that happens, the Texans will be locked into the no. 4 seed and the expectation is that head coach Bill O’Brien will choose to then rest several of his key guys to ensure they are ready for the playoff opener the following weekend.

Meanwhile, the Titans, who were unable to either clinch a playoff spot with a win or be eliminated with a loss Sunday, had the ability to hold out several of their key players against the Saints. The goal was clear; Mike Vrabel wants to have everyone available for what amounts to a playoff game in Houston.

Pro Bowl running back Derrick Henry has battled a hamstring injury over the final month of the season. He was certainly missed Sunday, as the Titans became one dimensional at times, passing on multiple third and one situations and allowing New Orleans pass rushers to pin their ears back and sack Ryan Tannehill five times. But that inconvenience against the Saints will be worth it if the day off allows Henry to be anywhere close to 100 percent while asked to carry what figures to be a heavy load in Houston.

The extra rest should also be good for cornerback Adoree’ Jackson, who’s missed three games with a foot injury, but returned to practice last week. Jackson would be a key addition to a secondary that missed his speed and coverage skills while trying to matchup with Texans’ star receivers DeAndre Hopkins, Will Fuller and Kenny Stills in week 15.

Special teams captain Darren Bates should also be able to return after his three week absence, and rookie defensive tackle Jeffery Simmons should be good to go after being held out with soreness in the surgically repaired left knee that caused him to miss the first half of the season.

If all those guys are able to go, the Titans will enter the most important game of the season as healthy as they’ve been in more than two months, with concerns lingering mostly at receiver where Adam Humphries hasn’t even practiced in a month and both Corey Davis and Kalif Raymond were checked out for concussions late in Sunday’s game.

Being healthy for this game is huge. It’s something the Titans were able to achieve two years ago when they beat the Jaguars in week 17 to get into the playoffs, but not last season when Marcus Mariota, Jurrell Casey and Logan Ryan were among those out in the year-ending loss against the Colts.

And unlike Sunday’s game against New Orleans, this is a must win. Yes, it’s possible for the Titans to get the final wild card spot even if they lose to the Texans, but that would require another Steelers’ loss against the nothing to play for AFC top seed Ravens and a Colts’ loss to the last place Jaguars. Expecting any more help than what the Titans have already gotten would be unwise.

This is the position the Titans have fought for all season long, battling back from a 2-4 start and a quarterback change to control their destiny. And now, for the third straight year the season comes down to one final game.

Win and you’re in.

It’s a scenario every single Titan would’ve signed up for at the beginning of the season, and it sure made it easy to move on quickly from Sunday’s loss.