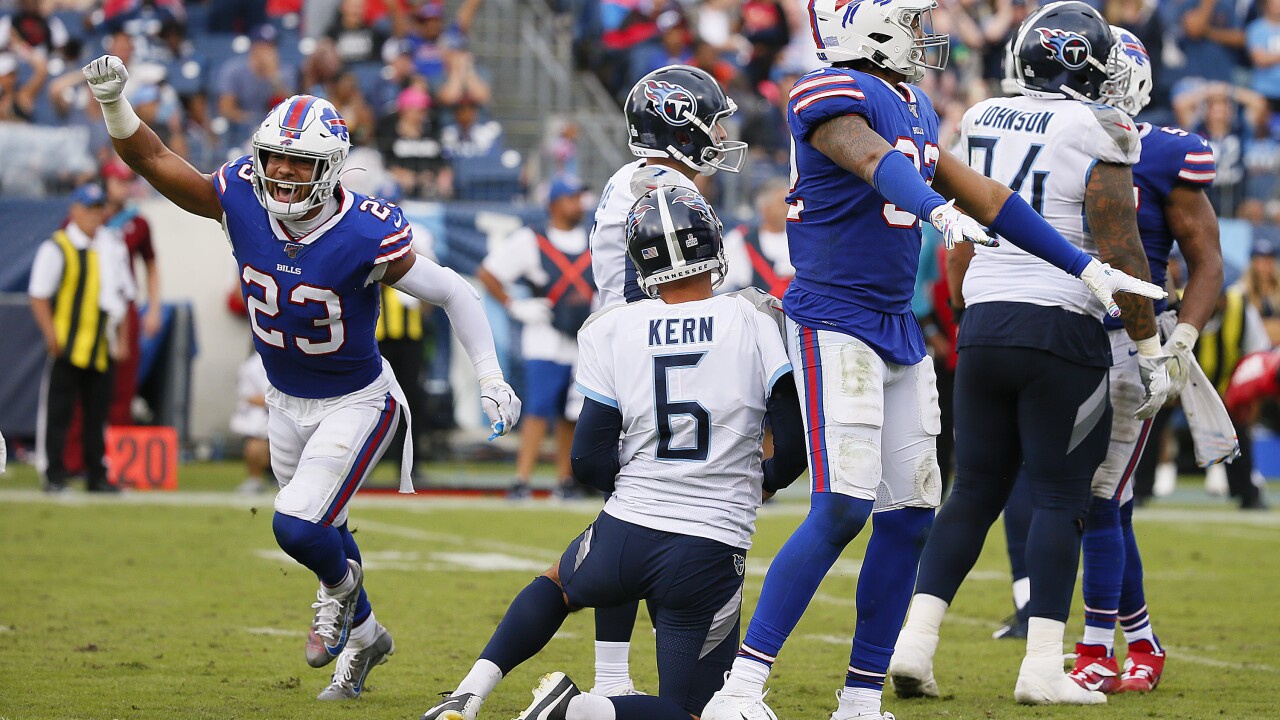 NASHVILLE, Tenn. (WTVF) — The way the Titans 14-7 loss to the Bills played out on Sunday would’ve been unbelievable if it wasn’t just so darn predictable.

The Titans are allergic to prosperity, seemingly incapable of building off one good performance with another one. And Sunday they let their fan base down one more time, with a third straight home loss in a game that was there for the taking.

This was a slugfest, as predicted, between two of the best defenses in the league. This was a game when you had to make the most of every opportunity. The Titans did not.

The offense put together just 252 total yards, yet did enough to score on multiple possessions. But Cairo Santos missed four field goals, the third one tipped at the line after the Titans had two apparent touchdowns called back because of penalties.

Derrick Henry’s apparent touchdown run early in the fourth quarter was called back by a holding penalty, and three plays later Marcus Mariota’s incredible effort to extend a play and fire back across his body to A.J. Brown for a touchdown was nullified because officials ruled the QB had crossed the line of scrimmage before throwing the ball. It was unclear whether Mariota actually had crossed the line on replay, but the call stood and the Titans were forced to use Santos but to no avail.

With the Titans unable to take control of the game, the tide turned just like it did last year in Buffalo when Nick Williams’ dropped TD pass helped the Bills seize momentum in a 13-12 win. Josh Allen hitting Duke Williams for a touchdown pass to cap Buffalo’s only real drive of the second half, much to the delight of the thousands of members of the Bills Mafia that attempted to drink Broadway dry this weekend before making their presence felt at Nissan Stadium.

The Titans attempted to answer, but Delanie Walker couldn’t hold on to a third down pass and Mike Vrabel inexplicably elected to send Santos out for a 53-yard field goal on fourth down. A preposterous decision considering the 14-7 deficit in a game in which the offense had struggled. Even if Santos made it, which was a big if, the Titans would have still had to score another touchdown in the game’s final seven minutes. The fact that the kicker was a replacement that was signed in August and had missed his first three kicks on the day just makes the decision all the more mystifying.

For all the just credit Vrabel got last year for being one of the bright, young coaches in the game, he’s blown it this season. His desire to be aggressive bordering on reckless has been replaced by haphazard game management that leaves you scratching your head.

While leading by 14 in Atlanta last week he elected to go for a fourth and one, and got stuffed, when a field goal would’ve effectively ended the game early in the fourth quarter. That decision didn’t end up costing him, but Sunday his coaching instincts talked him into a practically meaningless, low percentage field goal instead of going for it on what played out to be the Titans’ last good chance at a game-tying touchdown drive.

Perhaps it was an overreaction to the criticism from last week. Or maybe his gut feel just isn’t very good. But it is time to stop giving Vrabel a pass. More than 20 games into his tenure his decision making, and his team, need to be better.

They were supposed to graduate from good to great under Vrabel. Instead, they remain mired in the same old inconsistency that has plagued this franchise for years. Capable of beating anybody one week and capable of losing to anybody the next. That’s a recipe for another 8-8 or 9-7 season.

Taylor Lewan returned from his four-game suspension, but even the Pro Bowl left tackle couldn’t help fix the woeful offensive line. Lewan himself picked up a holding penalty on the game’s first play that negated a 26-yard pass to Walker. He also allowed one of five sacks to Mariota, which runs the Titans’ season total of sacks allowed to a whopping 22.

Bills defensive end Shaq Lawson called Lewan a “fake tough guy”, but he’s far from the problem on an offensive line where high priced free agent Rodger Saffold has been a turnstile in pass blocking and the team has been unable to settle on a right guard.

The result is that Henry has been unable to truly get going this season and Mariota’s performance continues to be up and down as he runs for his life from the pressure.

This is not the fault of a defense that’s given up just 76 points in five games. Or the fault of the league’s best punter, Brett Kern, who booted six more Sunday for an average of nearly 50 yards per kick while allowing just one to be returned. This is the problem of a team that can’t generate consistent offense in a league all about offense.

That’s why they must take advantage of every opportunity they get. The chances were there Sunday, but penalties and Santos’s missed kicks left points on the board, costing them a chance to win.

Santos probably needs to dust off his resume because it’s hard to imagine he will be kicking for this team when they take on the Broncos next week. But the rest of the team will be in Denver, looking to once again get this season back on track.

It’s a team capable of so much more than what we saw on Sunday. But the problems are also much bigger than just the need for a new kicker.