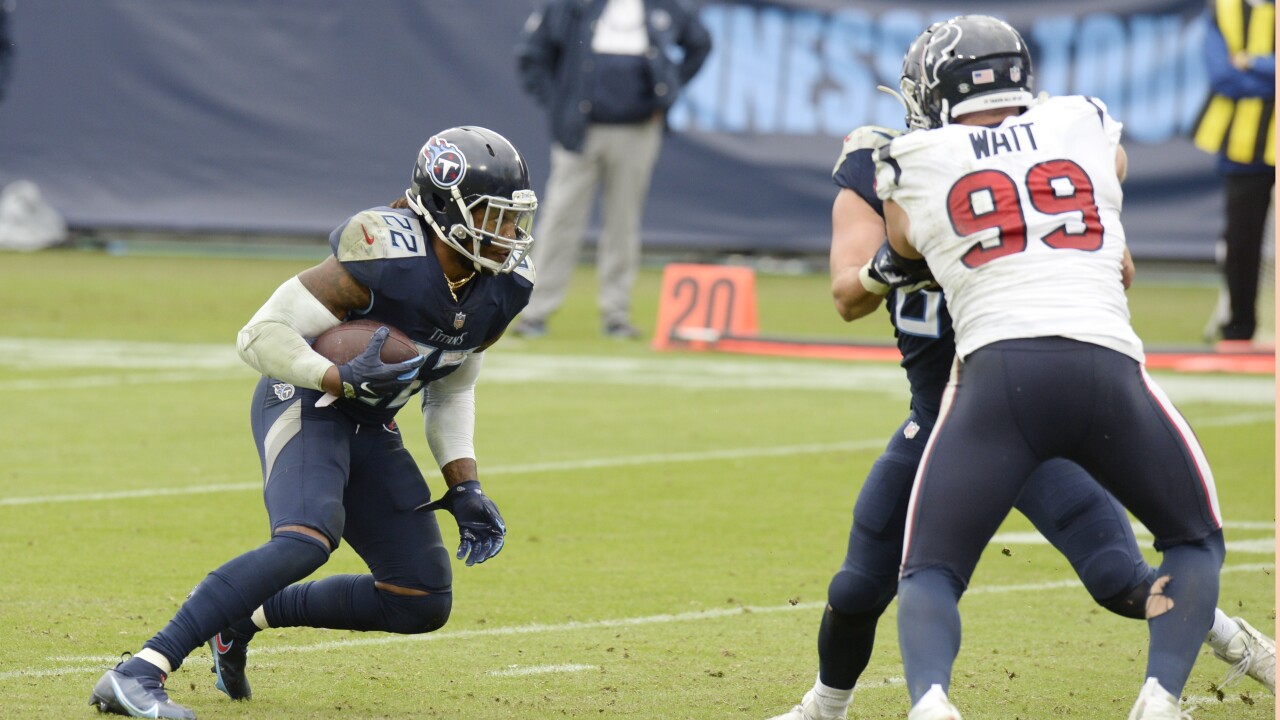 NASHVILLE, Tenn. (WTVF) — There they were in the corner of the north end zone at Nissan Stadium Sunday, the Titans’ sideline storming onto the field to celebrate with the offense after Derrick Henry battered his way in for a five-yard touchdown in overtime, giving the Titans a 42-36 win over the rival Texans.

About 10,000 fans stood in the stands and cheered. It was perhaps not the visual of an all-time great moment in franchise history, but it was a snapshot into this most unique season and a Titans’ team that just keeps finding ways to win, and is now 5-0 and off to its best start since it began the 2008 season 10-0.

Henry was a monster again. He ran for 212 yards on 22 carries, including a pair of touchdowns. The first was a 94-yard burst in which he got the offense out from beneath the shadow of its own goalpost and then ran by everyone at 21.6 miles per hour, the fourth fastest speed clocked in the NFL this year, to give the Titans a fourth quarter lead. The second seemed more representative of his 6’3, 247-pound frame as Henry took a direct snap in the Wildcat, or “Kingcat” in this case, and barreled his way through a couple of defenders for the game-winning score in OT, after A.J. Brown’s sensational catch in the corner of the end zone tied the game with just :04 left in regulation, and after Henry himself took a Ryan Tannehill dump off into the flat and raced 53 yards down the sideline to set the stage for that decisive moment.

Tannehill finished the day 30-41, throwing four more touchdowns to three different receivers. He improved to 12-4 in the regular season since taking over as the Titans’ starting quarterback in week seven last year, and he did it on a day when he had to battle through some rare adversity.

J.J. Watt stripped Tannehill of the ball on a sack late in the third quarter. The Texans recovered at the four-yard line and scored three plays later to take a 23-21 lead. Tannehill also threw just his second interception of the year, when he was picked off by a leaping Bradley Roby in the fourth quarter.

Those rare giveaways were part of an uncharacteristic second half meltdown that included a blocked field goal, a missed field goal and a defense that continued to struggle to get stops on third downs. But Tannehill directed yet another fourth quarter comeback, this time a 76-yard drive in 101 seconds inside the 2:00 warning. He hit eight of his nine passes on the drive to five different receivers, including Brown who hauled in his second touchdown to tie the game on the final play from scrimmage in regulation.

The Titans get the most out of their two superstars with Tannehill and Henry combining to be the first 350-yard passer and 200-yard rusher in the same game in NFL history. The four-year contracts they signed this offseason totaling $168 million are more than worth it, but this is not just a two-person team.

Anthony Firkser caught eight passes for a career-high 113 yards and a touchdown, picking up the slack once fellow tight end Jonnu Smith had to leave the game with an ankle injury. While Corey Davis remains on the COVID-19/Reserve list, Adam Humphries returned from his virus caused absence to grab six balls for 64 yards, including a 22-yard touchdown in the second quarter. And the offensive line attacked a vulnerable Houston front, even once star tackle Taylor Lewan left the game with what’s believed to be a torn ACL, paving the way for 263 rushing yards and a franchise record 601 total yards.

Jeffery Simmons had a huge sack to end a Houston fourth quarter drive without points, and also batted down the Texans’ two-point conversion attempt that would’ve put them up nine and put the game out of reach with less than 2:00 to play. And Stephen Gostkowski showed his resilience again, shaking off the two misses to bury the game-tying extra point with just a few seconds left.

This team just believes it’s going to win no matter what, and it should. The Titans have now won four of their five games this year by a total of 12 points, three of them coming on game-winning field goals inside the final 2:00, and Sunday’s coming on a touchdown on the opening drive of overtime.

They’ve won after a long lay-off and again Sunday, just five days after Tuesday’s beatdown of the preciously unbeaten Bills. They have won after great weeks of preparation and after barely being able to practice, utilizing the 53-man active roster and then some due to injuries and positive COVID-19 tests.

On Henry’s final run he dug deep, fighting his way through two defenders and into the end zone, an effort emblematic of the resolve of this entire team over the first six weeks of the season.

And there they were celebrating yet another wild ending that went their way. It’s a shame more fans weren’t able to be there to experience the rally in person, but the ones that were there will remember this game for a long time to come.

The rest of us should take a moment to savor what we’re watching. Henry and Tannehill are both having MVP-type starts to the season, surrounded by a locker room full of guys that have no fear or doubt. And that’s a magical combination of skill and determination that doesn’t come around very often.