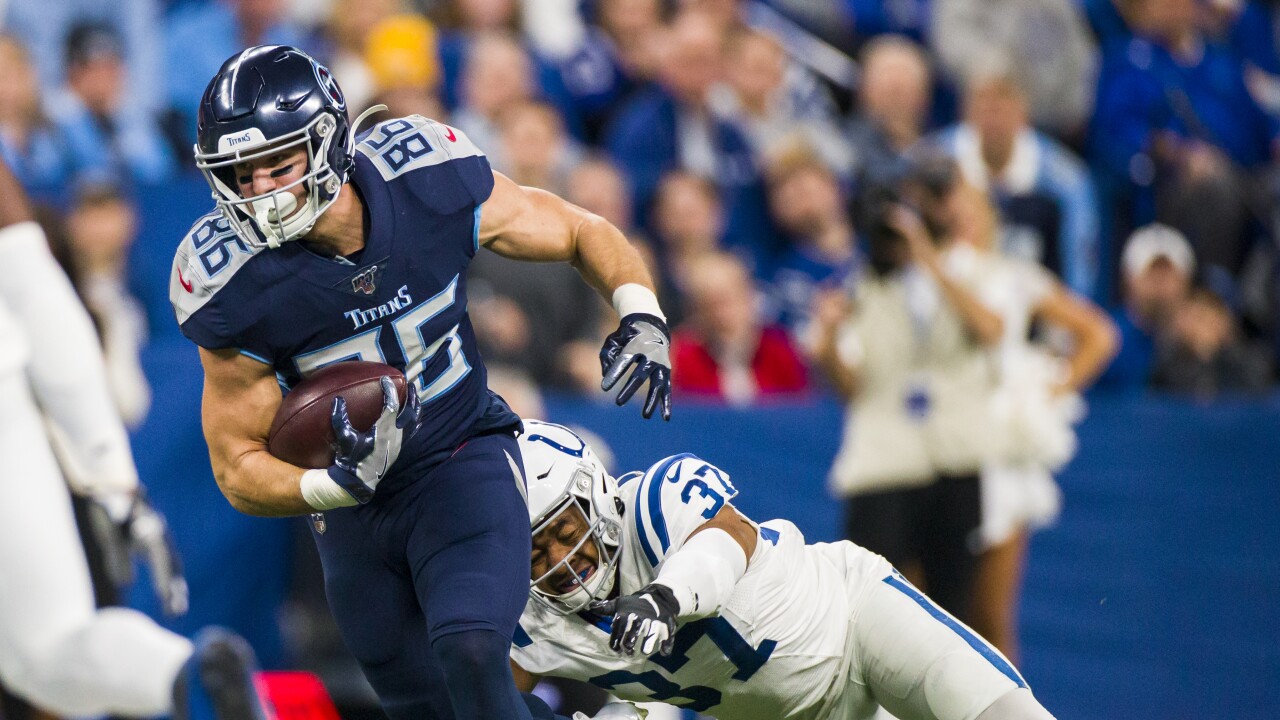 INDIANAPOLIS, Ind. (WTVF) — Trailing by 10 midway through the third quarter Sunday at Lucas Oil Stadium it appeared like the Titans were headed for their 20th loss in 23 games against the Colts. But then they ran off 24 unanswered points to win 31-17, sending a message that this is not the same old Titans.

This was the type of game this franchise has lost many times before. Either knocked out by an early barrage of punches or unable to make the plays to take advantage of the rare opportunities when they’ve perhaps been the better team. But this day was different.

“The biggest thing that changes a game is when you make those big plays,” Titans defensive tackle Jurrell Casey said after the win. “And that can (just) be one or two and change the whole outcome of the game. You saw that today. To get the win over the Colts and put us in the race for the number one spot in the division is big.”

Trailing by 10 and facing fourth and one in the third quarter, Mike Vrabel knew his team needed a spark. He rolled the dice and went for it, and got the jolt he was looking for when Derrick Henry broke free off the end of the line for a 13-yard touchdown.

Henry had a disastrous start to the game, fumbling on the very first play from scrimmage to set up a Colts touchdown. But he turned the page quickly and rewarded the Titans for sticking with him, registering his third straight game of 100 or more rushing yards with 149 on 26 carries.

After Henry’s run cut the deficit to three, Kevin Byard intercepted Jacoby Brissett on the first play of the ensuing possession. That set up a field goal that tied the game at 17-17 and further cemented Byard’s place as one of the best, if not the best, safeties in the league.

“We just have to make the most of our opportunities,” Byard said talking about his interception. “If we have to make big plays to get the game turned around, that’s what we’ve got to do.”

It looked like the Colts might regain the lead in the fourth quarter, but Dane Cruikshank blocked Adam Vinatieri’s field goal attempt. Tye Smith scooped up the loose ball and ran it back 63 yards for a touchdown that turned the tide for good.

It was the second field goal block of the game by the Titans, their fourth blocked kick in the last four games overall. Vrabel called the unit a weapon that can make game-changing plays. It has done that with Josh Kalu’s game-saving blocked field goal against the Chiefs and then Sunday’s momentum shifter.

“We consider (ourselves) a weapon,” Smith said. “We take pride in it. Every time we’re on field goal block we go out there and give it our all because we believe we can get to every field goal.”

It was also the type of big play that the Titans have searched for, but been unable to find for so long against the Colts. As Smith streaked towards the end zone with the go ahead score, silence overcame the stunned Lucas Oil Stadium crowd of 60,361 and you could almost sense the explosion of confidence on the Titans sideline.

They had said all week that the past didn’t matter and that this was a different team than the ones that had suffered all those losses against the Colts. But it’s one thing to say it and a totally different thing to go out and prove it in a building where you’ve won just once in 11 previous tries.

The Titans needed a play to prove to themselves, as much as anybody, that they could turn their luck against the horseshoe. And once they got it, they were determined not to look back.

Two plays later Logan Ryan picked off an errant Brissett pass and ran it back near midfield. Sensing the opportunity of the moment, the Titans took a shot down field on third and short and Ryan Tannehill hit Kalif Raymond for a beautiful, over-the-shoulder 40-yard touchdown grab.

The aggressive-minded Vrabel said it was the play call of the season by first year offensive coordinator Arthur Smith. Raymond said he knew the ball was coming his way and it was his chance to make a play for his team.

The touchdown helped the Titans top 30 points for the third straight week and put the game out of reach.

It was a breakthrough moment for the Titans and while stars like Henry, Byard and Ryan played their usual roles it was the afterthoughts on this roster the last time these two teams met back in week two that made the difference.

Imagine saying at the beginning of the season that the Titans would finally exercise their demons against the Colts, and it would be thanks to Tannehill, Raymond, Cruikshank and Smith.

But that’s where we are. Teams evolve as season’s go along. And while this team was unable to capitalize on its early season opportunities against the Colts and others, it is now.

This makes five wins in six games since making the move to Tannehill at quarterback, but Sunday’s win was the most meaningful. Don’t let anyone fool you, for the Titans to get to where they ultimately want to go, they had to beat the Colts.

Now they have. And they carry the confidence that comes from it into a critical stretch run with their AFC South title and playoff hopes very much intact.

“It’s funny, we can go back to the beginning of the year when we talked about (going from) good to great,” Byard said. “We feel like this time of year is when we make that jump, that transition. So coming up here and beating these guys on the road, which we haven’t done in two years, was definitely a big part of that. Now we just have to keep it going.”