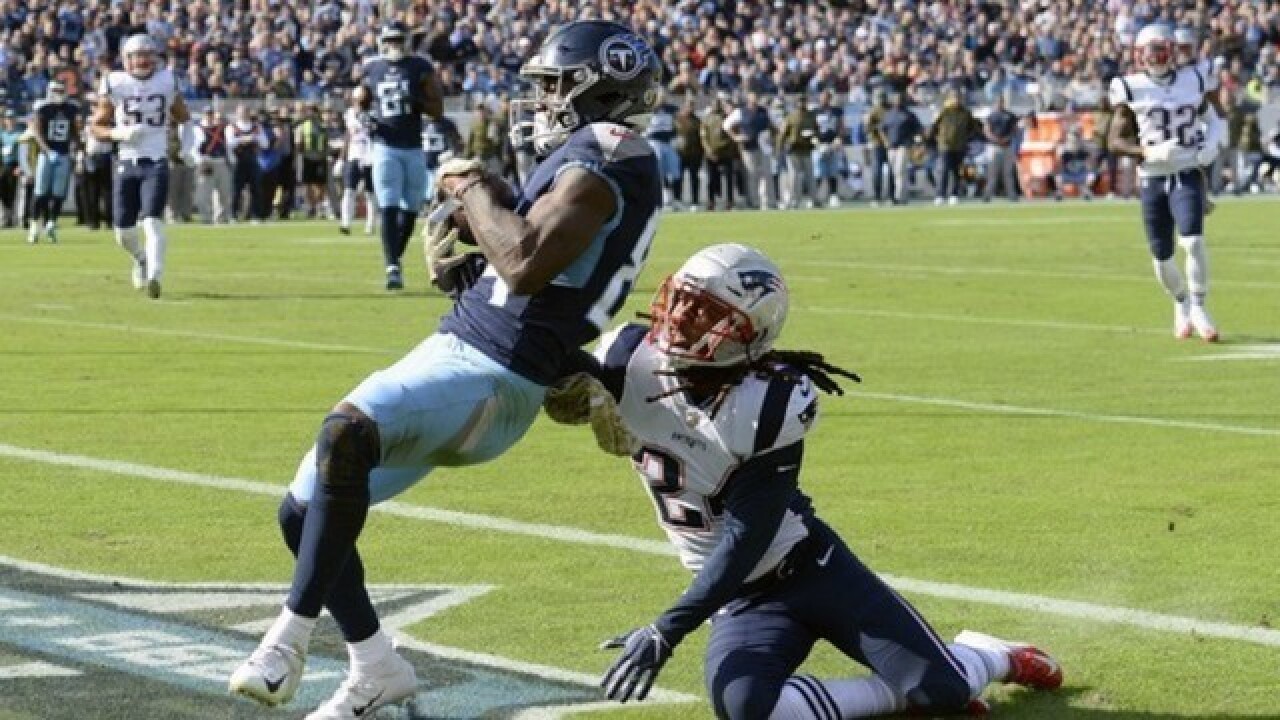 Copyright 2018 Scripps Media, Inc. All rights reserved. This material may not be published, broadcast, rewritten, or redistributed.
&lt;p&gt;Corey Davis catches a touchdown against the Patriots. The second-year wide receiver had seven receptions for 125 yards in the Titans' 34-10 win over New England.&lt;/p&gt;

Raise your hand if you saw that one coming. If you predicted a Titans team, many people counted out after a three-game losing streak in October, could come home on a short week of preparation and dismantle the defending AFC champion Patriots 34-10 in front of a loud and rowdy crowd at Nissan Stadium.

It was Tennessee's most complete effort of the season, eclipsing what was their best game of the season when they beat the Cowboys 28-14 Monday night in Dallas. But that was a game against another sub-.500 team when the Titans had 15 days to prepare. This was the Patriots, the gold standard of the AFC, six days later.

And the Titans dominated right from the start.

Darius Jennings returned the opening kickoff 58 yards into New England territory and things were off and running. Marcus Mariota hit Jonnu Smith for a short touchdown pass seven plays later and the Titans never looked back.

Mariota threw two TDs and Derrick Henry ran for two scores as the Titans posted a season-high 34 points against the Patriots, one point more than they scored in that three game October slide. In the two victories during this calendar week the Titans scored eight touchdowns, one more than the offense had total in the first seven weeks of the season.

Things are clicking. Finally. After being hampered by that nerve and hand injury early in the season, Mariota is healthy. He ditched the protective glove during the bye week and has played at an elite level the last two games, completing 70 percent of his passes for 468 yards, four touchdowns and zero interceptions.

Corey Davis is starting to look like the player Tennessee selected fifth overall in the 2016 NFL Draft. On Sunday he topped the century mark receiving for the second time in his career, catching seven balls for 125 yards and a spectacular touchdown in the team's 17 point first quarter.

But the Titans, not surprisingly considering all the ties between the two organizations, have taken a page out of the Patriots book with different players stepping up. Jennings had the biggest catch of the night in Dallas and started the game off with the kick return Sunday. Cameron Batson caught his first balls of the season against the Cowboys and had two more nice receptions vs. the Pats. Smith's five catches and two touchdowns in the last two games has provided a tight end option in the passing game that had been non-existent since Delanie Walker's season-ending injury in week one.

Dion Lewis has been productive as the team's primary tailback with 39 carries and six receptions in the two games this week. But the move has actually made Henry more productive as well. The former Heisman Trophy winner averaged five yards per carry in 17 attempts against Dallas and New England, scoring three touchdowns.

With the Titans finally scoring points, Dean Pees' defense has been able to be more aggressive, turning up the pressure on opposing quarterbacks forced to pass to get back in the game. The NFL's top scoring defense sacked Tom Brady three times Sunday, harassing  the three-time MVP and the Pats' potent offense into a season-low tying 10 points.

It was a dominant effort and it had to feel good for a Titans team that was eliminated from the playoffs by the Patriots 35-14 back in January. It also had to feel good for all the guys with New England ties. For Lewis, who led the Patriots in yards from scrimmage last year but was allowed to walk in free agency in the offseason. For Malcolm Butler, who was benched by Bill Belichick in the Super Bowl, but didn't allow a single catch Sunday. Throw in Josh Kline, Logan Ryan and Darius Kilgo as guys who took pleasure in beating their old team as well.

And definitely don't forget Mike Vrabel and Jon Robinson, who learned the "Patriots Way" during their time in New England as a player and personnel man, respectively. On Sunday the team they constructed took it to Belichick, Brady and company for one of the most impressive wins the two-tone blue have registered in some time.

By doing so the Titans delivered a message. They have their own way of doing things, and right now it's going pretty well with a healthy quarterback, an offense hitting its stride, a dominant defense and top notch special teams play.

In six days time the Titans went from a team fading from discussion to a team back in the AFC South race and playoff hunt. That's how quickly fortunes can change in the NFL.

And right now the Titans are a team nobody wants to play.