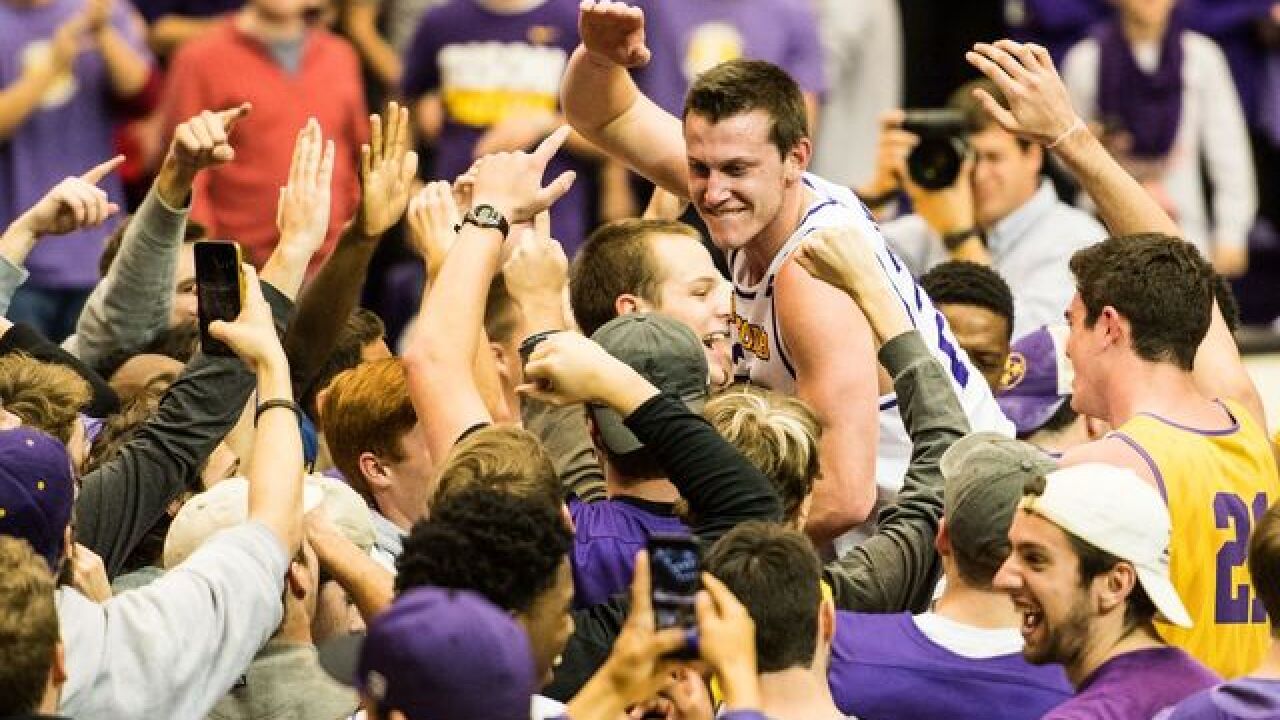 Copyright 2017 Scripps Media, Inc. All rights reserved. This material may not be published, broadcast, rewritten, or redistributed.
&lt;p&gt;Garrison Matthews celebrates with Lipscomb fans after the Bisons beat rival Belmont 69-54 Monday night to sweep the Battle of the Boulevard series for the first time since 2010.&lt;/p&gt;

A week ago Lipscomb got it's first win over Belmont in the Battle of the Boulevard since 2012, but had no chance to celebrate in a jam packed week that featured four games in eight days. Now the Bisons will be able to celebrate after a 69-54 win over their rival Monday night that gives them their first season sweep in the series since 2010.

Garrison Matthews shook off a knee injury suffered Saturday at Tennessee State to score a game-high 26 and Kenny Cooper chipped in a career-high 18 points as Lipscomb grabs neighborhood bragging rights for the next year after previously losing 11 straight games against the Bruins.

Buoyed by a frenzied home crowd at Allen Arena, the Bisons jumped to a quick 10-1 lead over the game's first few minutes. Belmont battled back to make it a 28-20 game at the half, but a quick 8-0 run to start the second half helped Lipscomb grab control for good.

It's a disappointing loss for a Belmont team that's now dropped four of it's past five games following a 4-1 start to the season. Kevin McClain scored 14 points and Mack Mercer chipped in 13 off the bench for Rick Byrd's team, which managed to shoot just 34 percent from the field and a woeful 6-31 from three-point range.

"They were better the whole way," Byrd said after the game. "There wasn't a stretch of six possessions where we were a better team the whole game."

Meanwhile, it's a monumental win for Lipscomb in Casey Alexander's fifth season at the helm of the program. The former Belmont star player and assistant coach has helped build the Bisons from the ground up, finishing second in the Atlantic Sun last season. He's modeled much of what his program off of what he learned under Byrd at Belmont, recruiting high character kids that can really shoot it. His Lipscomb teams have been known for their offense, but have made strides on the defensive end of the floor this season.

The two victories over Belmont validate all the work Alexander and the Bisons have done, proving what they can be at their best.

"What Belmont has done historically, as a division one team, (is what) we're trying to do, and that's why this win means so much," Alexander said. "But it also says a lot about where this team is right now and that's what I'm concerned with the most."

It also says what this team can be. A team that can accomplish what's never been done before in the division one era at Lipscomb.

Continue to play like they have the last two Mondays against their arch-rival against the likes of North Florida and USC Upstate in the A-Sun and the Bisons will have even more to celebrate in March, when they see their name unveiled in the NCAA Tournament bracket for the first time ever.