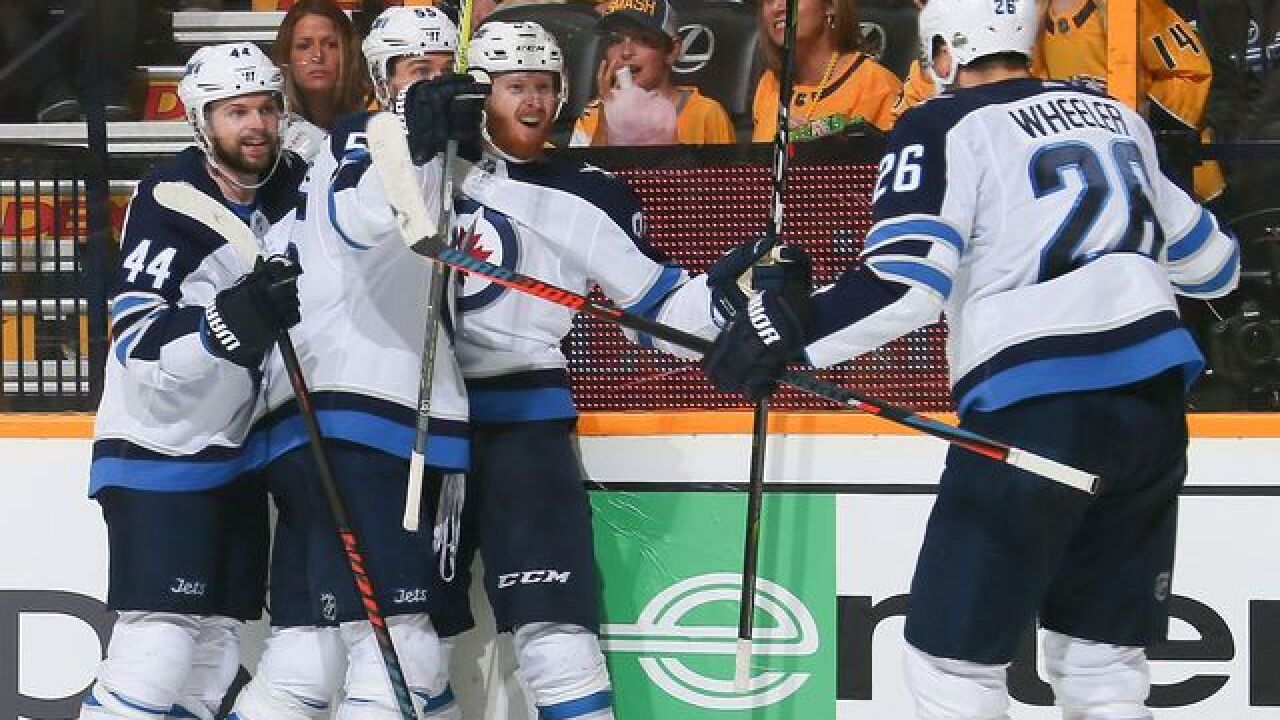 Copyright 2018 Scripps Media, Inc. All rights reserved. This material may not be published, broadcast, rewritten, or redistributed.
&lt;p&gt;The Jets scored four goals in the second period of game five Saturday night to defeat the Predators 6-2. Winnipeg now leads the second round series 3-2 and has a chance to close it out Monday night at home in game six. &lt;/p&gt;

When Lady Antebellum botched the words to the national anthem, you knew it was not Smashville’s night. Moments later the President’s Trophy winning Predators flew around the ice, cheered on heartily by a crowd determined to prove itself louder than its Winnipeg counterparts, looking to grab control of this second round series. But the night ended with the Jets celebrating and those fans filing quietly to the exits after a 6-2 rout.

Nashville dominated the first 20 minutes, controlling possession and outchancing the Jets 12-1. Just like the anthem, it was a pitch perfect start except for the fact they were unable to get anything past Jets goaltender Connor Hellebuyck.

And then, just like in game one, it was the Jets that struck first out of nowhere. Patrick Laine, perhaps awakened from his mini-slump with that final minute goal in game three, firing a wrister that bounced off Paul Stastny and in for a 1-0 lead.

The Predators came right back to tie the game just a few minutes later when Yannick Weber ripped a shot over Hellebuyck’s shoulder for his first playoff goal since 2011. But the celebration was short lived.

With the crowd still taunting Hellebuyck, Pekka Rinne was under siege. Mark Scheifele had a shot from the slot that forced one rebound and then another that found the stick of Kyle Connor and eventually the back of the net.

Then came another scrum in front of the net, that knocked the stick out of Rinne’s hands, and a blast from Dustin Byfuglien that made it 3-1. And then there was the turnover that Byfuglein gathered and passed to Blake Wheeler who found Connor wide open in the slot to make it 4-1.

Four goals in 9:17. After the Preds had controlled the first 27:00. And that’s the thing about the Jets, they can score in the blink of an eye. And they can get them in bunches.

Ryan Johansen’s shorthanded goal late in the second provided some hope, but any thoughts of a Preds comeback disappeared when Connor found Scheifele all alone in front of Rinne to make it 5-2 just 28 seconds into the third period.

By the time Matthieu Perreault shoveled in a puck from a crazy ricochet off the boards it was 6-2, Rinne was pulled and fans were at a loss for words as they headed out.

The Predators have met their equal in this series. Both teams are fast, both have high end scorers and elite goaltenders, but the Jets have an explosiveness the Preds can’t match. Connor, Laine, Scheifele, Stastny, and Wheeler have all taken turns giving the Preds’ defense fits.

Nashville shut the Winnipeg stars down with a near perfect effort in game four, but couldn’t sustain that level of play beyond the first period of game five. And the moment the attention to detail slipped, the Jets pounced, making the Preds pay for their miscues.

And that has been the case all series long. When you look at the numbers as a whole this has been a pretty even series in terms of chances and high danger opportunities, but the Jets have been better at making theirs count.

In game one Nashville outshot Winnipeg 48-19, but lost 4-1. The Predators put up three goals in the first period of game three, only to surrender four in the second period. On Saturday they controlled the first 20 minutes, yet it was a scoreless game before the Jets exploded.

Winnipeg has now outscored Nashville 22-14 in this series, while moving within one win of its first every trip to the Western Conference Final. It’s looking more and more like the aberration was the 2-1 loss in game four.

The Predators had to play nearly flawless to escape Winnipeg with that victory on Thursday, and that’s what it’s going to take once again Monday and again if they are able to force a game seven.

The Preds know the recipe to beating the Jets, but just like singing the anthem it’s easier said than done. And any mistake is on full display for all to see.