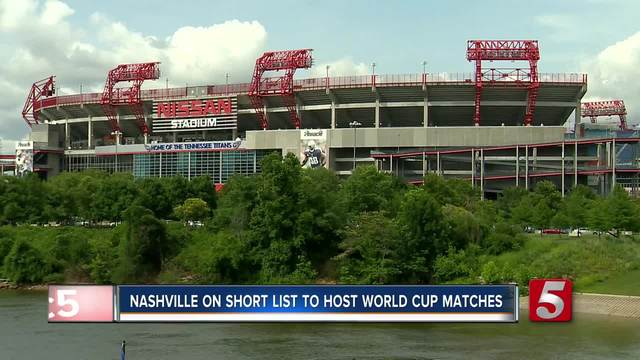 Nashville Mayor David Briley says the city “will be ready” to host the 2026 World Cup. 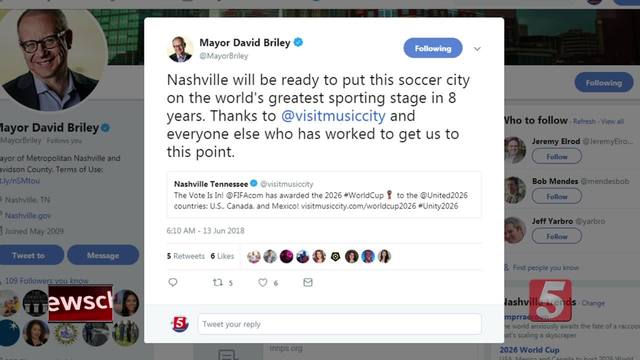 Nashville Mayor David Briley says the city “will be ready” to host the 2026 World Cup.

A joint North American bid with Mexico, Canada, and the United States was chosen to host the 2026 World Cup, following a FIFA association member vote in Moscow Wednesday .

The last time the US hosted a World Cup was in 1994, and Mexico in 1986. Canada has never previously hosted World Cup matches.

The North American bid has 23 potential host cities, one of which is Nashville. The proposal is to have it at Nissan Stadium.

“There will be 60 matches played in the United States. The field will expand to 48 teams in 2026, so I like our chances, we still have a lot of work to do over the next 18 months, those decisions will probably be made, and if I say anything to Nashville at large: the support Nashville has shown soccer has certainly made a difference," said Butch Spyridon, Nashville Convention & Visitors Corp. President & CEO.

If Nashville is chosen as a host city, it would happen around the same time as the CMA Music Festival, Bonnaroo Music and Arts Festival, and a potential Stanley Cup run.

City officials said that working with CMA has been great, they are cooperating with each other, and CMA has been a great partner to the city.

“Nashville will be ready to put this soccer city on the world's greatest sporting stage in 8 years,” Briley tweeted Wednesday morning.

While a plan had been put together, 2026 is a long time from 2018, and everything from infrastructure to what Nissan Stadium will look like and whether Nashville needs a new stadium needs to be looked at, but as it is now, officials say U.S. Soccer is a fan of Nissan Stadium.

"They love the stadium," Spyridon said. "They love how it functions as a soccer facility, so nobody has indicated we have do anything."

Nashville has also been selected as one of two finalists to host a training conference for the World Cup prior to the competition.

Lipscomb and Trevecca have been mentioned as possible practice facilities, and teh airport was a big part of the bidding process for Nashville.