Michigan makes most of second chance with CWS Finals berth 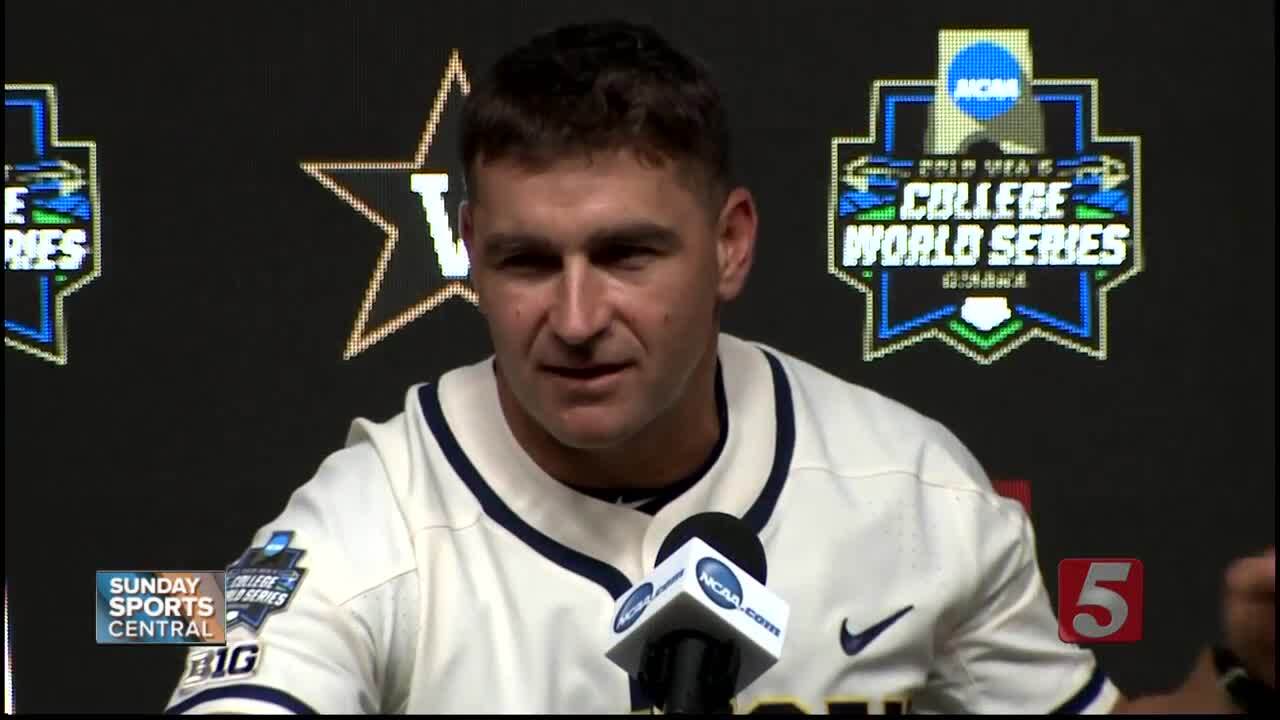 OMAHA, Neb. (WTVF) — Michigan will take the T.D. Ameritrade Park field Monday night for game one of the College World Series finals against Vanderbilt. It’s a position not even the Wolverines could’ve imagined they would be in just a month ago.

Back on May 23rd, in this very same ballpark, Michigan trailed Illinois in the bottom of the ninth in an elimination game at the Big Ten Tournament. The nation’s saves leader, Garrett Acton, was on the mound with two outs and had two strikes on Jordan Nwogu.

That was the moment Michigan found the magic that has fueled its postseason run. Nwogu belted a walk-off two run double off the center field wall, the first of three straight wins in the Big Ten Tournament that helped the Wolverines grab one of the final four at-large berths into the NCAA Tournament.

“We needed an organic moment to happen on the field, and we got it with that walk-off winner,” Michigan coach Erik Bakich said Sunday. “It did wonders for our confidence. It was a light-bulb moment to loosen up a little bit and have a little bit more fun with each other, immerse ourselves in these moments. And I've heard all these guys talk over the last few weeks of the postseason of just how grateful that they are to get a couple more games together, and they've made of most of it.”

Once into the tournament, the Wolverines have proven themselves to be one of the best teams in the country. They won the Corvallis Regional hosted by defending national champion Oregon State as a no. 3 seed. Then they went to no. 1 overall seed UCLA and took out the Bruins in the Super Regional to reach the CWS.

Michigan’s been even better in Omaha, riding stellar pitching to quiet the bats of Texas Tech (twice) and Florida State whole going 3-0 in bracket play. Sparked by first baseman Jimmy Kerr’s two home runs Friday, the maize and blue routed Texas Tech 15-3 to reach their first national championship matchup since it last won it all in 1962.

It’s a team that didn’t want to stop playing, and now will play until the final night of the season.

“Coming down to our last strike in that game against Illinois, Blake Nelson and I were seeing each other after the game and we were both pretty emotional because we were staring at the end of our careers right there,” Kerr said. “Him and I were both tearing up, hugging each other after that game because like we get another day together, and that kind of -- we've carried that perspective this whole way.”

Vanderbilt coach Tim Corbin sees a lot of similarities between this Michigan team and Vandy’s 2014 national champions. That team finished tied for sixth in the SEC regular season, but caught fire in the postseason, making it all the way to Omaha and eventually knocking off Virginia for the program’s first ever national title.

“I think sometimes teams, it takes them a while, 30, 40, 50 games to find their playing personality,” Corbin said. “In 2014 we did that. We did it after the SEC tournament. We had spurts of it, but we didn't develop that consistency that you need in order to finish something off until right about the same time Erik's team did.”

On paper Vanderbilt is a heavy favorite coming into this series. But games aren’t played on paper. And as is often the case in sports, the winners come tournament time aren’t always the best team, but rather the team that is playing the best at that moment.

“You develop into an elite team,” Corbin said. “And you might not have been an elite team in April, but you have the parts and the components to be an elite team if you find yourself in experiences that will allow you to do that, and we found ourselves in that situation in 2014, and Erik's team has certainly found that this year.”

The only question now is whether Michigan can keep it going for two more games and win the whole thing.