Miscues Catch Up With Titans in 40-17 Loss To Steelers 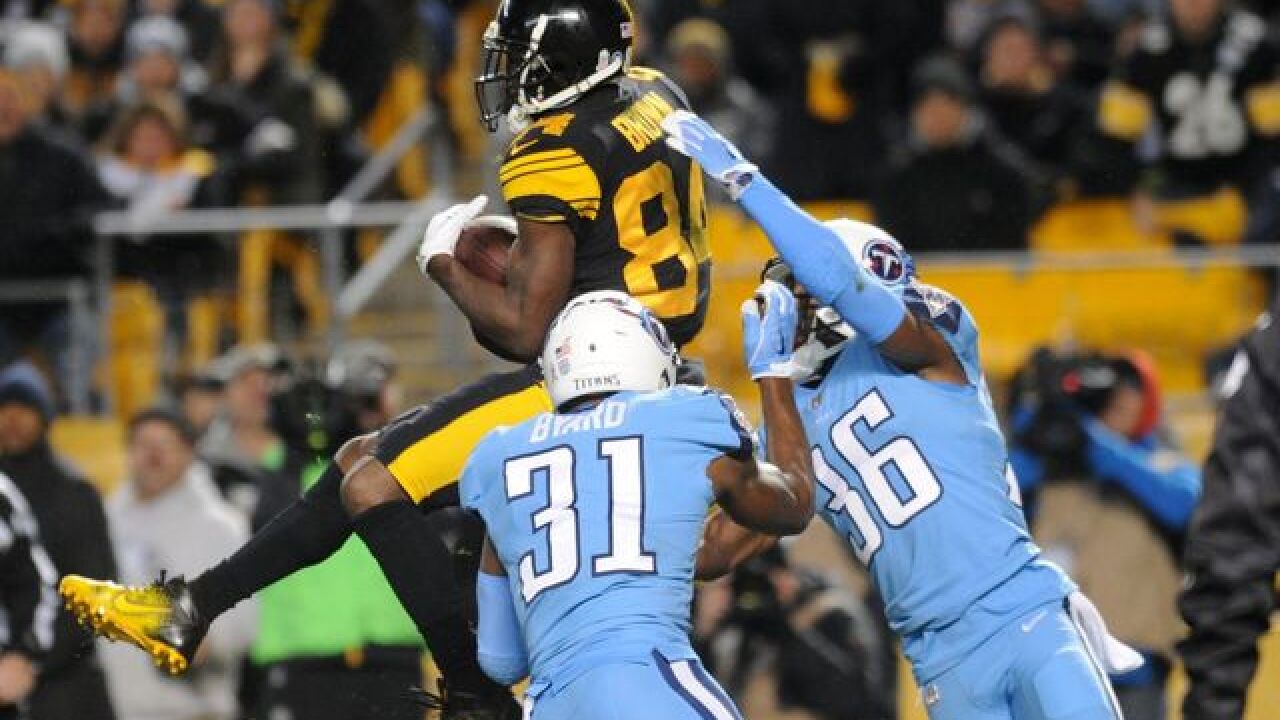 Copyright 2017 Scripps Media, Inc. All rights reserved. This material may not be published, broadcast, rewritten, or redistributed.
&lt;p&gt;Antonio Brown hauls in a 41-yard touchdown catch in the first quarter of the Steelers' 40-17 win over the Titans Thursday night in Pittsburgh. &lt;/p&gt;

In a primetime showdown between two first place teams the Titans found out they still have a ways to go to challenge the true contenders in the AFC, as they watched the Steelers pull away in the second half for a 40-17 win.

Don't call it stage fright, the Titans (6-4) didn't back down from one of the AFC's perennial powers even after falling behind quickly 10-0. But the mistakes that have plagued this team all season long finally buried them against a quality opponent.

"Disappointing loss, obviously. Made too many critical mistakes against a good football team," Titans coach Mike Mularkey said after the game. "It caught up to us there in the second half. We had a slow start, responded and kept coming back, and had opportunities to make it more of game but just failed to do so, and then the dam kind of broke in the second half with all of the mistakes.

One third quarter sequence perhaps best summed up the Titans' frustrating night. Trailing 16-14, the Titans appeared to have forced the Steelers into a field goal attempt following a third down stop, but Jurrell Casey was flagged for roughing the passer when he hit Ben Roethlisberger below the knees. The Steelers capitalized by scoring a touchdown on a 5-yard Big Ben toss to Antonio Brown.

Tennessee was poised to respond on the ensuing drive, but a wide open Delanie Walker dropped what would've been the easiest touchdown catch of his life in the end zone, forcing the Titans to settle for a field goal.

"It's hard to get that open, hard to get plays like that," Mularkey said. "That takes a little momentum away from you. That was a big play because we were still hanging in there with them at that point."

Instead of the Titans potentially taking a 21-19 lead, two miscues by Pro Bowlers led to an eight point swing and a 23-17 deficit. Given life, a historically prolific Steelers offense, that has struggled at times this season, exploded. Roethlisberger threw for 299 yards and four touchdowns as the veteran quarterback improved to a perfect 7-0 in his last seven primetime home games.

On the other side, Marcus Mariota showed spectacular flashes, rushing for his fourth touchdown of the season to make it a 10-7 game late in the first quarter and firing a beautiful 75-yard touchdown pass to Rishard Matthews on the first play of the third quarter. But he also threw a career-high four interceptions, giving him 10 for the year, one more than he had all of last season.

The first interception was a simple overthrow on what should've been a third down conversion. The second one came when Titan Coty Sensabaugh stepped inside Corey Davis to pick the ball off. Credit the defense for holding Pittsburgh to just two field goals on short fields or the final score could've been even worse.

"Those are on me," Mariota said after the game. "When it comes down to it, I'm the one who makes the decision to throw it and those were just bad decisions."

Mariota's final two picks came in the fourth quarter as he forced throws trying desperately to will the Titans back into the game.

But this wasn't all on the third-year franchise quarterback. The Titans running game managed just 52 yards on 21 carries, and the offensive line's struggles again stretched into the passing game as they allowed five more sacks. Mariota's now been sacked nine times over the past two games after being sacked just eight times through the first eight weeks of the season.

Defensively, a secondary that has been a bright spot in recent weeks proved to be no match for the league's top receiver. Antonio Brown catching 10 of Roethlisberger's 30 completions for 144 yards and three touchdowns, including a highlight reel TD catch off his helmet to help put the game away in the fourth quarter.

Throw in a blocked field goal and it's easy to see how this game got away from the Titans. They aren't 23 points worse than the Steelers, but the issues that they somehow grinded through on the way to six wins in nine games became overwhelming Thursday night, and now Tennessee sits looking up at Jacksonville in the AFC South.

All is not lost because the Titans still sit in the AFC's first wild card position and should be favored in their next four games, but they looked far from a playoff team on this cold night at Heinz Field.

"When you play teams that are this caliber, that are contenders that win week in and week out, that's the blueprint (of how you win)," Mariota said. "We're going to learn from it, we're going to get better from it and hopefully we'll see them again."

That rematch may come some time in January, but the Titans have a lot they have to clean up before then.