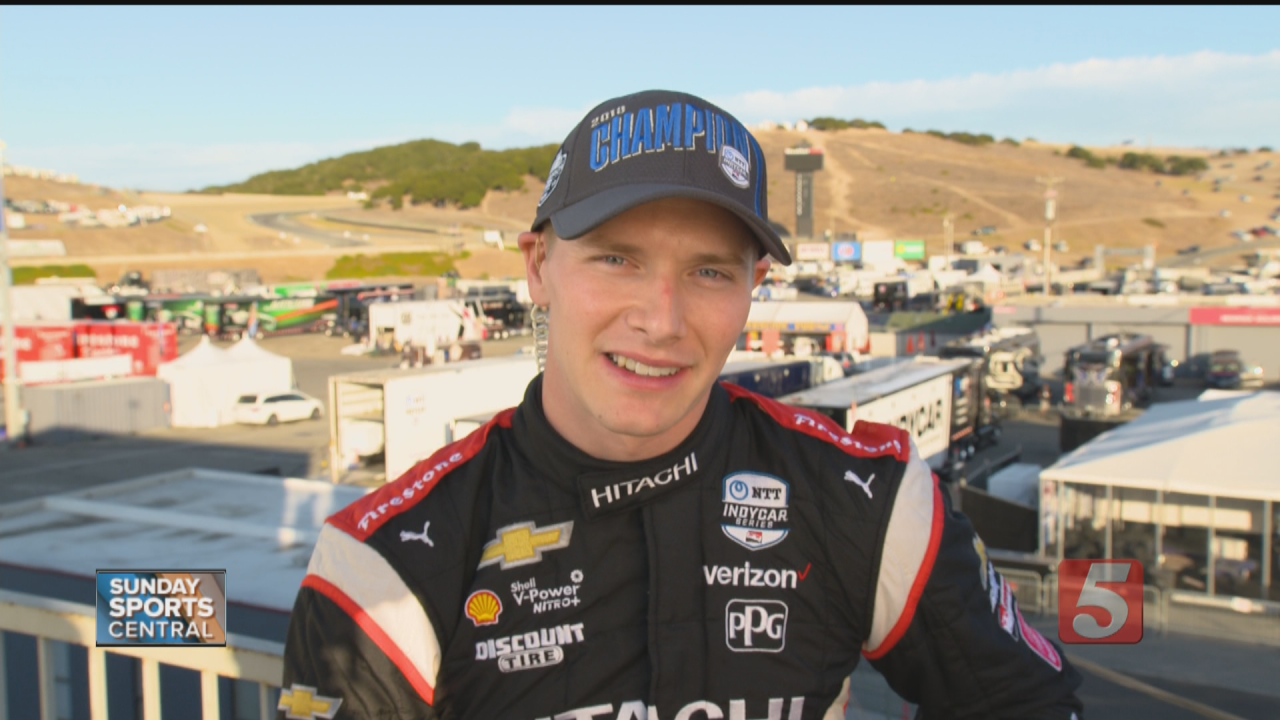 (WTVF) — It will be a year to remember for Josef Newgarden. That’s why the emotions poured out when he parked his car in the winner’s circle Sunday as IndyCar champion for the second time in three years.

Newgarden put his hands over his helmet, then had to wipe tears away from his eyes as he got out of his No. 2 car. It was an outpouring of emotion from the 28-year-old Hendersonville native that we did not see two years ago when he broke through as IndyCar’s champion in his first season with Team Penske.

“A lot more emotion,” Newgarden said via satellite on Newschannel 5’s Sunday Sports Central. “I don’t know why, but today it really hit me when I came into the pits, saw my team. I kept hearing from people that it’s harder to win a second championship than it is the first, and I think in a lot of ways they’re right. Today just felt so pressure packed, and we’ve had such a good year to get to this point, and I just kept thinking about what could go wrong today. I just wanted to get here [and] get it done.”

There are reasons for that. For starters, Newgarden’s planning a wedding with his fiancé for later this year. He moved back to Nashville, where he is building a house, and hopes to brand himself even more as “Nashville’s driver.” A boots wearing, country music listening, Predators hockey fan.

But Sunday’s title-clinching eighth place finish at the Grand Prix of Monterey was what he had been working on all year.

It started with a win in the season’s opening race at the St. Petersburg Grand Prix and continued with three more victories, giving him a series high four wins on the year. He had a target on him as 2017 champion and the early points leader pretty much all season, but still managed to navigate his way to the year end winner’s circle.

“Right from the jump we knew we’d been in position for this thing,” Newgarden said. “All year [we were] trying to build up a points gap that allowed us to control our fate today. But all those scenarios of what could go wrong, what kind of wreck you could get into that may not be your fault, what could break. I think the unknown was weighing on my mind. At the end of the day everything lined up just how we needed it to and we were able to finish it off right.”

Newgarden also managed his year of success while undergoing dental work to fix jaw and teeth problems he’s had since he was a kid. He had been having issues with his jaw locking up when he wore his racing helmet for extended periods of time, meaning at times it would lock up on him for an entire race weekend. Finally, he thought, I have to fix this issue.

So he got reverse braces at the start of the year to help correct the problem, hopefully for good. Just another obstacle in a racing season that was as rewarding as any Newgarden has had.

“It’s been tough,” Newgarden said. "There’s been so many things going on it’s been difficult to keep racing at the forefront and really, the truth of it is, racing is the most important thing for the year. That has to be the priority. I’m happy that with everything else going on around us in our personal lives we’ve been able to make the most of this year professionally.”

Sunday’s race was not typical for Newgarden. Known as one of IndyCar’s more aggressive drivers, Newgarden played it safe. With a 41-point lead over second place Alexander Rossi entering the day his goal was to keep the 27 car in his sights and stay out of trouble. That’s exactly what Newgarden did while navigating the southern California road course.

“You have an opportunity to win a race every week,” Newgarden said. “But you do not have an opportunity to win a championship every week. It takes a whole year, there’s a lot that goes into it, everything has to come together all season to give you that chance. And so for us it wasn’t about winning the race. We just needed to focus on our points advantage and getting the championship wrapped up. When you get that opportunity, you don’t know when you’re ever going to get it again.”

With so much going on this year, it could’ve easily been understood if Newgarden did not live up to the lofty expectations he’s established with Team Penske. Instead he continued to thrive.

That’s why this championship means just a little bit more than the first one did for Newgarden. And he hopes there’s many more to come.

“I don’t know how we fit everything in this year, to be honest with you,” Newgarden admitted with a chuckle. “But it’s all been great, great things. I’ve had an amazing life with a lot of great people around me, and been able to work in a very fun industry. I’m hoping next year if we unload the plate a little bit it will make another championship run even easier on us.”