Column: Titans Tested In & Out Of Opening Day Loss 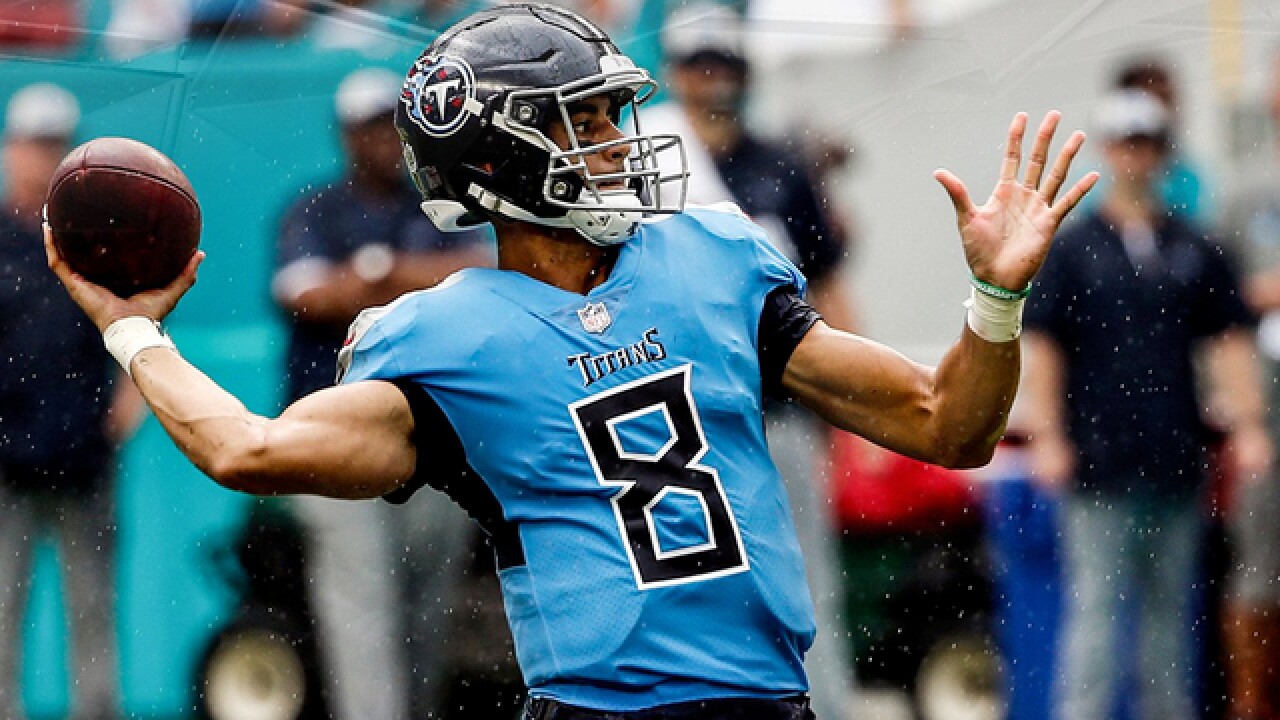 Copyright 2018 Scripps Media, Inc. All rights reserved. This material may not be published, broadcast, rewritten, or redistributed.
&lt;p&gt;Photo Courtesy: Tennessee Titans on Twitter&lt;/p&gt;

The Titans looked for a bright start to the Mike Vrabel era Sunday in Miami. Unfortunately, Mother Nature planted a dark cloud over Hard Rock Stadium that helped spoil the start of a much-anticipated season with a 27-20 loss to the Dolphins on what was literally the longest afternoon in NFL history.

The game lasted seven hours and eight minutes, disrupted twice by lightning delays of two hours. It was the longest recorded game since the NFL/AFL merger back in 1960, and it ended with perhaps even more questions about what this Titans team can be under their new head coach.

The game started with promise. The Titans coming out no-huddle and driving 37 yards on nine plays to set up a Ryan Succop field goal. The second drive was equally impressive, with Marcus Mariota delivering a 35-yard toss to stout tight end Luke Stocker before the drive stalled out inside the five-yard line with Corey Davis stopped just outside the one on fourth and goal.

What should have been either a 6-0 or 10-0 lead quickly turned into a deficit with the Dolphins driving 98 yards on 12 plays, capped by Ryan Tannehill’s touchdown pass to Kenny Stills.

That’s when things got weird. With sunshine covering the field lightning was detected with in a mile of the stadium, forcing the teams to retreat to their locker rooms. Two hours later play resumed with three Titans runs, three Dolphins timeouts, a punt and a kneel down before the game hit an abbreviated halftime.

The second half began with Mariota taking a hit from Dolphins defensive end William Hayes after he handed the ball off to Derrick Henry on a zone read play. It was a legal hit by Hayes because Mariota was considered a runner on the play, but the franchise QB landed awkwardly on his elbow. After receiving treatment on the field, Mariota returned to the game but struggled, throwing two costly interceptions before being pulled.

To make matters worse, Pro Bowl left tackle Taylor Lewan suffered a concussion on a crackback block on one of the interception returns, joining Jack Conklin on the bench and leaving the Titans without either one of their star tackles as the skies opened up again and lightning forced another delay.

The Titans defense forced four three and outs, stood tall repeatedly in the red zone and got interceptions by new secondary starters Malcolm Butler and Kenny Vaccaro. But they were also gashed on the ground, surrendering 120 rushing yards, and gave up a back-breaking 75-yard touchdown pass when Stills beat Butler on a deep post early in the fourth quarter.

Any hope the Titans had at pulling out a miraculous win amidst all the chaos was dashed when Blaine Gabbert was intercepted by Reshad Jones. It was the third interception thrown by Tennessee, the second one picked off by Jones, and his return back to the Titans’ 12-yard line set up a field goal that all but iced the game.

But there was still more pain to come on this doomsday opening day. Star tight end Delanie Walker suffered what appeared to be a gruesome leg injury on a late game catch. The team’s leading receiver over the past five seasons was just awarded with a contract extension during the preseason, but very well may have had his season end in week one after being carted off the field.

The mounting injuries are of far more concern for the Titans than the week one loss. How can they replace Walker? When will Lewan and Conklin be back up front? And will Mariota be okay and able to grow within Matt LaFleur’s offense in the way so many have expected, but we are yet to see.

The defense has its own injury concerns with Derrick Morgan gutting through week one, rookie draft picks Rashaan Evans and Harold Landry out and last year’s first round pick Adoree’ Jackson forced to leave the game as well.

There are a lot of questions and few answers as the Titans now stare at a brutal stretch of schedule that includes consecutive division games, against the Texans and at Jacksonville, before a home date against the reigning Super Bowl champion Eagles.

But most importantly Vrabel’s Titans still must establish their identity. It’s a make up that got severely tested in an opener that may have an impact that lasts even longer than the game itself.