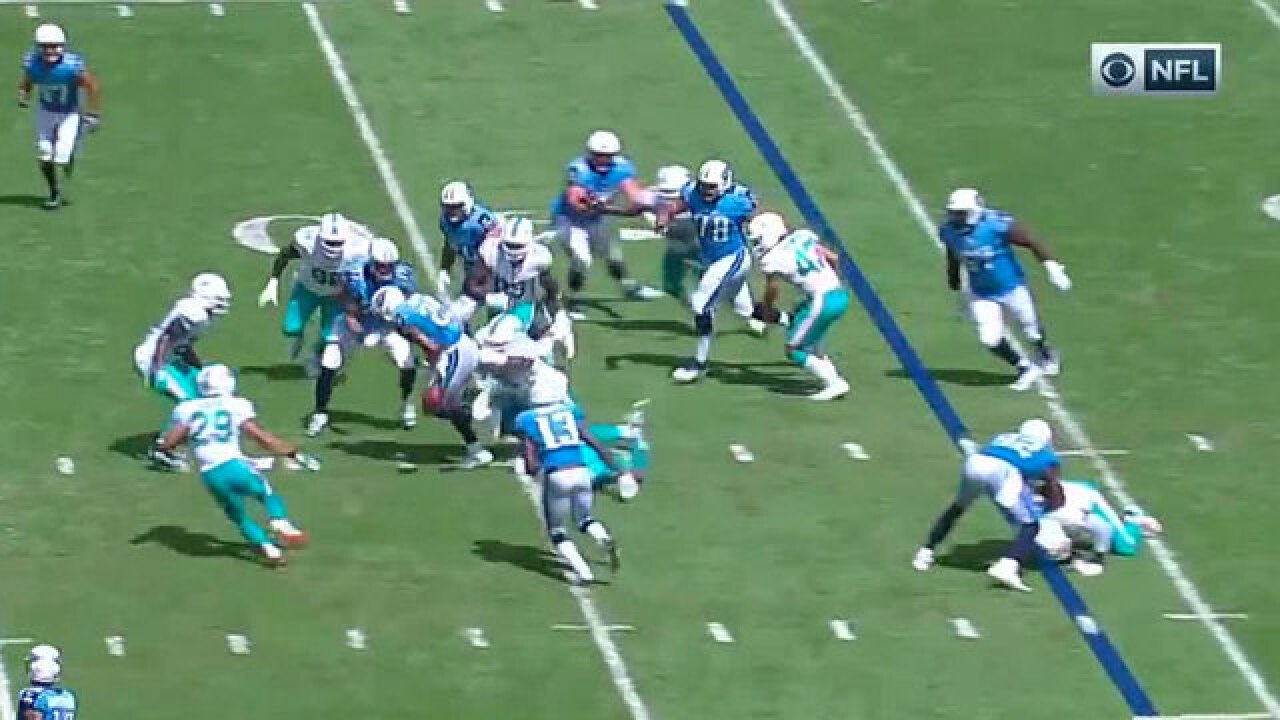 For much of the day Sunday boos reigned down on the Hard Rock Stadium turf, directed at the stagnant offense of the home team. But the erratic Jay Cutler and the Dolphins managed to do just enough offensively to beat the equally inept Titans 16-10.

While chants of "we want (Matt) Moore" aren't exactly a strong endorsement of Cutler or the direction of Adam Gase's Miami offense in the eyes of their fanbase, Cutler's six-yard touchdown pass to Jarvis Landry early in the fourth quarter proved to be the difference in a game that won't soon be made into a movie or offensive tutorial video.

What was clear is that the Titans need Marcus Mariota back in a hurry. The third-year quarterback missed the game due to a hamstring injury suffered in last week's loss in Houston and Matt Cassel struggled, throwing for just 141 yards on 21-32 passing.

The Titans offense managed just one third quarter touchdown march, capped by Cassel's 11-yard scoring strike to Phillip Supernaw. But two costly turnovers essentially gifted the Dolphins 10 points and proved to be the difference in the game.

With Mariota out and the defense responding with a spirited effort after surrendering 57 points in Houston last week, the Titans looked to employ a physical running game to control possession and field position and make life easy on Cassel. They seemed to be in control early until DeMarco Murray coughed up a fumble in Tennessee territory that led to a Miami field goal for the first points of the day.

The big turning point came on the next series when Cassel's apparent touchdown bomb to Delanie Walker was overturned by an offensive pass interference penalty.

Just two plays later blitzing linebacker Kiko Alonso smacked Cassel as he was beginning his windup and the ball sprung free to the turf ahead of the line of scrimmage. As seemingly everyone on the play stopped, thinking it was an incomplete pass, Reshad Jones scooped up the ball and trotted in for a touchdown.

Replay upheld the call on the field, saying it was not conclusive that Cassel had started his throwing motion, but the Titans believe the play should've been dead anyway.

"It was another close play, it could have gone either way," an exasperated Mularkey said after the game. "Where the problem comes in is our guys said they heard a whistle and stopped. I've got linemen telling me they heard it, and I know New York has said there wasn't a whistle, but I think I'm going to believe my offensive linemen over anyone in New York."

In the span of two plays the Titans went from  a potential 7-3 lead to facing a 10-0 deficit. Gameplan out the window.

"It was a huge turn of emotion," Cassel said. "But you have to be good enough to overcome that adversity."

Playing from behind, the offense was never able to find a rhythm. The running game never got on track, getting just 20 rushes on the day. And an offensive line that was charged with setting the tone for the game also surrendered six sacks as Dolphins pass rushers harassed Cassel all day.

The Titans finished a woeful 2-13 on third downs en route to a season-low 188 total yards. Numbers that they know will not get it done week in and week out.

So the Titans leave south Florida at 2-3 and now looking up at the Jaguars in the AFC South standings. And while frustrated, they remain resolved.

There are still 11 games left on the schedule starting with a big divisional showdown against the Colts on Monday Night Football next week, which is plenty of time to make this season what they want it to be.

"We'll bounce back," Murray said. "We gave one away today and that's unfortunate, but we've got a big one next week and we'll go back and get ready for that one."