Layman: 5 Things To Know About Titans 27-10 Win Over Eagles 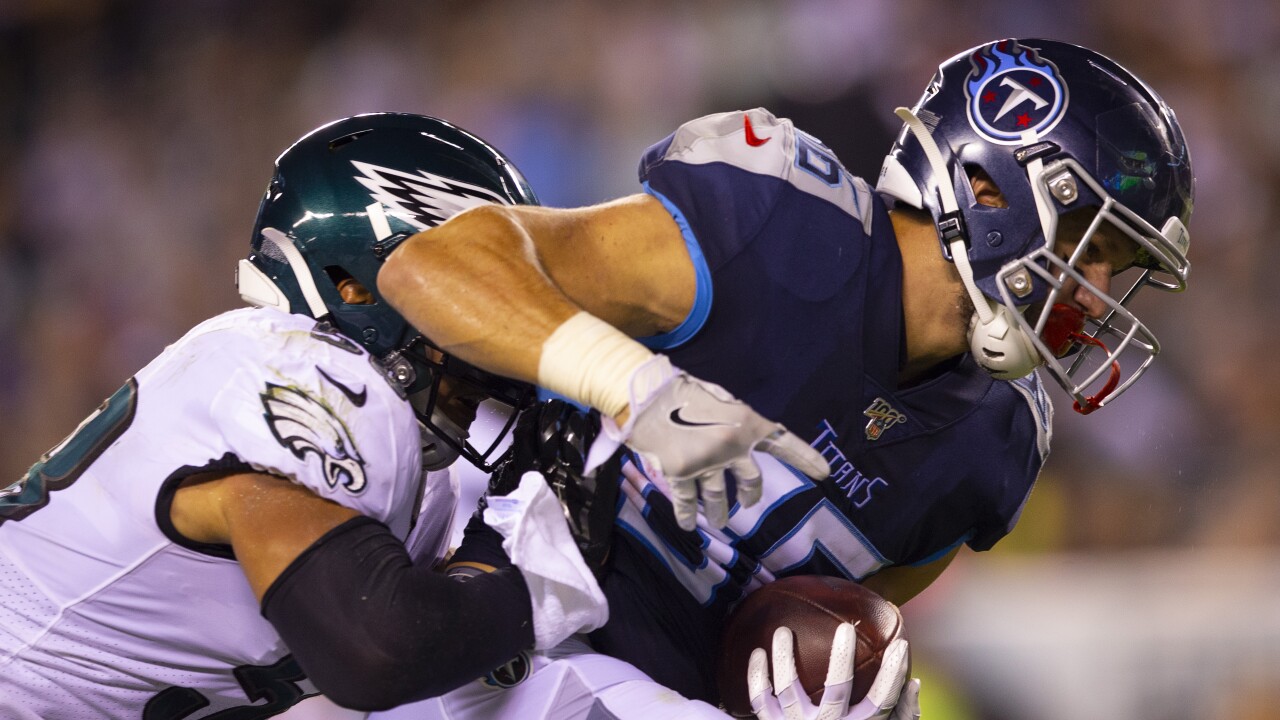 PHILADELPHIA, Penn. (WTVF) — The Titans beat the Eagles 27-10 Thursday night to open the preseason in Philadelphia. Here are five takeaways from their first live action of the year.

The Titans forced a three and out from the Eagles on the opening series of the game, despite playing without starters like Jurrell Casey, Cameron Wake and Harold Landry.

The defense dominated much of the night, no matter who was in the game, allowing just 227 yards and 10 first downs.

Marcus Mariota and the starters on offense got their first and only crack at the ball following a 24-yard punt return from Adam Humphries, and we saw exactly what the new, prize free agent is capable of.

Mariota hit Humphries four times, including twice on third downs before the drive eventually ended on downs when Mike Vrabel elected to go for it on fourth and seven from the Philly 23.

Despite not having Derrick Henry, Delanie Walker or Corey Davis available, Mariota looked confident running the offense in his limited work.

But there will be some Titans fans wanting to open up a quarterback controversy after new backup Ryan Tannehill came into the game and torched the Eagles second and third teams, going 12-16 for 130 yards and two touchdowns.

Tannehill led the Titans on 89 and 87-yard scoring drives in his four series. The first ended on a one-yard TD toss to MyCole Pruitt in which the QB expertly went through his progression from one side of the field to the other to find his big tight end.

He hit another tight end, Anthony Firkser, on a beautiful 23-yard TD down the middle late in the first half.

The Titans have been adamant that Mariota is their starting quarterback, but it’s undeniable that Tannehill is a big upgrade at backup. And there may not be much of a drop off in play if something happens to Mariota.

Several of the training camp surprise performers had good nights against the Eagles.

Jeremy McNichols busted free as he has on multiple occasions in camp for a 37-yard run that helped set up the Titans first touchdown. Fellow running back Dalyn Dawkins continued run hard. And Firkser rebounded from a few uncharacteristic drops over the first couple weeks of practice to make two receptions including the TD.

But the star of the night was Kalif Raymond. The fourth-year wide out continues to make the most of his opportunities. He had a game-high six catches for 80 yards Thursday night. He also had a kickoff return for 24 yards and also averaged 11.7 yards on three punt returns.

Raymond has shown impressive versatility and, most impressively, continues to get open for his quarterbacks. He’s gone from someone seen as a long shot to make the 53-man roster to someone very much in the mix.

While Raymond’s stock is soaring, third-year receiver Taywan Taylor is struggling. The former third round pick has gotten lost in the shuffle at times during camp, and had two costly drops against the Eagles.

One came on third down and ended a Titans’ possession. The other came on a deep ball attempt in which Tannehill underthrew an open Taylor, but the former Western Kentucky standout failed to make a good effort on the football.

Taylor needs to make something good happen, for his own confidence and to show his coaches that he’s still progressing from the receiver that has shown the ability to make explosive plays, but has been too inconsistent over his first two years.

The talent is there for him to be a key contributor, but Taylor’s roster spot is no longer certain with guys like Raymond and Darius Jennings coming on.

Vrabel said the biggest thing he was looking for out of his team in the first live game of the year was that they would be operational sound and play a clean game.

While both the offense and defense were effective, and new offensive coordinator Arthur Smith seemed to quickly signal in plays to get the offense lined up, there were several miscues that Vrabel will need to get cleaned up.

The Titans were flagged for 12 penalties for a whopping 117 yards vs. the Eagles. That’s too much laundry on the field for any head coach to stomach, but it’s especially troubling for a Titans team that was the least penalized team in the NFL last season.

Unlike holding and pass interference calls, false starts, delay of games and roughing the quarterback penalties are mental mistakes. They need to be eliminated by the time games start to count.