Layman: Luck Returns With A Vengeance As Colts Pound Titans 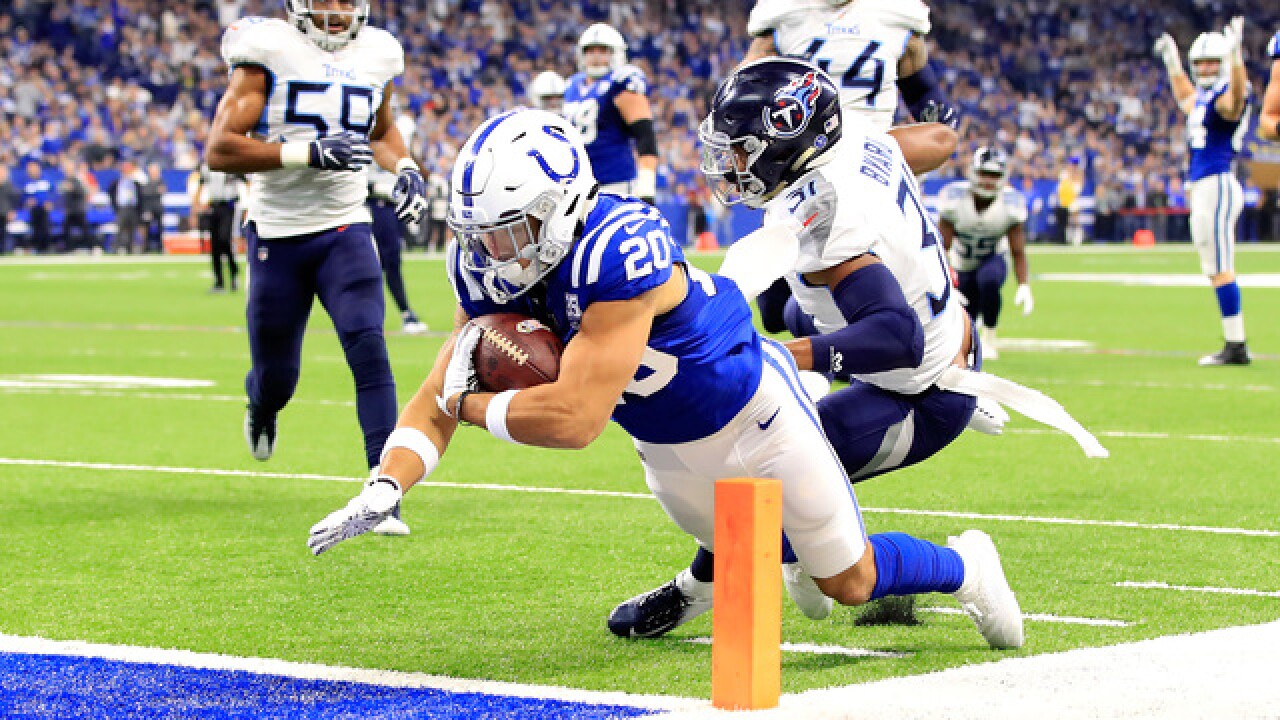 Copyright 2018 Scripps Media, Inc. All rights reserved. This material may not be published, broadcast, rewritten, or redistributed.
&lt;p&gt;INDIANAPOLIS, IN - NOVEMBER 18: Jordan Wilkins #20 of the Indianapolis Colts runs the ball for a touch down in the game against the Tennessee Titans at Lucas Oil Stadium on November 18, 2018 in Indianapolis, Indiana. (Photo by Andy Lyons/Getty Images)&lt;/p&gt;

Peyton Manning was in the building Sunday to watch as his favorite target, Reggie Wayne, had his name added to the Colts’ Ring of Honor. But it was Indianapolis’s current dynamic passing duo that was on full display against the Titans as Andrew Luck and T.Y. Hilton carved up the league’s top scoring defense in a 38-10 romp.

Let’s start with this: Luck is back. Concerns over his surgically repaired shoulder have all but disappeared as he’s thrown 29 touchdowns through 10 games, including three more against a Titans team that was allowing just 16.8 points per game, but gave up 24 points in the first half Sunday.

“It was very surprising, I don’t think anybody expected this kind of outcome,” Titans cornerback Malcolm Butler said. “But this is what we got. Probably got outplayed. Probably got outcoached. They did a lot of things better than us.”

Luck completed 23 of his 29 passes for 297 yards. Nine of his completions went to Hilton, who amassed 155 yards receiving and two of those TDs.

A week after shutting down Tom Brady, Josh Gordon and the Pats, the Titans had no answers for Luck, Hilton and the Colts. An all too familiar feeling for those who know this series history.

“He was on fire, that’s as bad as it’s going to get,” said Adoree’ Jackson, who was victimized on most of those Hilton catches after all but shutting down Gordon by himself a week ago. “At the end of the day you’ve got to go back to the lab, go back to the film, see how they schemed us up, see what I can do better.”

Luck’s injury sidelined him for both Titans’ victories over Indianapolis last season, so Sunday’s win now makes him 10-0 lifetime against Tennessee. The win last season was the Titans’ only victory here at Lucas Oil Stadium in their 11 visits since it opened in 2008.

The Colts are now 17-3 against the Titans since 2008, 16-0 with Peyton Manning or Andrew Luck under center.

“We got our ass kicked,” Titans safety Kevin Byard said. “That’s not the way we wanted to play today. We’ve got those guys coming up on a few weeks, so we definitely have got to get this fixed so we can beat them the second time around.”

That’s dominance. It’s also the problem. Because Luck isn’t going anywhere. He’s just 29 years of age and the Colts have rebuilt this team around him with three first round draft picks on an offensive line that now hasn’t allowed a sack in four games and barely allowed him to get touched Sunday.

The Colts are running the football and as long as Luck has time he will dissect most NFL defenses. Boosted by first year coach Frank Reich’s quick strike system, he’s now thrown for 977 yards and 13 touchdowns against just one interception during Indy’s four-game winning streak, leading them from 1-5 back into the AFC South race.

Meanwhile, the Titans will once again have to answer questions about their quarterback. Marcus Mariota was sacked four times in the first half Sunday, leaving the game after suffering an elbow injury on the final one.

No details of Mariota’s injury or its severity were available after the game, but the injury concern once again returns for a QB that’s missed one full game and parts of three others this year.

It comes just when the Tennessee offense was seemingly finding its stride, putting up 28 and 34 points in wins over the Cowboys and Patriots. But the unit took a significant step backwards Sunday with Mariota and then Blaine Gabbert at the helm.

“There was a lot of things wrong today, in all three phases,” head coach Mike Vrabel said. “But we’re going to come back, keep fighting and do everything we can to get ready for Houston.”

The Titans now must regroup ahead of what essentially amounts to a must win game for this season’s divisional race. They now trail the Texans by two games in the AFC South with six games to play.

But whatever happens in Texas in eight days, the Titans need to figure out Indiana’s. They’ll see Luck and company again in week 17 and twice a season for the foreseeable future.

And as we saw Sunday, that’s a future that might not be so bright as long as no. 12 is healthy and has the horseshoe on the side of his helmet.