Tim Shaw never felt more alive than he did on a football field. He was a special teams star and NFL quality linebacker that played parts of seven seasons professionally before the devastating symptoms of ALS derailed his career and eventually forced his retirement. But Shaw hasn't let ALS prevent him from living his life or even making an impact on the field. 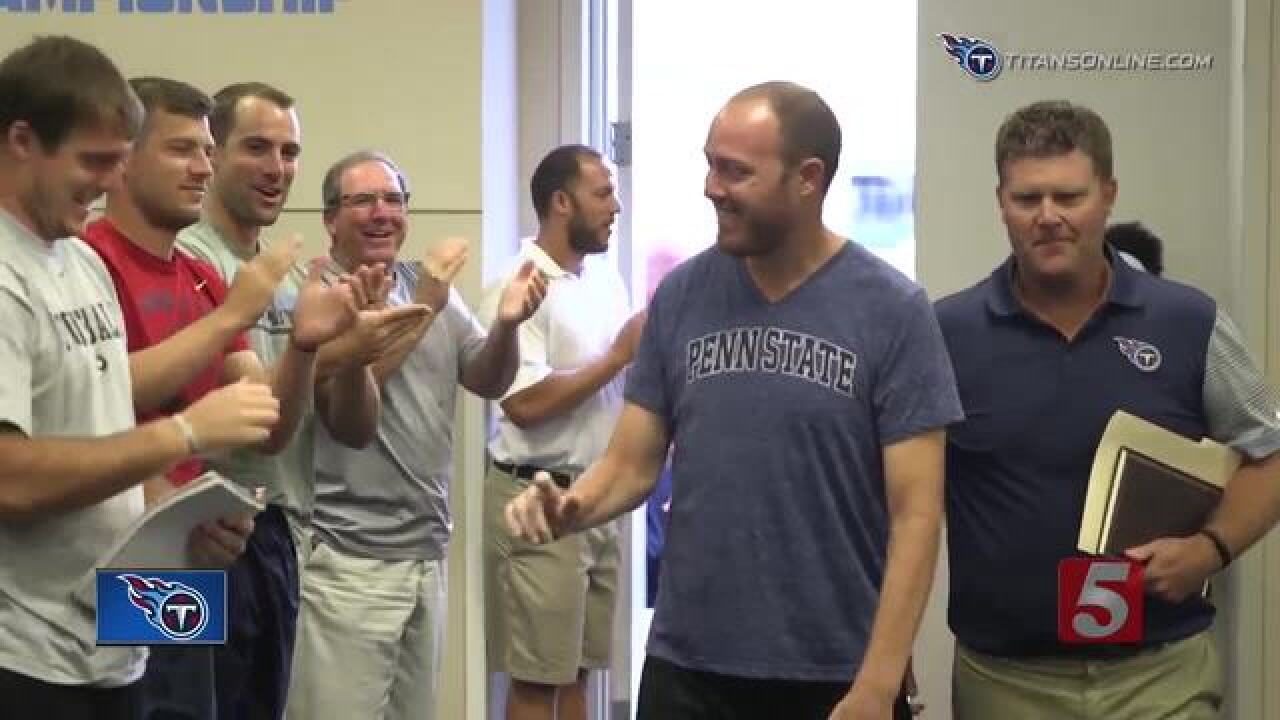 Tim Shaw never felt more alive than he did on a football field. He was a special teams star and NFL quality linebacker that played parts of seven seasons professionally before the devastating symptoms of ALS derailed his career and eventually forced his retirement. But Shaw hasn't let ALS prevent him from living his life or even making an impact on the field.

Shaw came to the Titans in September of 2010 after playing for the Panthers, Jaguars and Bears. He quickly proved himself as one of the league's best special teams players, earning the honor of being the unit's captain for the 2011 and 2012 seasons thanks to his stellar play.

But weakness on the right side of his body began to set in heading into the 2013 season, and his performance began to suffer. After being released by the Titans, Shaw sought out medical help to determine the cause of his physical deterioration.

The diagnosis was shocking.

"They said I had ALS," Shaw said matter of factly in a recent interview in his home in west Nashville. "The first stage you go through is denial. Then you deal with anger about why it's happening, sadness about what's happening, and then the fear about what will happen."

Amyotrophic Lateral Sclerosis is a devastating neurological disease that weakens muscles until its victims can no longer walk, talk and eventually breathe.

Shaw has steadily declined to the point that his once hulking frame is now frail, checking in at less than 200 pounds on the scale. He needs assistance to walk. But while the 33-year-old may be slowed down by the disease, he refuses to let it stop him.

"I hate how I look. I hate how I sound," Shaw said. "Every day is a struggle for me, but life is good. I choose to live every single day. I choose to fight. I choose to make the most of what I've been given. Because to me the alternative is to choose to be miserable until the end, and that doesn't sound fun."

Shaw's perseverance and positive outlook impressed Mike Mularkey so much that the newly named Titans head coach invited him to speak to the team. The message left an indelible impression.

"It kind of makes you take a step back and rethink life because really he could still be playing," Titans linebacker Avery Williamson said. "When he speaks, everybody pays attention and listens. It just makes you cherish it more, and embrace every moment that you get to be on the field."

The fact that Shaw was in player's shoes just a few short years ago, walking around the hallways at St. Thomas Sports Park as a player, is a startling reminder of just how fragile life can be.

Shaw's presence around the Titans' facility had such a positive impact that Mularkey and general manager Jon Robinson felt they needed to make him a permanent part of the team. In the days leading up to the 2016 season, they called Shaw to the front of a team meeting and announced he would once again be one of the team's captains despite the fact he officially retired from football nearly three years earlier.

Take a glimpse at the stretching lines before a Titans' practice or on the sideline on game days and you will see Shaw flashing a smile at another player. It becomes clear that the love is mutual.

Wesley Woodyard wears Shaw's old no. 59 jersey for the Titans, and helps Shaw walk to midfield for the coin toss with the other captains each week. Woodyard's family has been personally affected by ALS more than once, so the veteran linebacker takes significant encouragement from the way Shaw chooses to live his life despite the damaging effects of the disease.

"It says a lot about a guy that he's retired and he's (still) a captain," Woodyard said. "That tells you what he meant to the organization while he was playing and after he left. He motivates us every day to give it our all. He's in there coaching us up."

But Shaw brings far more to the table than just the decision to call heads or tails. He is a real life example of the importance of seizing the day because tomorrow is not promised.

One of the ever-optimistic Shaw's mottos is "live for today", a slogan the Titans printed on t-shirts at the beginning of the season. Mularkey wore that t-shirt for the team's final practice ahead of their trip to New England for Saturday's AFC Divisional Round game against the Patriots.

"It's great to have him around here," Mularkey said after that practice. "From that first time he spoke to our team two years ago, I think his presence has had a huge impact on where this team is at now."

It's Shaw's first ever trip to the postseason, and he's making sure to enjoy every single moment of it.

"This is incredible," Shaw said. "Just the energy in the locker room, in the facility. Anything is possible. We're good enough, we can do it."