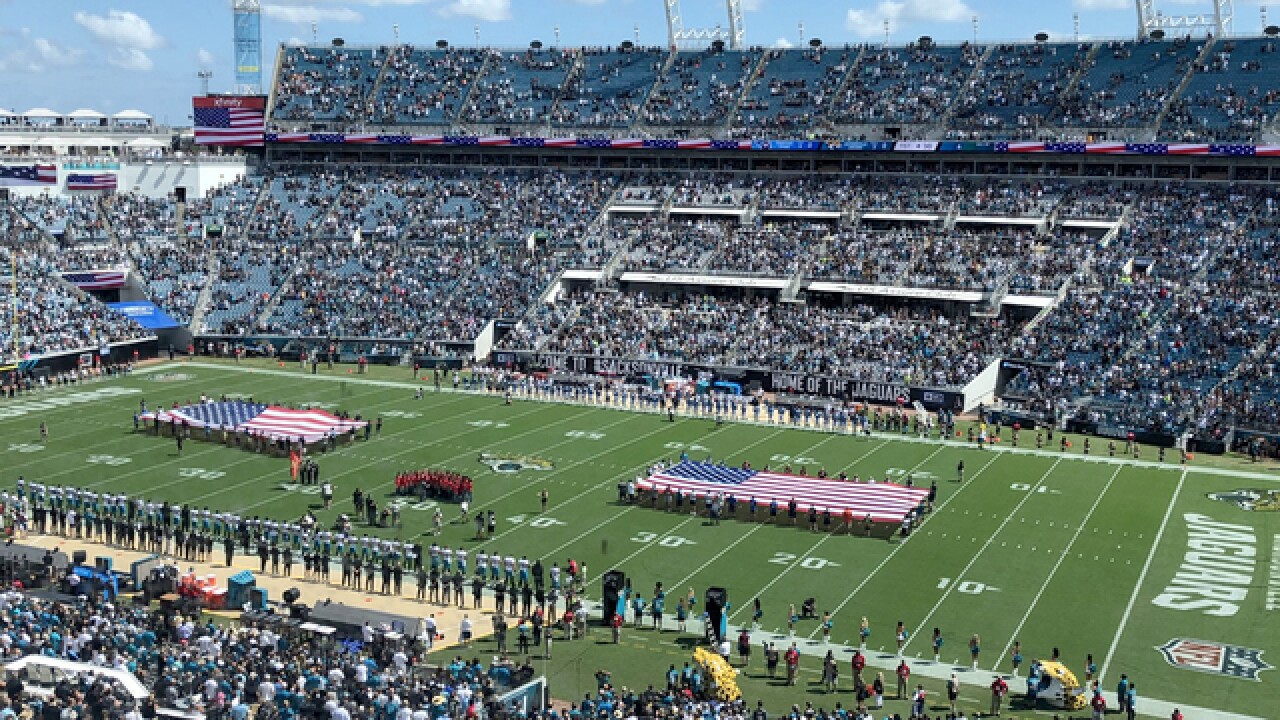 Marcus Mariota began Sunday afternoon standing on the sideline of TIAA Bank Field, expected to give his injured elbow a second straight week off. But an injury to backup Blaine Gabbert pressed him into action, and by the end of the day he was receiving a game ball for sparking the Titans to a win over the rival Jaguars.

Mariota came off the bench midway through the first quarter when Gabbert was knocked out of the game with an apparent concussion following a Malik Jackson hit. In his first relief appearance since high school, Mariota threw for 100 yards and scrambled for several gutsy first downs to help an anemic offense do just enough for a 9-6 win in a defensive slugfest.

“It was cool for me to be able to give Marcus the game ball,” Titans head coach Mike Vrabel said after the game. “He cares so much about this team. To be able to stay focused through the week. You saw him come in there and give us a spark, pick up some huge first down conversions and really seal the deal for us there at the end of the game.”

Not bad for a guy who wasn’t even supposed to play. Mariota says he was involved all week in the gameplan and agreed that a healthy Gabbert gave the Titans a better chance to win going into Sunday.

But when Gabbert went down he was ready to step in and do everything he could to help the team win.

“It’s a crazy game,” Mariota said. “When it comes down to it all that matters is finding ways to win. I’m really happy for these guys.”

Much like they did a week ago against Houston, the shorthanded Titans rode their defense and special teams to a tie game in the fourth quarter. But eventually a team has to score points to win, and once again the onus was on the Titans offense.

Jacksonville native Derrick Henry carried the ball seven times for 33 yards to get Tennessee into Jags’ territory. Then Mariota stood tall against heavy pressure and hit Corey Davis for a crucial third down conversion that set up Ryan Succop’s third field goal of the day.

“We just wanted to keep the ball in our hands, keep the clock moving and have a drive ending in points,” Henry said. “We were able to do that with the field goal.”

Mariota added, “When it comes down to it, we’re making plays. Hopefully we can continue to do that and build off this.”

Mariota’s numbers were not eye-popping, and he was still clearly limited trying to throw the ball downfield while struggling to grip the football because of his ulnar nerve injury.

He wore a glove on his throwing hand, but still managed to complete 12 of 18 passes despite three brutal drops from his receivers. And his playmaking ability, both in the pocket and on the run, proved once again why he is this team’s unquestioned leader.

“He’s a dawg,” Davis said. “That just says a lot about him to go out there and play hurt. That’s not easy to do, but he did it and hats off to him.”

No one gave the Titans a chance to win against the Jaguars and they took it personally. The amount of injuries this team suffered could derail the season for a lesser team, but this locker room has been undeterred.

Credit to first year head coach Mike Vrabel and his coaching staff for gameplans that worked around the injuries and gave this team a chance. And credit to the players for buying into the plans and thinking they could still win.

“It just goes to show how much we fight and stick together,” wide receiver Taywan Taylor said. “It just shows the identity of this team, of the offense. When adversity hits, coach talks a lot about being resilient and I think that was an example of us being resilient.”

They believed they could beat the Texans and Jaguars, and they did. Maybe the games weren’t pretty, but they count just the same.

And now the Titans are 2-1 on the season, and 2-0 in the AFC South, following their third straight win over their north Florida rivals.

“It wasn’t a big numbers day,” Davis said. “But we did enough and did what we had to do to come out with this win, and that’s all that matters to us.”

There’s still a lot of season left, and Mariota and the Titans offense are still nowhere near clicking on all cylinders, but they’re finding ways to win. And that’s a good start.

“Any time you can get a division victory on the road is critical,” Vrabel said. “It’s going to help you down the stretch, but now we’ve got (another) big challenge ahead of us next week back home. We’ll have to get healthy, but it’s easier to do all those things, to make corrections and get healthy after a win than after a loss.”