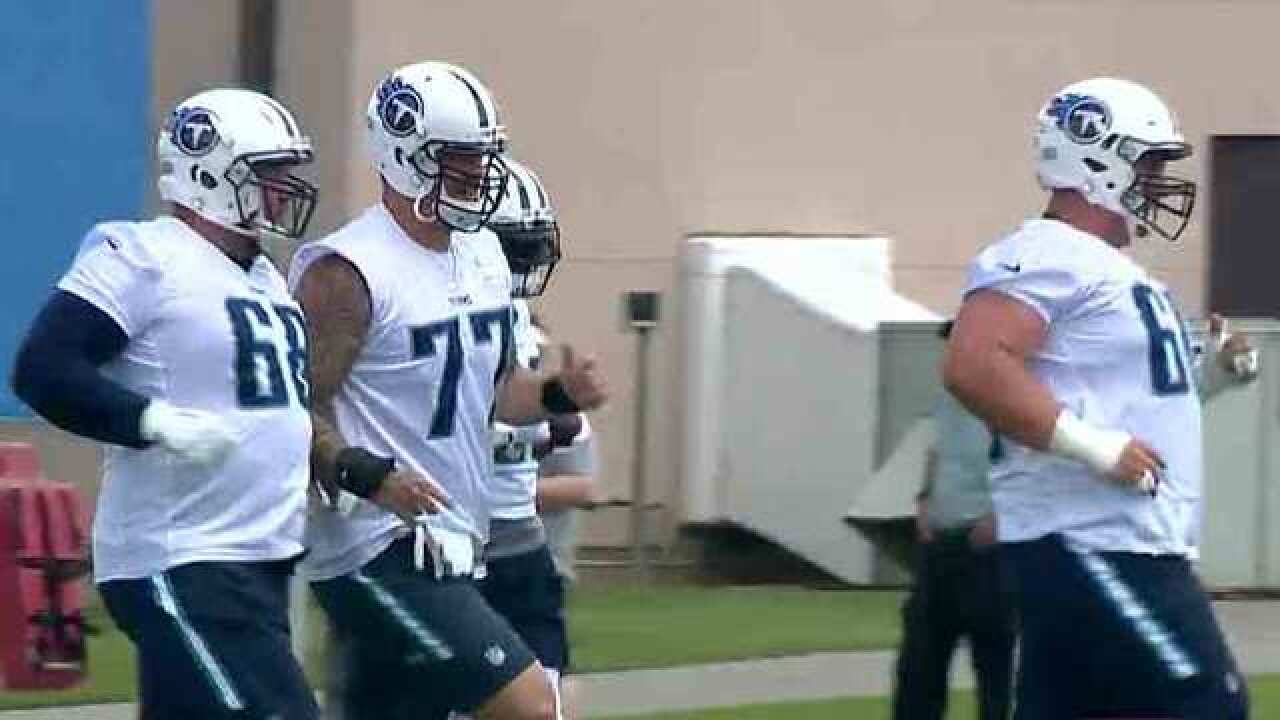 They say great offensive lines are built over time. For the Titans, it's been time spent hunting, hanging out and yes, even chugging beers together on national TV that's made as much of a difference as the time spent on the field.

For the first time in years the Titans return their entire starting offensive line this season, anchored by tackles Taylor Lewan and Jack Conklin around veteran center Ben Jones and guards Quinton Spain and Josh Kline. Five very unique personalities coming together as one on the field.

"We've got such a good group here," Lewan said recently after a training camp practice. "We hang out together, we drink together, we go to Preds' games together, so it's a good time that carries over on Sundays. It's awesome. It's like playing backyard football with those guys."

Jones, a sixth-year center who signed with the team in free agency before last season, serves as the quarterback of the offensive line, but the unit is anchored by Lewan. The 26-year-old left tackle and his larger than life personality serves as the unofficial spokesperson for the unit.  Whether it's talking about protecting quarterback Marcus Mariota better this season or planning a night out on the town, you can bet Lewan is in the center of it.

Drafted by the Titans in the first round in 2014, Lewan had an up and down first two seasons in the NFL, but came into his own last season when he graded out as one of the best tackles in football and was selected to his first Pro Bowl. He credits that success to consistency both on the field and in his personal life.

Lewan met his now wife, Taylin, after the 2015 season and the two were engaged in just over a month. This summer they welcomed their first child, a daughter named Wynne Rebel, into the world. Those two events seemed to have ever so slightly brought they ultra-aggressive Lewan into check.

"It's totally different, it's like your whole life was pregame up to that point when you become a dad, and then your life really starts," Lewan said. "It's awesome, I'm so lucky to have the baby that I do, but also the mom. She is all-time. It's a complete game-changer and really puts into perspective what's important and what's not."

Right Tackle Jack Conklin also became a proud papa this summer. Conklin garnered plenty of responsibility on the football field as well when he was thrust into the lineup from day one as a rookie last season. The eighth overall pick in the draft more than lived up to the hype, earning all-pro honors as the top right tackle in the game.

But the Titans are not worried about Conklin resting on his rookie laurels. This is a guy, after all, that has worked for everything he's gotten after receiving just one scholarship offer out of high school and then going from walk-on to All-American at Michigan State.

"There's somebody always on your back," Conklin said when asked what keeps him motivated. "At one point I was the guy trying to fight and crawl and bite everybody on the way up. I know what it's like to be on the bottom and I don't want to go back. That's what I think about every day and that's what motivates me."

In a sport where chemistry is difficult to fake, the Titans' offensive line genuinely likes one another, which makes for an interesting time in the locker room, but also makes for a tight-knit group on Sundays. They trust each other implicitly and are willing to go to battle for one another.

"You've got different personalities in all five of them and it's kind of a fun group," said Titans head coach Mike Mularkey. "But when it comes down to it, they are the type of players we want. They're smart, tough, physical and they work hard."

And they also like to have a good time, as evidenced by their beer-chugging, catfish tossing stunts that garnered national attention during the Predators' playoff run. But when the pads come on, this is a group that's willing to get down to business.

They paved the way for DeMarco Murray to rush for 1,279 yards last season, winning the AFC rushing title, an accomplishment the offensive line takes great pride in. They also gave up just 28 sacks last year, compared to a whopping 54 allowed in 2015.

The goal for this season is simple; be even better. And that's a goal that, at least according to Lewan, is attainable with this group.

"We want to be the best offensive line in the league," Lewan said. "We've got to protect Marcus and give our running backs opportunities to get yards, and we don't have to do anything more than that."

And if they do that, you can bet the Titans offensive line will be laughing and celebrating together. Probably all the way to the playoffs.