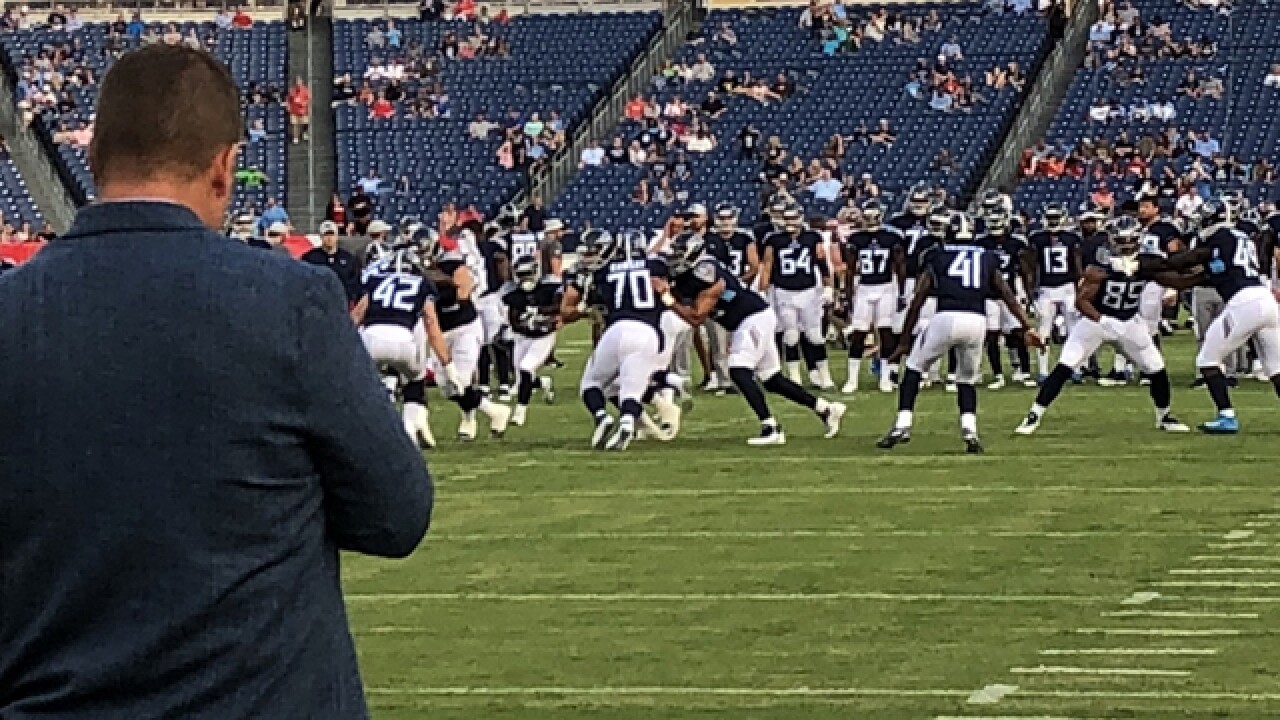 There are still three weeks until the games count and the Titans have a long ways to go, but they will take plenty of positives from Saturday’s 30-14 preseason loss to the Buccaneers that ended a week of joint practices in Nashville.

Here are some takeaways:

Midway through the first quarter the Titans faced a second and nine at the Tampa Bay 47. Marcus Mariota quickly unloaded a wide receiver screen to Taywan Taylor, who made a quick move, got a block from Nick Williams and then sprinted past everybody for a touchdown.

It was the first of two touchdowns on the night for Taylor. The second-year wide receiver also caught a four-yard TD Ross from Blaine Gabbert on the opening drive of the second half.

For the night, the former Western Kentucky star caught all four balls thrown his way for 95 yards and the two scores. A sign of the trust Titans’ quarterbacks and new offensive coordinator Matt LaFleur have developed in Taylor with top targets Corey Davis and Rishard Matthews sitting out the early part of preseason action.

The Titans first team offense converted a pair of third downs on the way to a 71-yard touchdown drive on their opening march last Thursday in Green Bay. After a punt on their first possession Saturday, the Titans struck paydirt with Mariota’s TD pass to Taylor.

The score capped a six-play, 75-yard drive that ended the starters’ nights. So far for the preseason, they’ve scored 14 points in three possessions.

Mariota finished 4-7 for 80 yards and the touchdown and should be pleased with the offense’s efficiency and lack of penalties and mistakes.

Arguably the best unit on the team during training camp, the Titans’ secondary left the preseason opener with a bad taste in their mouth. They surrendered a touchdown to the Packers in their only series of play, with Adoree’ Jackson giving up a pair of receptions and Malcolm Butler getting burned deep by Davante Adams.

The Titans bounced back by forcing a three and out against Ryan Fitzpatrick and the Bucs on the opening possession Saturday night, even without the services of Butler who was given the night off.

Tampa Bay was able to go 68 yards on 14 plays on their second drive thanks to a pair of third down conversions, but the Titans held them to a field goal before many starters exited for the night.

One of Mike Vrabel’s biggest frustrations from his debut game as head coach of the Titans last week was the team’s lack of discipline. That was evident again against the Bucs.

After being penalized for more than 100 yards against the Packers, the Titans were flagged ten more times for 124 yards Saturday night.

Vrabel can take some solace from the fact that his starters played a largely clean game. The only likely starter to commit a penalty was safety Kenny Vacarro, who led with his helmet trying to break up a Mike Evans’ catch along the sideline and was flagged for leading with his head under the league’s emphasized rules for helmet contact.

Still, penalties are an area Vrabel and the Titans must clean up before the regular season begins September 9th in Miami.

The Titans have now been outscored 61-31 in two preseason losses, getting outpaced by 21 in the second half of those two games.

Perhaps it’s a sign that the Tennessee roster isn’t as deep as we thought. Or, more likely, it’s just another sign of how meaningless the second half of preseason games are.

Either way, we should figure to stand out significantly more about the Titans when they travel to Pittsburgh to face the Steelers in the third preseason game next week.

The annual dress rehearsal game should see starters play at least until halftime against a Steelers team that won the AFC North last year.

Mike Vrabel leads the #Titans into locker room ahead of his first preseason game at Nissan Stadium. pic.twitter.com/sUpLvUtrXN