Titans Must Give Mariota Some Help 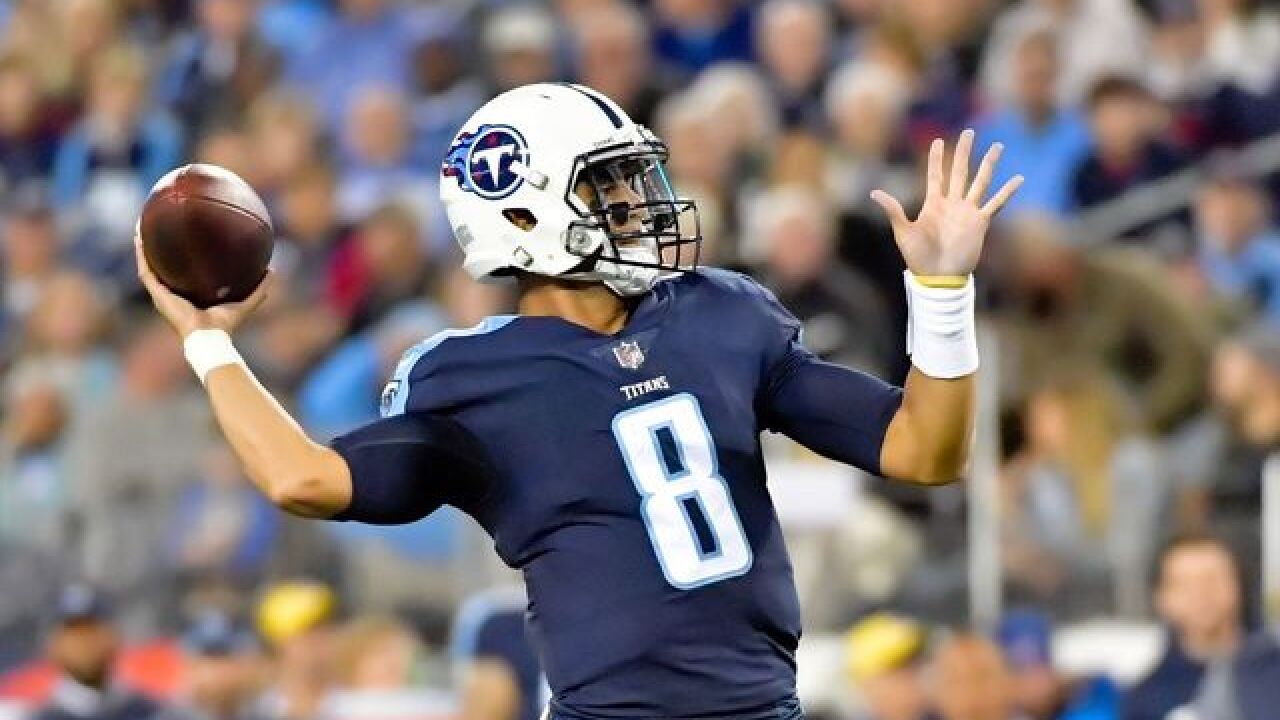 Marcus Mariota was short in his postgame comments following the Titans' 12-7 loss to the Cardinals in Arizona Sunday. Actually, he was "pissed off" by his own two interception performance that cost his team a chance to win a game in which the defense didn't allow a touchdown.

Mariota knows what's expected of him as a franchise quarterback selected 15th overall in the 2015 NFL Draft, and make no mistake he has to be better. The two interceptions against the Cardinals gives him a career-high 14 for the season in just 12 games. He has just 10 touchdowns after throwing for 26 last year.

For the Titans to bounce back from Sunday's loss and still compete for the AFC South title or even clinch a Wild Card for the franchise's first playoff berth since 2008, Mariota can't continue to struggle.

One of the league's most dynamic young talents didn't become pedestrian over an offseason. Although, the fractured fibula he suffered in week 16 last year certainly impacted his offseason preparation and training. Add in the ankle, shoulder and hamstring injuries he's suffered during the season and it's safe to assume he's nowhere near 100 percent.

But this season's regression is not all on him.

After surging into the upper half of the league in offense last season, bolstered by a running game ranked third, Tennessee was expected to have one of the most explosive attacks in football this season. But almost everyone on the offensive side of the ball have underperformed.

The offensive line which was tabbed as one of the best in football in the preseason has struggled to open holes in the running game and have allowed 10 or more pressures on Mariota in three of the last five games. DeMarco Murray led the AFC in rushing last season, but injuries have hobbled him this year, and, while showing flashes of greatness, second year running back Derrick Henry has been inconsistent.

Tight End Delanie Walker once again looks like a Pro Bowler, but Mariota has been unable to develop much of a connection with any of his other receivers. Rishard Matthews is the leading pass catcher among wide outs before missing two recent games with a hamstring injury, and appeared limited in his return against the Cardinals. Prize free agent pick up Eric Decker, while solid, has not become the type of impactful third down and red zone target he's been elsewhere in his career. Rookies Corey Davis and Taywan Taylor have shown us glimpses of play worthy of their draft positions, but have also made their share of miscues that have held them and the offense back.

Mariota's had multiple touchdown passes dropped this year, and had a potential TD Sunday float past Taylor before the third round pick even turned his head to find the ball.

None of that absolves Mariota of blame for the Titans' offensive struggles. When you're a NFL quarterback the buck stops with you, and Mariota has certainly made his mistakes. Sloppy footwork, poor mechanics and bad decisions have all been apparent in his play at times this year. He simply missed on two potential touchdown throws in the Cleveland game, and his second interception Sunday was forced towards a tightly covered Walker without any recognition of the linebacker dropping underneath for the easy pick.

Play-calling has also been an issue. Without a consistent rushing attack, head coach Mike Mularkey and offensive coordinator Terry Robiskie have been limited in their use of the team's play-action game, resulting in significantly fewer explosive passing plays this season compared to a year ago. And as the struggles on offense have mounted, they've been seemingly unable to scheme up any wrinkles that have worked to open things up and take some of the pressure off Mariota.

There's enough blame to go around on an offense that's averaged just 17 points per game over the past month. Expecting Mariota to just will them to the promised land without much help is probably unrealistic, especially considering the injuries he's suffered in the last 12 months.

Mariota must be better down the stretch, starting with Sunday's now must win game at San Francisco.

Without a consistent rushing attack or receivers reliably getting open, the Titans have been essentially asking Mariota to be perfect. And right now he's just not capable, or perhaps healthy enough, of shouldering that load by himself.

He needs to be better, but so does everyone else around him.