Titans Need To Reclaim Identity After Back To Back Losses 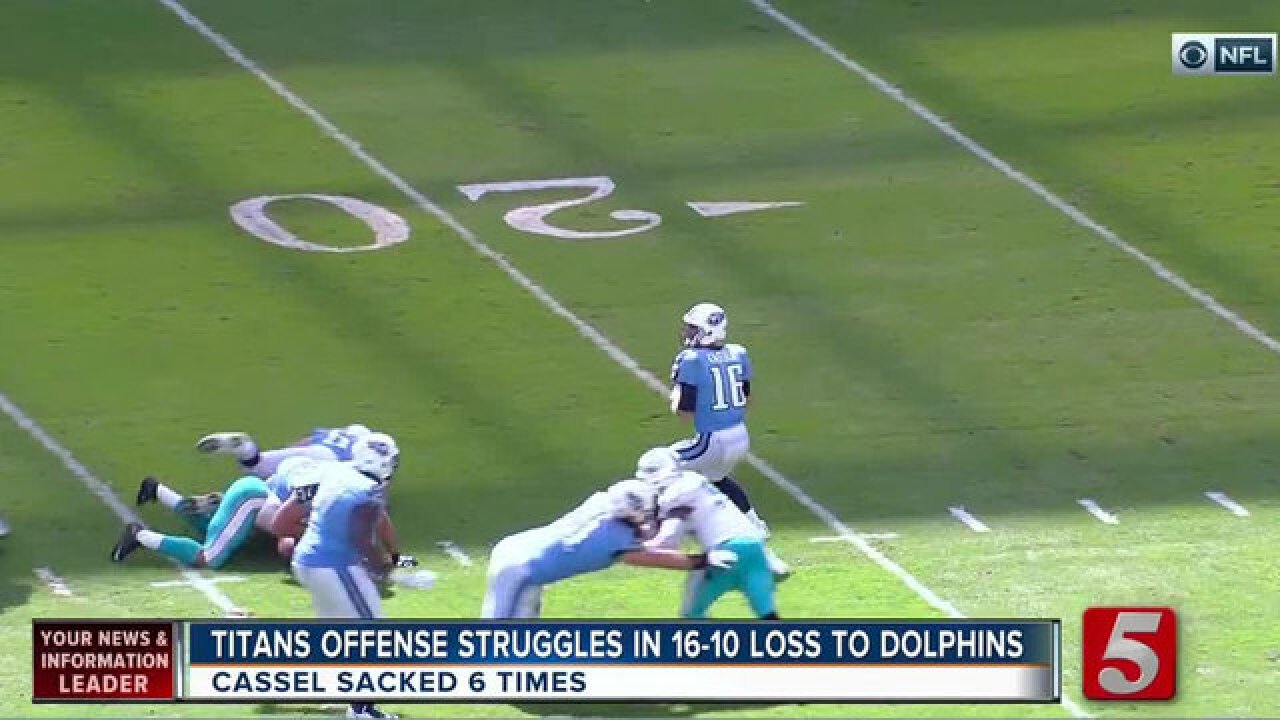 The talk around the gate for the flight bound for Nashville in Fort Lauderdale Monday morning painted a gloom and doom picture for the Titans.

"What an ugly game," one traveler said. "There was nothing good about it."

"I'm almost as sleepy as the Titans' offense," another commented while noting the early hour.

I opened up Twitter and football writer Peter King of the MMQB noted that perhaps the Titans just aren't as good as he (and many others) believed them to be entering the season.

Sunday's 16-10 loss to the offensively challenged Dolphins certainly doesn't make you feel good about where the preseason AFC South favorites stand. The offense looked hapless Sunday with Matt Cassel at quarterback instead of the injured Marcus Mariota, scoring just one touchdown in 15 drives.

This performance coming on the heels of a 57-14 beatdown at the hands of the Texans a week ago in Houston. It has been an unexpected turn of events. Two weeks ago the Titans handled the Seahawks for their second straight win and seemingly stood poised to grab control of the division. But now the questions are did the hype come too soon, and just how good can this team actually be?

To their credit, none of the Titans have wavered in belief. What was evident in the locker room Sunday was a frustrated group over a second straight poor performance, but resolve in the fact that they know they still have 11 games left to turn things around, and that they believe they know the recipe to play winning football.

The first part of that is absolutely true. The Titans have a great shot to get back to 3-3 Monday night with another division win against the Colts and could even go into the bye week with a winning record with the lowly Browns waiting after that.

And the division remains there for the taking. The Jaguars are currently the AFC South leaders at 3-2 and the Titans beat them by 21 in Jacksonville last month. The two-time defending champion Texans may have finally found their franchise quarterback in Deshaun Watson who threw five touchdown passes Sunday in a valiant effort against the unbeaten Chiefs, but also lost defensive MVP J.J. Watt (fractured tibial plateau) and rising star Whitney Mercilus (torn pectoral) for the season.

Right now the biggest question for the Titans remains their play. This was a team that burst onto the scene a year ago by physically punishing people in the trenches. They had one of the best running attacks in football, DeMarco Murray rushing for an AFC-best 1,287 yards, and were equally good at stopping the run on defense, ranking third in the NFL.

But so far this season it's been a different story. The offensive line hasn't been able to reclaim it's dominant form. With Mariota out Sunday they were challenged to set the tone for the day and dominant up front against the Dolphins. Instead, the Titans managed to run for just 69 yards on 20 carries and surrendered six sacks.

The defense played great Sunday, albeit against the dysfunctional Dolphins, but remains a concern with a bottom 10 ranking in every major statistical category, including their once stout effort against the run.

There are a lot of reasons to point to for the Titans' recent struggles; Mariota's injury, a porous secondary and even officiating mistakes Sunday. But the bottom line is the Titans need to reclaim their identity.

A year ago it was dubbed "exotic smashmouth". Right now it's neither. And for the Titans to become the team many expected them to become this season they need to get back to their physical ways of last season and dominate in the trenches.

There's still plenty of season left so it's no time to panic. But it is time for the Titans to look in the mirror and remember what makes them go.