Did the Tennessee Titans 22-21 come-from-behind victory over the Chiefs in the AFC Wild Card Game save Head Coach Mike Mularkey's job? Perhaps it did.

On Saturday morning, numerous national reports surfaced saying Titans upper management had gone sour on Mularkey and a coaching change was being considered pending the outcome of Saturday's game, despite the fact the Mularkey had led the Titans to back-to-back winning seasons.

After the game, an emotional Mularkey called the reports "ridiculous" and added that he was not given assurances of his job security. (It has since been reported Mularkey's job is safe).

In a jubilant Titans locker room after the game, several of Mularkey's players expressed their support for their coach.

"Coach Mularkey has done a great job keeping us together," said quarterback Marcus Mariota, whose 2 touchdown passes in the second half (one to himself) spearheaded the comeback win over Kansas City.

Linebacker Brian Orakpo was a little more colorful in his remarks calling the rumors "(Bleeping) crazy."

Tight End Delanie Walker said he was one of the players who campaigned for Mularkey to be named head coach two years ago and added: "He's done a great job."

One thing is certain, Mike Mularkey will be the head coach of the Titans when they play in the AFC Divisional round next weekend. 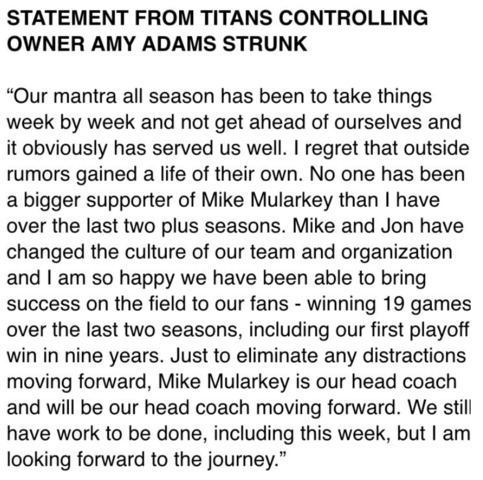