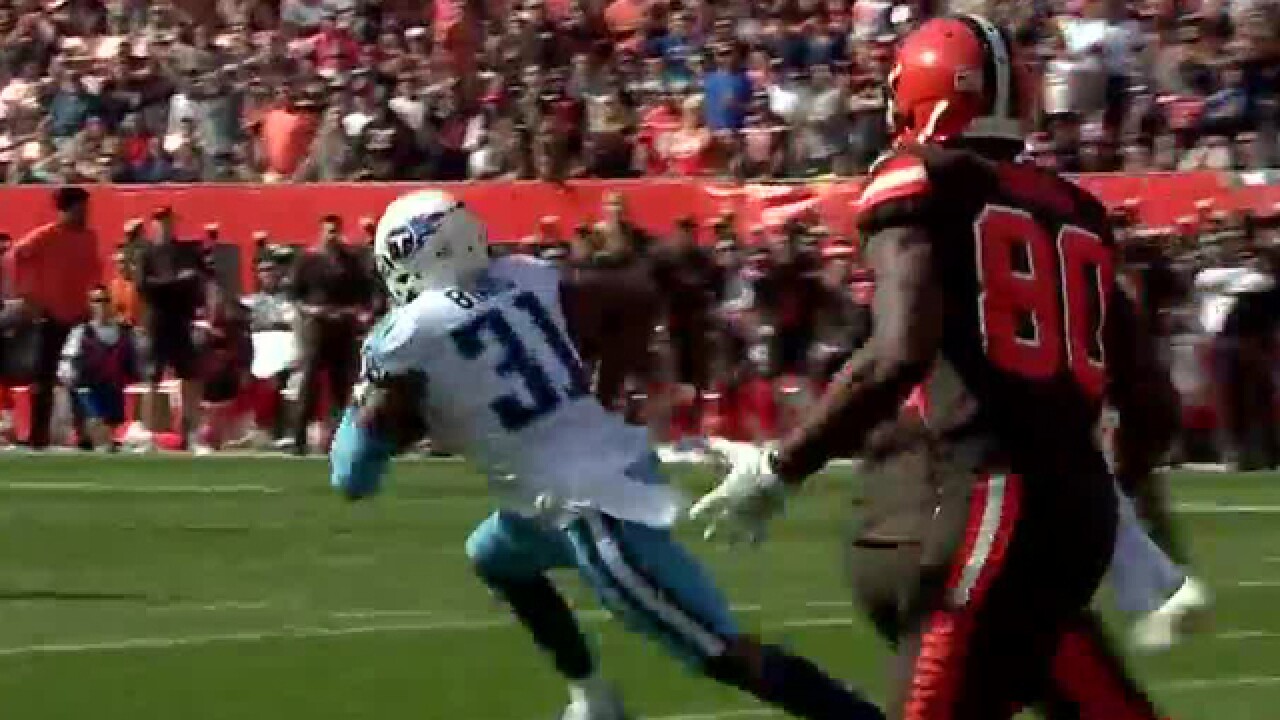 Phew! Everybody exhale. It wasn't pretty, in fact it was quite ugly, but the Titans managed to escape Cleveland's Dawg Pound with a 12-9 overtime win over the Browns thanks to four Ryan Succop field goals. The final one came with 1:55 left in OT and sparked a wild celebration on field as if the Titans had just won the Super Bowl.

In reality, it was just a week seven victory over the winless Browns, and the postgame celebration was more relief than euphoria. But in the NFL they don't ask how you won, only how many wins you have, so the Titans will gladly move on from this close call knowing they are 4-3 and tied for first place in the AFC South, entering their bye week having avoided what would have been a back-breaking loss.

The Titans started out strong offensively, moving the ball 45 yards on 11 plays during their opening drive, but, as has become a theme for the offense during the first half of games this year, they stalled out and had to settle for the first of Succop's field goals. Tennessee managed just two field goals on five first half possessions Sunday, and has now scored just three first half touchdowns in seven games this season.

For the year, the Titans are averaging just over eight points per game in the first half, or just more than a point per possession. That's not going to get it done routinely.

Nor will the effort they got Sunday from quarterback Marcus Mariota, who is yet to throw a first half touchdown pass this season.

Undoubtedly still limited by the hamstring injury that sidelined him for the second half of the Houston game and all of the Titans' loss in Miami, Mariota once again was a one-dimensional quarterback forced to operate strictly from within the pocket. But unlike Monday, when he effectively dissected the Colts' pass defense throwing for more than 300 yards, he was unable to find a rhythm against Gregg Williams' blitzes and a surprisingly tight Browns' secondary.

There was the first and goal opportunity from the Cleveland one-yard line that resulted in zero points. DeMarco Murray was stopped at the line of scrimmage on first down, Mariota woefully underthrew a wide open Delanie Walker for a would-be touchdown on second down and Murray was again stuffed on third down. Mike Mularkey elected to keep his offense on the field in an attempt to get the game's first touchdown on the board, but Derrick Henry was stopped short of the goal line on fourth down and the Browns' defense held.

Mariota had another shot on the opening play of the fourth quarter with Walker streaking into the endzone, but again his pass was underthrown and Cleveland linebacker Christian Kirksey was able to bat it down and force the Titans to settle for another field goal.

The story of the day was the Titans' defense, which surrendered just nine points on 284 total yards. Second-year safety Kevin Byard intercepted three passes, two from rookie starter Deshone Kizer and one from Cody Kessler, snuffing out any momentum the Browns seemed to generate.

The pass rush was active all day, but when the game was on the line in the fourth quarter and overtime it took over. Derrick Morgan (1.5 sacks) and Brian Orakpo (.5 sack) continually blitzed an offensive line that played the second half of the game without All-Pro left tackle Joe Thomas, who saw his incredible streak of 10,363 consecutive snaps played to start his career come to an end with a triceps injury in the third quarter.

In overtime the Titans forced consecutive three and outs, buoyed by that pass rush. Morgan and Orakpo's shared sack on third down of the second drive forced the Browns to punt out of their own end zone and set Tennessee up with solid field position. That's when Mariota found Rishard Matthews for a rare third down conversion to get into field goal range to set up Succop's heroics. But even that didn't come without a bit of drama.

The Titans snapping the ball just after the 2:00 warning and Succop's kick, which did not count, bounded off the upright. Given a reprieve much like he got before his last game-winner in frigid Kansas City last December, Succop regrouped and was ready for his second chance, drilling the 47-yard kick right down the middle for the win, and extending his NFL record for consecutive field goals made inside 50 yards to 55.

The Titans needed every single one of them Sunday.

It was not a pretty effort, but a win is a win, even over the Browns.

And while you can debate whether or not the Titans look as good as their record and place in the standings suggest, you can not debate the importance of somehow finding a way to win against a Browns team that seemingly keeps finding ways to lose, now with four of their seven losses coming by three points or less.

There are still big questions about this Titans' team's quest to breakthrough in the division and in the AFC that they will have to look long and hard at addressing over the bye week. But the Titans will get to look at those while sitting in first place with a pair of home games awaiting them when the calendar flips to November.

And that's much better than the alternative, no matter how ugly Sunday's win was.