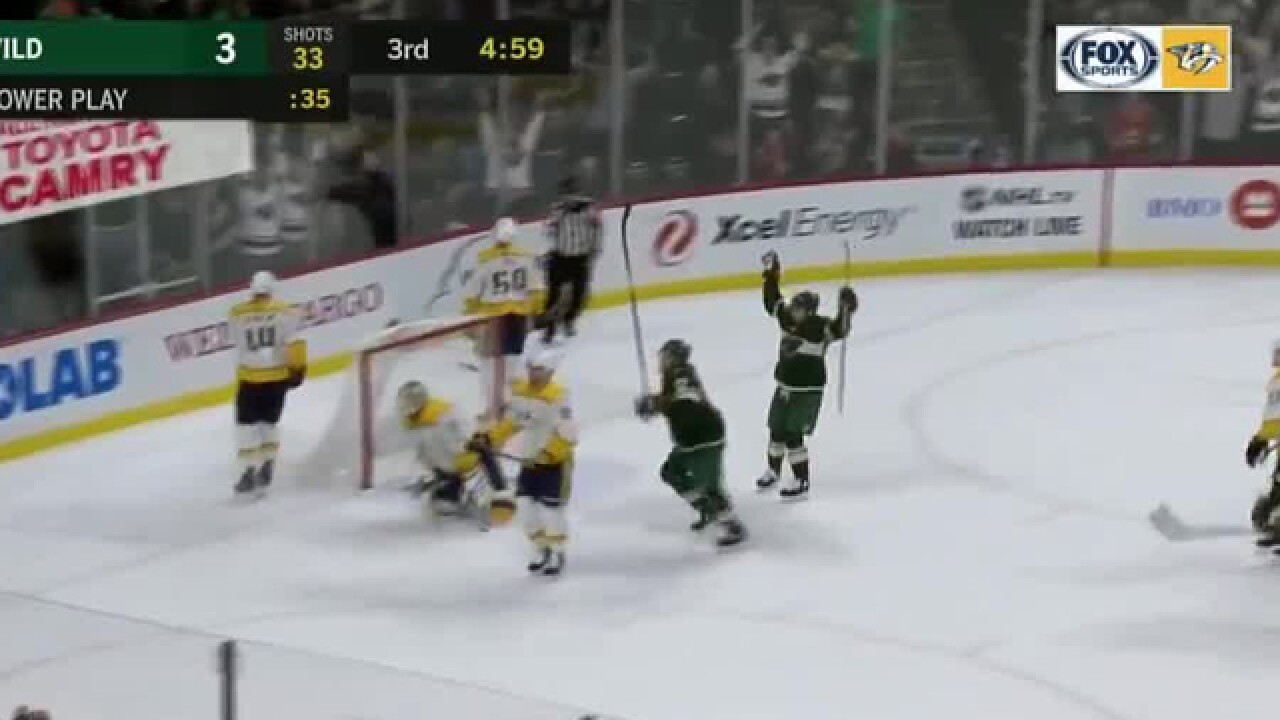 Jason Zucker scored with 2:55 left and the Minnesota Wild scored four goals in less than six minutes in the third period to beat the Nashville Predators 6-4 on Thursday night.

Eric Staal had a goal and two assists for Minnesota, which won its fourth straight.

On the winner, Mikko Koivu fought off a defenseman into the left corner and centered to Zucker in front. With two defenders nearby, Zucker sent a backhand shot past Pekka Rinne for his eighth goal in five games.

Wild goaltender Devan Dubnyk with a franchise-record shutout streak of 195 minutes, 5 seconds. That ended 49 seconds in when Ryan Johansen converted a pass from Filip Forsberg, the first goal allowed by Dubnyk on 108 shots. He finished with 26 saves.

Roman Josi, Mattias Ekholm and Viktor Arvidsson also scored for Nashville, which lost for the first time in six games.

Trailing 4-2 in the third, Suter tipped in a Spurgeon after a feed from Staal with 6:56 to go.

Nearly two minutes later, Staal hustled in from the left circle to push a loose puck past Rinne after Marcus Foligno couldn't handle a centering pass.

It was the first tally of the year for Johansen, who signed an eight-year, $64 million contract in July. He has 11 assists in 18 games. He added two assists for his first multipoint game since opening night.

Josi scored 5:31 into the second and Ekholm scored seven minutes later after Minnesota didn't get a shot during a 32-second two-man advantage. With the Wild still up a man, Ekholm intercepted a pass at the Predators' blue line, went in alone, and beat Dubnyk on the stick side for Nashville's first short-handed goal of the season.

It was also the first such goal allowed this season by Minnesota.

However, Niederreiter scored with the extra player with 38.3 seconds left in the second to get the Wild within 3-2, besting Rinne with a slapshot from the slot.