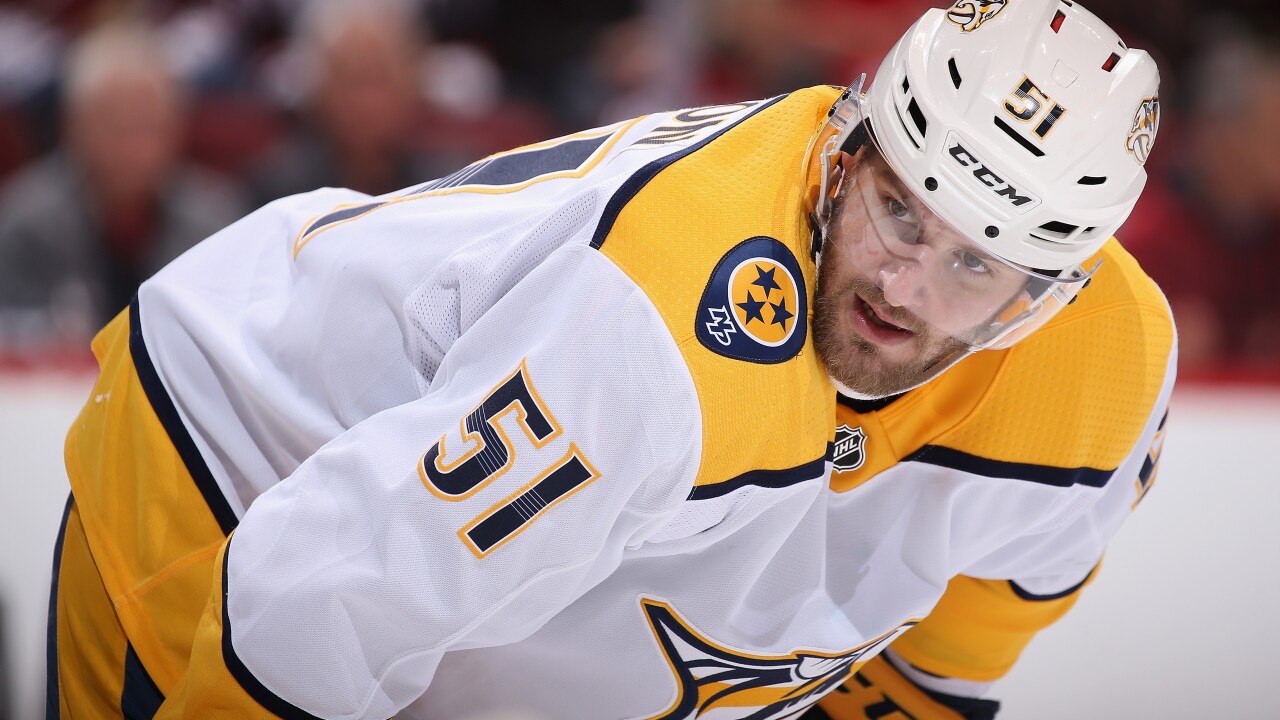 NASHVILLE, Tenn. (WTVF) — Nashville Predators right wing Austin Watson, who turns 26 on Sunday, says in a new Instagram Post on Friday that he's battled anxiety, depression and alcoholism since he was 18 years old.

The post, which features note written by Watson on an iPhone, also discussed the assault allegations that ultimately led to an 18-game suspension.

"I have dealt with anxiety, depression and Alchoholism since the age of 18," Watson wrote. "I maintained sobriety for 23 months until the middle of May, 2018, when I began drinking. After the events on June 16th, I voluntarily entered the NHL SABH Program, and I am currently sober and committed to living a healthy lifestyle so that I can be the father, partner, teammate and person I want to be."

The SABH program is shorthand for the NHL and NHL Player's Association (NHLPA) Substance Abuse and Behavioral Health Program, which is a confidential program for players.

The June 16th incident Watson referenced involved Watson and his domestic partner. It ultimately resulted in Watson pleading no contest to a charge of domestic assault on July 24, 2018. Watson was initially suspended for 27 games, but it was later reduced to 18.

"I take full responsibility for my involvement in the argument and have learned from the situation and taken the necessary steps to ensure that nothing of this nature happens again," Watson wrote. He also states that the two were involved in a "nonphysical" argument on that day while saying he "did handle matters that day poorly."

As for the reasons behind the post, Watson wrote, "Mental Illness runs rampant in the world today. In my experience it can often feel lonely, consuming, and at times unbearable. Please know that you are not alone. There are so many of us who seem to have the picture perfect life, no problems in the world. Yet I deal and I battle just as much as and no more than the next person."

You can see the entire post for yourself below:

As my 26th year comes to an end in a couple days, I’ve found myself reflecting lately. In doing so, I’ve felt a deep urge to be a bit more open. After lots of prayer and contemplation, I’ve found that there’s one thing I need to share that’s been a part of my life and anyone else’s life that’s been close with me for quite some time. With Jennifer’s permission to use the word “we” in certain places, the picture above is a note that’s been sitting in my phone for what seems like ages. It’s a condensed version of some words I’d had gone back and forth with releasing as a statement as I returned to the ice. While I won’t go into any more of my family’s and my personal life, because it still isn’t the right time for us and to not create another individual distraction in the midst of our team’s season, I found it only fair to share briefly of my story. Mental Illness runs rampant in the world today. In my experience it can often feel lonely, consuming, and at times unbearable. Please know that you are not alone. There are so many of us who seem to have the picture perfect life, no problems in the world. Yet I deal and I battle just as much as and no more than the next person. I’ve been blessed with many obstacles, traumas and hard times to overcome. Doing the next right thing doesn’t always seem easy, but it’s worth it. Perspective is everything to me, and when I look at the beautiful and downright amazing things in my life that I feel unworthy of, I realize how fortunate I am to be me. If you’re feeling alone today, you’re not. If you feel like no ones cares, I do. If there doesn’t seem to be any chance of it getting better, believe me it will. I hope I’ve helped someone today the way others who’ve shared have helped me. P.S. to the esteemed members of the local and national media, I still won’t touch on either matter past what I’ve said above at this time. Thank you for your courtesy, respect and understanding. On a lighter note I’ve also accompanied this post with Jennifer and I’s beautiful #adidas model. She puts a smile on my face every time 😊. #mentalhealth #mentalhealthawareness #mentalillness #hope #grateful #thisisus #giveback #longwinded 🤦‍♂️